Mississippi Trial, 1955: A Book Review and a Writing Exercise

I recently submitted the fourth draft of Half-Truths to Rebecca Petruck for her critique. In a future blog I'll clue you in on my marching orders for Draft #5, but today I'm sharing a specific part of her feedback about writing scenes. This is a longer blog than normal, so grab your favorite beverage and get ready to learn about a great book and about the writing craft.

Craft-wise, writing scenes is your weakest element. That’s partly why I asked you to write the slow down scene. You might want to read Make a Scene by Jordan Rosenfeld. For exercises, I suggest choosing a few scenes from three novels and deeply analyze the arc—what did the MC want as she entered the scene? What did she get? How did the author show the external action? The internal action/reaction? How much dialogue is used relative to narrative text? How did the author set the scene? End it?

The first novel I chose to study scene making was the award winning book, Mississippi Trial, 1955 by Chris Crowe. I anticipated learning more about Jim Crow. I gained that, and much more. 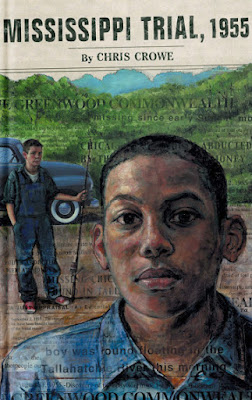 As a young child, Hiram spent several years in Greenwood, Mississippi living with his paternal grandparents. He has fond memories of Grampa Hillburn and a town steeped in cotton and Southern traditions. Hiram doesn't understand the deep conflict between his father and grandfather and blames his father for the alienation between the two men.

At 16, Hiram returns to Greenwood after his grandfather suffers a stroke and meets Emmett who is in town visiting his uncle. Hiram reconnects with R.C. Rydell, a boyhood friend who drinks too much and bullies Negroes; and R.C.'s sister Naomi who he likes. R.C. convinces Hiram to go fishing together, and the two meet up with Emmett who is cooling off in the river. R.C. mercilessly bullies Emmett while Hiram stands by helplessly. Afterwards he feels ashamed of himself and later becomes convinced that R.C. was involved in Emmett's death.


When I put the newspaper down, my hands were shaky and cold. Emmett was dead, murdered. The article said nothing about R.D. Rydell, but I figured the sheriff must still be looking of him. Was R.C. involved in the murder? I knew he was, and I hoped the police would find him--soon.

And what about Naomi? If R.C. skipped town or ended up in jail, she'd be left alone with her dad. I didn't even want to think how much more miserable her life might become in that shack down along the Yazoo.

Grampa interrupted my thoughts when he whistled softly after reading the article. "I can't believe they killed that boy." He rubbed his hand across his face and muttered to himself, "There's going to be hell to pay now." He still looked pale as he folded the paper on his lap, creased it carefully in half, and set it on the table next to his chair. "Hiram, those boys went too far, way too far. For his sake, I sure hope your friend [R.C.] wasn't involved in this mess. I never did think much of R.C. Rydell, but I never took him for a murderer."

"R.C.'s not my friend, Grampa," I reminded him without looking at him. "I told you how he acted."

"Of course he's not your friend. A Hillburn usually has better sense than getting mixed up with people like these." Grampa rapped his knuckles on the folder newspaper. "People all over the United States are hearing about what's happened down here and wondering what kind of uncivilized brutes live in Mississippi. Those peckerwoods who did this are a shame to all of us in the Delta. No self-respecting Southern gentleman would lover himself to of this far."

Grampa's reaction bothered me. He seemed more concerned bout the negative press than about what had happened to Emmett Till.

He kept on complaining. "The radio said that colored boy's mama up in Chicago is blaming everyone in Mississippi for what's happened, said she said, 'The entire state of Mississippi is going to pay for this.' The woman's grief is understandable, Hiram, but she's go tho cause to blame all of us for what a couple redneck peckerwoods did in the middle of the night.

"Before we know it, the NAACP and all those bleeding-heart Northerners are going to use this as another excuses for integration. They're going to come down here and cry about how we treat our Negroes and how we've got to mix the races in our schools. That's what really makes me mad, son: Those ignorant boys have stirred up a hornet's next of trouble."

"But what about Emmett?" I asked. "They killed him. Doesn't that make you mad?"

"Of course those boys went too far. Whatever that colored boy deserved, he didn't deserve getting shot and tossed into the Tallahatchie, that's for sure."

I wanted to yell at Grampa. A boy was murdered just for acting cocky! I wanted to say something, something mean and hard that would knock some sense into him, but I knew nothing I could say would change him, and I had a glimpse into why Dad and Grampa never got along. (p. 123-5)

What did the MC want as he entered the scene?
Hiram wants comfort/justice over Emmett's death.

What did he get?
He got a "glimpse" into why his father and grandfather don't get along, and a new picture of his grandfather.

How did the author show the external action?
Reports the grandfather complaining, shows Hiram arguing.

The internal action/reaction?
Hiram's observation that his grandfather was more concerned about negative press than justice is a huge "Aha!" moment. His appreciation for his father initiates a change in his attitude.

How much dialogue is used relative to narrative text?
Dialogue and internalization carried this scene; not much narration.

How did the author set the scene?
"When I set the paper down." Opens the scene.

End it?
With Hiram's new realizations.
********
I picked this scene because it was pivotal to Hiram's burgeoning questions of the culture he accepted as a child as well as his new understanding of the tensions between his father and grandfather. The reader sees Hiram's conclusions so that when there is a switch at the end, Crowe has paved the way for a surprise ending.

Rebecca has told me before that I need to go deeper into my character's internal experiences (I guess I'm a slow learner!). But copying out a scene pushed me inside Hiram. I saw his grandfather and father in new ways and found a model for what I needed to work on in Half-Truths.

How about you? Have you ever deeply studied a scene from a novel? If not, I hope you'll try this exercise. If you have, what book did you study? I'd love to hear from you.

And I hope you'll read Mississippi Trial, 1955. You won't regret it; and besides, you need to discover the surprise ending which wraps up this important book so well.

Thanks for walking us through this exercise on scene building. It was very helpful, especially for us "pantsters"!

Glad you liked it, Linda. I know this is not your usual way of writing. But maybe you'll try it on your next book!

Carol, good advice and example. And yes, since scenes are the building block of story, I have to return to the basic exercise of goal and conflict in each scene when I'm revising. And of course, the outcome, which should put the protagonist in greater doo-doo than before.

great way of putting it, Vijaya! I have to remember to do that with EACH SCENE! Yikes. So much to think about!

Outstanding post. You and Rebecca make a terrific team. I saved this one for future reference. Thank you! Keep up the good work.

Thanks, Linda. So glad my blog is helpful to you!

This is very instructive and useful. Thanks for such a detailed post and for sharing all this with us.

Glad it was helpful to you, Rosi.

Carol, great post. Thank you so much for sharing your writing journey. Rebecca's suggestion about reading a scene is one I am filing away for the future. Creating a scene in my writing is where I tend to get stuck. Now, I have to find MISSISSIPPI TRIAL:1955 to see what the surprise ending is!

Thanks, Kathy. Glad it was helpful and I hope you read Mississippi Trial!