Orchards: A Review and a Giveaway

This is a two-for-one week as I review and give away two books on the theme of bullying which Joyce Hostetter and I tackle in the spring issue of Talking Story.

From the number of novels-in-verse that I review, you may guess this is a genre close to my heart. Ever since I was in high school and poured my heart out in free verse, I've admired this genre. But there is more than a world apart from my attempts and beautifully written novels such as THE GOOD BRAIDER, BLUE BIRDS, CRAZY, THE KISS OF BROKEN GLASS. I am consistently impressed with these authors' ability to tell well-plotted stories using succinct, figurative language.

Let's add ORCHARDS by Holly Thompson to this list. 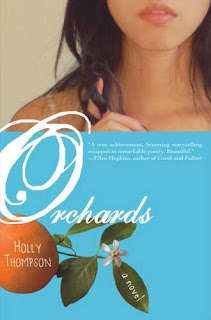 (Please note that the line spacing in the following excerpts are not an exact replica of the book's poems. I had difficulty formatting these poems for this blog.)

Half-Japanese, half-Jewish American, Kana Goldberg is sent to her mother's ancestral home in Japan for the summer. A bullied eighth grade classmate (Ruth) committed suicide at the end of the school year and although Kenna wasn't the bully, she didn't stop it from happening. Working in her mother's ancestral mikan orange grove, she deals with her anger, guilt and grief and comes home a stronger young woman.

because of you, Ruth
I'm exiled
to my maternal grandmother, Baachan,

to the ancestors at the altar

and to Uncle, Aunt and cousins

I haven't seen in three years--

not since our last trip back

she was just right

but told me I was fat

no more each meal

I try to learn fast

make up for my

how are we supposed to eat...


I rush to set out chopsticks...

they seem to think

I can just switch

one half of me
on and leave the other
half of me
off but I'm like
warm water
pouring from a faucet
the hot
and cold
both flowing
as one (p. 24-5)

In Japanese school, Kana tries to reach out to a girl she perceives is an outsider, because that's what her school counselor had said she and her friends should have done for Ruth.


but instead of opening up to me

instead of warming to me

instead of reaching out


in return
she pivots

and walks away.
after that

not everyone is so eager

to get to know this New Yorker not everyone so hot

to try their English

so much to me now

maybe because I know

most atoms aren't as stable

She has a negative opinion of her deceased grandfather, but when she realizes he was operating out of his own hurt over her mother's leaving Japan, she recognizes there are two sides to every story.

there must be at least

to your story, too, Ruth,
and maybe knowing

more of Lisa's side

When school ends Kana works long days in the family orchard. There she thinks about Ruth:

when a person says certain things

they don't mean the words

in the note you left

in front of all us girls

after Jake handed you

a piece of paper

Lisa had given you


I hope you die

I saw you glare

bitch we all said

as you crumpled that note into a

tiny ball that was still

in your jeans pocket

Kana's grief doesn't stop there; her world continues to painfully unravel. But by the time she returns to New York she has found a new home with her mother's family and a new way to go on living.

Joyce Hostetter and I are giving away this book in conjunction with Talking Story's current issue on bullying. You can leave a comment either here, or through the newsletter. Do both, and your name will be entered twice.
at March 16, 2016

You know I would love this book. I shared your newsletter and with this comment, does that count for twice??

Of course it does, Linda. And YES. You would love this.

Thanks for telling me about this book. It sounds very interesting. I will check out Talking Story. Please let someone else win. Still packing here!

The author's voice pulls me in. I especially liked the body image sections and reference to atoms. What a great read! Thanks for sharing another winning title and review.

Thanks, Linda and Rosi for leaving comments. Linda, you're in!

This post was a painful reminder (in a good way) of the teenage world and how tough it is to grow up in the microcosm of the school world with its intense peer pressure made all the more terrible when a bully's at the helm.

Thanks for all the recommendations of books in verse, Carol. Don't include my name this time. I'm still whittling away on my stack.

I'm really intrigued by this one. Books in verse and other different approaches to timeless situations are on my mind lately!
Mary Jane

Thanks for stopping by Clara and Mary Jane!

There has always been bullying but it breaks my heart to hear about the methods that are now used. Thanks for sharing some of the content of Orchards.
Connie
cps1950(at)gmail(dot)com

Thanks, Connie. I have entered your name twice since you left me a comment on Talking Story.

Sounds really interesting. Teens have very thin shields. So tough to be a teen. A time I would not wish to revisit.

You're right on all accounts, Elena. thanks for your comment. Entered your name in the giveaway.

Sounds like a wonderful book and I look forward to reading it. Many thanks for sharing news about it here.

It is a wonderful book, Jo. I'll add your name to the list.