The Hired Girl: A Review and an Audio Giveaway

One of the highest compliments you can give an author is to finish their book and want to read it all over again. In the case of The Hired Girl, by award-winning author Laura Amy Schlitz, that's exactly what I did; happily spending hours on a recent car trip reliving the world of Janet Lovelace, hired girl. 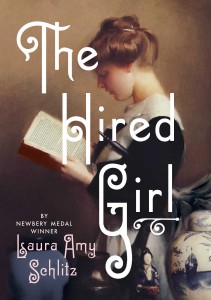 Pour yourself your favorite beverage and take a few minutes for this review. I'll try hard not to include too many spoilers.

Fourteen-year-old Janet, who changes her name from Joan Skraggs when she arrives in Baltimore in July, 1911, is a character female readers of all ages will enjoy. Raised on a Pennsylvania farm, there is little she cannot do-- pluck chickens, beat rugs, or put up food for the winter. But her insatiable desire to become educated, "noble and courageous" irritates her father. When he burns her books because he believes reading takes up too much of her time, Janet receives the catalyst she needs to leave home.

Janet's beloved school teacher's end-of-the-year gift is a journal. This diary becomes Schlitz's vehicle to tell Janet's story. Although some readers might find this contrived, I loved it. I was totally immersed in her deep POV. Janet's longing for her dead mother; frustration over her father and brothers' rejection; desire to be a "proper young lady" who frequents the opera, museums, and fashionable department stores; her head-over-heels infatuation for a most unsuitable love interest; her melodramatic observations about herself and other characters; plus her plucky and hopeful attitude, create a totally authentic and often humorous young woman.

She comes to Baltimore to find employment as a hired girl. She arrives too late to find a room in a boarding home and resigns herself to having to spend the night on a park bench. Fortunately for her, she meets a young gentleman, Solomon Rosenbach, who brings her back to his home with the hopes that his mother will allow her to stay. One of my favorite lines is when Janet waits outside their home and she hears Mrs. Rosenbach say to her son, "Oh Solly, it used to be cats and dogs." That gentle, motherly reproof tells the reader a lot about Solomon and his mother; and is in fact, something which haunts Janet later.

The Rosenbach's elderly housekeeper, Malka, is most loved by the family but can no longer do heavy housework. Although Janet is Catholic and Solly's parents are concerned she might "have anti-semitism" (despite the fact that Janet has no idea what the word means but is willing to learn it if that would make her a more desirable worker) she is hired to help Malka. Mrs. Rosenbach warns her that she'll need to be tactful so Malka (who Janet initially thinks of as a "black fly of a woman") doesn't feel old and unwanted; Janet admits that tactfulness might not be one of her strengths.

Alas, this is true. Janet's lack of tact (sprinkled with a healthy dose of hired girl eavesdropping) gets her into trouble.

She finds an ardent supporter in Mr. Rosenbach to whom she pleads, "I want to better myself." He admires her drive and supports her by giving her access to his library. "Edifying" books "take her into another world" where she imagines seeing the cities, monuments, and architecture pictured in The Picturesque World.

Janet battles with the fact that she is seen only as the hired girl and her own desire to be more than that. Recounting a scene where she attempts to intercept Solly so she can thank him for rescuing her she says, "I tried to express my gratitude in elegant phrases so he would see that even though I am a hired girl, I am not just a hired girl." She adds, "I could tell he wanted me to stop talking." Later in the book she observes, "I don't think of myself as a hired girl. After all, I'm not going to be a servant all my life. I plan to be a teacher someday."

I loved Janet's evaluation of her world: "The best thing about my servitude is that people are pleased with me...So different than life on the farm where no one was pleased and things never stayed clean."

And I appreciated her observations of the people around her. This is her description of Mimi, the Rosenbach's youngest daughter:

How can that child look pretty when she is not? It's partly the way she moves, I guess. She's so light on her feet. She's like a bit of bright paper being blown over the grass. I wish I were like that.

As a young Catholic who has never met a Jew ("except for Rebecca in Ivanhoe," as she tells the Rosenbachs), she is introduced to the world of a different religion. Since I am a Jewish Christian, I thought readers would get an interesting window into a religious Jewish household--complete with a young Catholic's perspective on the High Holidays, keeping kosher, and yiddish idioms (shiksa, anyone?). Although I am not Catholic, it appears that Schlitz did her homework in portraying that part of Janet's background and practices accurately.


I could go on and tell you about how Janet's love for romance leads to her "eternal embarrassment" and "mortification" or how the reader glimpses the fulfillment of Janet's desire to become an educated woman. But, I don't want to spoil the book for you. Let me just say that despite Malka's grim and at times sullen exterior, she is the secondary character whose love for Janet brings me to tears, even now as I write this review.

Homeschool educators and teachers would find this an interesting book for studying the time period, comparative religions, as well as for analyzing the author's world view.

This audio book is performed by talented Rachel Botchan who does an outstanding job with all the different characters. Even though I was tempted to keep this book and listen to it again, I'm going to give it away courtesy of Recorded Books  (valued at $88.00) to one fortunate blog reader. I will pick a winner on Friday, April 1. I will enter your name for each time you share this on social media, and an additional time if you become a new follower. MAKE SURE you leave me your email address if you are new to my blog and tell me what you have done.
at March 28, 2016

Count me in too. This sounds like a great read!

Thanks, Sandra. You're in!

Thanks, Connie. You're in three times also!

I can't wait to repost! Sounds like a remarkable read! Thanks, for giving us such fun reviews! Love to read your blog!

Dear Carol, what a great story. Thanks for sharing it.

Thanks Deb, Sheri, and Joan. You're all in!

I really enjoyed the video interview. And your review makes me want the book. I shared on Facebook and Twitter. Does that buy me a few entries?

Thanks for sharing, Mary. What is your contact info if you win? Put your name in three times!

Gretchen, you're in twice and Joyce you earned 3 times!

I am really looking forward to finding time to read this book. Please let someone else win. I'm not an audio person. Thanks for the post.

It's worth the time, Rosi. You would love it!

The Hired Girl is on my list of must reads. I've enjoyed our many discussions about the book. Unfortunately, audio isn't my forte. :-)

Yeah, Kathleen! You posted this comment in time to be entered in the giveaway. You'll LOVE this book!