SCAR: A Review and an ARC Giveaway

Congratulations to Linda Phillips who won THE HIRED GIRL audio CD. For those of you who know that Linda and I are best writing buddies, I can assure you that this was not rigged and the winner was chosen through random.org!

Sixteen-year-old Noah Daniels is a patriot with a problem. Lame since childhood, Noah wants nothing more than to take arms up against the British as his father did. But his childhood injury holds him back--both mentally and physically--until the day in which all of his abilities are tested and proved.

SCAR: A Revolutionary Tale (Calkins Creek, 2016), J. Albert Mann's first young adult historical novel, is short but powerful. Spanning the course of just three days, Mann artfully alternates between Noah's present predicament--he is wounded and is caring for a young wounded Indian--and the events leading up to it. 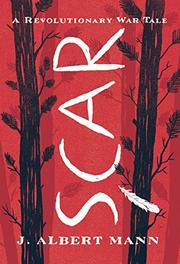 The reader is immediately drawn into the story in the first lines:


Their screams blind me. I run. Fast. So fast that I run right through my limp. There is nothing I can do for them now--not for Dr. Tusten, nor for Mr. Jones or Jon Haskell, not for any of them. Even as I dodge a blur of trees and rocks and branches, the scene under the ledge replays in my mind, Dr. Tusten shouting at me to run, that hatchet...

My lame foot catches a rock and I meet the ground. Hard. The musket ball in my stomach shoots searing pain straight up into my teeth.

This can't be happening.

I dig my forehead into the hemlock needles and suck in the familiar smell of soil--I wish I could go back three days in my life, just three days... (p.7).

Even though the reader doesn't know the protagonist's name, there are enough clues in these opening paragraphs to set up the story and provoke questions: "Why is this boy running? What happened three days ago?" And even more importantly, "What's going to happen next?"

Through the use of alternating chapters (present story and events that happened three days prior) the reader slowly understands the backstory: Noah's father's patriotic fervor before he died; his mother's reluctance to let Noah become a part of the Continental Army; Noah's self-assessment as a "crippled farm boy;" Noah's longing to have his own farm; his infatuation with the new girl in the settlement, Eliza Little; and his fear and hatred of the Iroquois Indians who recently joined forces with the British.

After he is wounded, Noah stumbles upon a young injured warrior:


The brightness of the stars has always seemed cold to me. I frown and look back at the boy who has become my patient. The white light of the moon catches on the shiny scar running down his cheek....Scar. I will think of him as Scar.

Faced with the choice of helping him or abandoning him, Noah uses his newly-acquired "medical" training to try and help him.


Without thinking, I pick up his hand in mind and look up at the sky between the branches of the hemlock trees. Why is it that when we want answers we know we can't have, we turn our faces to the sky? Maybe it's all those stars. Maybe just comparing our concerns to their twinkling masses shrinks our problems.

I'm afraid to look at him. I know that he knows he's dying.

He squeezes my hand again.

Earlier in the story, Noah faced another choice: Was he going to join the men going to battle, or would he use his lame foot as an excuse not to go? Despite knowing that his mother would want him to stay, he remembers her admonition: "Don't let others shoulder a responsibility that is yours." (p. 82)

Later when Dr. Tusten, who has observed his lame foot, questions his decision to join the militia, Noah responds:


If I were to ask these men sweating in the hot sun right now, each of them would own a good reason to stay behind, just as you believe I do." I wave over at Mr. Jacobson. "That men has six children to feed. And the Reverend has a portion of his flock to put to rest after yesterday. And Jon Haskell's wife is sick with fever." There is no shortage of pain and suffering in the lives of poor farmers, and I could have gone on, but instead I turn back to him. "And you, sir, you're standing before me, even though I'm sure that you must have a wife and children to think about. I will follow this militia, Dr. Tusten, whether you agree with my decision or not." (p. 93)

The book ends on an ambiguous note. In an email exchange Jennifer Mann said, "Every reader brings their own ideas to that end." You'll have to read SCAR, which launches tomorrow, to find out for yourself. An Epilogue and "About the Characters" provide more information about the battle and the combatants on both sides.

Since I'm always interested in how authors get their ideas (particularly when it comes to historical fiction!) I asked Jennifer how she became interested in the Battle of Minisink Ford. She responded:

On a weekend hike behind a friend’s home in the Upper Delaware River Valley of New York, I came upon an old wooden marker stating some small fact about a battle I’d never heard of. The second marker I came upon kind of changed my life. It was a simple wooden plaque drilled into the side of a rock ledge. It read:
Hospital Rock. Here on July 22, 1779, Lt. Col. Benjamin Tusten, a physician, and seventeen wounded militiamen under his care were trapped and killed by Joseph Brant's raiders.

A simple walk in the woods had brought me to a place where eighteen men had died. I started running up and down the trails looking for more markers. The markers told the story of The Battle of Minisink Ford, an obscure Revolutionary War battle. I didn’t know it then (or maybe I did), but I was to walk that trail literally and figuratively for many years to come as I undertook the challenge of writing my first novel of historical fiction. Standing there in the woods that day, I felt a deep need to discover who those eighteen men were and why they had died on a summer day in the shadow of a lonely rock ledge. In the end, I did find out “who” they were, but not “why” they died. That question never gets answered.

To be entered in the drawing for this ARC, leave me a comment by Friday, April 8. If I don't have your contact information, PLEASE include that also. This book would be a great classroom resource for grades 4-7 or as an addition to a home or school library.

This review originally appeared on LitChat.

Your review of SCAR makes me want to run right out and purchase it, but I'll wait to see who gets the ARC.

Thanks Sandra and Deb. Starting the giveaway list with your names!

The first lines in the book grabbed my attention and my imagination took flight. I want to know what happens .... Now.

Thanks, Sherrie, for becoming a new follower of my blog and for posting this comment. You're in twice! (FB counts!)

Well done! You do such a great book review. I don't know how you get so much reading done. You are so disciplined. I will keep my name out of the drawing this time, although I feel sure it's a good read. Thanks for sharing with us.

That opening page is just gripping. And I do love the gentle back and forth of this story. Don't enter me in the contest as I have a copy and will be hosting Jenn at my blog soon!

Thanks, Linda and Joyce, for leaving comments even if you don't want to be in the giveaway. Leaving room for other folks!

Congratulations to Jennifer Mann! The story sounds exciting and I love that it's set in my area. An ARC of Scar is already on my stack of books to read, Carol, so please don't include me in the drawing.

Such an interesting story of how Jennifer learned about the battle on a hike. I love hearing about where writers get their ideas from.

Thanks, Caroline. Will add your name to the giveaway list!

Thanks, Elena. Unfortunately I picked the winner yesterday. I hope you'll check this title out!