Fuzzy: A Review, A Mini-Lesson on Sidekicks, and an Audio CD Giveaway!

Congratulations to Joyce Hostetter who won LOVING vs. VIRGINIA from last week's blog.

This week's blog post comes courtesy of Recorded Books (who provided FUZZY) and Elizabeth Sims, contributing editor to Writer's Digest, whose article, "Stepping Up Your Sidekicks"  in the February, 2017 issue, prompted the template for this review.

Tom Angleberger, best known as the author of the popular Origami Yoda series, co-wrote FUZZY, a clever middle grade book with Paul Dellinger. The premise is guaranteed to attract both boy and girl readers: What happens when an experiment to create a robot that mimics a middle school student is so successful that the robot actually begins to think and act like a middle schooler?

Chaos. Trouble. Fun. And a slew of interesting dilemmas for the scientists behind the Robot Integration Project. 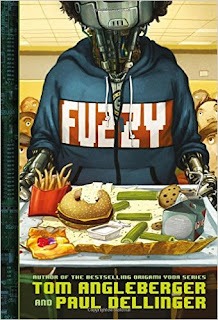 The protagonist, Maxine Zelaster (aka Max) is a smart, seventh grader struggling against a school increasingly dominated by vice-principal BARBARA--the computer who runs Vanguard One's Middle School. She is so determined to have an excellent school that her rules end up being burdensome and ridiculous. When Max demonstrates initiative or out-of-the-box thinking, BARBARA punishes her by lowering her test scores. Max gets into trouble with her parents and the threat of being sent to a disciplinary school looms over her. Fortunately for Max, she is also Fuzzy's mentor-friend.

Although misunderstandings with Max's parents and conflicts with the school's administration is an interesting plot, the real focus of the book is Fuzzy, the robot. He is named this because he is learning to think how humans do--which can be fuzzy at times, not totally logical or linear.


Sidekicks fulfill several functions heroes can't, and they make us love them while they do it. A good sidekick can provide support for the protagonist--or inadvertently screw things up for her. He can pivot the plot in sudden, unexpected directions, or bring a fresh set of eyes to a problem...Without sidekicks, many heroes would be mere shadows of themselves. (p. 58)

Fuzzy does all of this for Max from encouraging her to cheat on a test (which totally goes against Max's grain and gets her into trouble) to breaking into BARBARA's office and trying to, I'll put this nicely, re-program the vice-principal.

According to Sims, there are seven kinds of sidekicks:

Their primary purpose is simple: to show that at least one person feels the hero is worthy enough to deserve a steadfast friend. They act as messengers, deflect unwanted attention from the hero, or come to the hero's rescue. [Fuzzy decides it is his duty to figure out why Max's test scores are plummeting and to do something about it. Which leads to the afore-mentioned altercation with BARBARA.] Ultimately, however, a true loyalist must be willing to sacrifice his life--literally or metaphorically--for the protagonist. (p. 60)

Which Fuzzy does. But since this is science fiction, Max doesn't get thrown out of school, Fuzzy gets a second life, and all's well that ends well.

Sims suggests that in order for writers to create unforgettable sidekicks they should "possess some or all of the following attributes." Let's see how Fuzzy measures up.


Erin Moon, the narrator, did an excellent job of portraying the different characters. Even though I finished listening to this book a month ago, I can still hear Fuzzy's voice in my head!


Not only could a middle school teacher ask her students about the role of the sidekick, this book could generate great classroom discussion:

Sims provides great reasons to have a sidekick in a novel. In your comment, let me know if you have a sidekick in your book. What role does he or she serve? If you're not a writer, who is your favorite sidekick in literature? This giveaway ends on March 3. As before, if you are an educator, new follower to my blog, or share this on social media let me know and I'll put your name in twice. If you are new to my blog, make sure you leave your email address.
at February 27, 2017

Thanks, Carol. I didn't know much of anything about sidekicks until this post!! And this book sounds intriguing.

Thanks, Linda. I'll start the list with your name!

Thanks, Joan. Your and your grandkids would love this book!

This is a great post! This book sounds very interesting. I do have two side-kicks in my novel...but this post has got me thinking that I may underutilizing them and that I need to shake things up a bit. Right now, they would be considered as the gang. I must say that my favorite side-kick is Sam Wise from the Lord of the Rings. I think everyone should have a friend as loyal as Sam.

I'm an educator and this is my first time posting on your blog! Glad I dropped by!

I do have a sidekick in my book, and I am going to have to get this article and read it. I let my subscription lapse. My bad. I feel pretty good about my sidekick after reading this, but I'm sure I could learn more. Thanks for this post. My granddaughter has become much more of a read when an audio book is available. I'd like to be in the drawing for this. Thanks for the chance to win.

Thanks for the mini workshop on sidekicks. They are fun characters to write and can often add levity to the story and offer relief from a the protagonist's angst. Thanks for sharing. Not necessary to put my name in for the giveaway. I'm currently behind on my reading stack.

Thanks Clara, Rosi, and Kesha for your comments. This would be perfect for your granddaughter, Rosi, and for your kids Kesha. Kesha, you're in twice!

Thanks for sharing my tips, Carol! Glad they resonated with you and your followers.

What timing! I just got off the phone, talking with the co-writer of my next WIP about, among other things, the sidekick! This gives us a great checklist. Thank you!

Glad it was useful to you, Rebecca!

FUZZY sounds like SO much fun! The checklist is great, too--made me pause a moment to think about what kind of sidekick I'd be (and not). Thanks so much, Carol -- again! --for the craft lesson and giveaway contest.

Interesting post about sidekicks, Carol. It makes me want to look at my own writing to strengthen the purpose of the sidekick character I'm introducing. Hmmm.

Thanks, Gretchen and I'm glad the post stimulated some thought. Unfortunately, I already picked a winner. But stay tuned--another great giveaway next week!