Making Friends with Billy Wong by Augusta Scattergood: A Review with Help from David Corbett

Congratulations to my fellow blogger, Clara Gillow Clark, who won a copy of TWICE BETRAYED on last week's blog. Stay tuned friends, I have lots more giveaways coming up!

One of the writing blogs I follow is Writer Unboxed. When I find an article by one of their contributors in Writer's Digest, I pay extra attention.

Soon after completing Augusta Scattergood's middle grade novel, MAKING FRIENDS WITH BILLY WONG (Scholastic Press, 2016),  I read David Corbett's article "To Change or Not to Change?"(Writer's Digest, January, 2017). Thanks to Corbett, I found a terrific template to review Augusta's book. (Quotes from his article are in bold.) 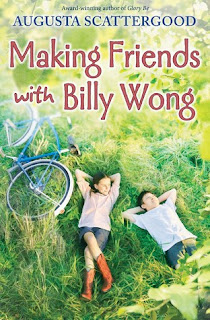 Every story implicitly asks two simple questions: 1) What happened? and 2) Why? These questions may remain unanswered, but they cannot be escaped...we need to keep in mind what Les Edgerton means when he says every story is about the same thing--trouble--or what Steven James means when he says that stories are not about what happened, they're about what went wrong. (Writer's Digest, pp. 26, 27)

For Azalea Morgan, the protagonist in MAKING FRIENDS, her life goes wrong in the first paragraph:

All it took to send my summer on the road to ruin was a fancy note and a three-cent stamp. The minute that envelope showed up, Mama was packing my suitcase. (p. 1)

The reader quickly discovers the three types of problems which Corbett says characters try to answer:
For Azalea, that means surviving a summer in Arkansas without her best friend and being asked to help a cranky grandmother she doesn't really know.
Azalea doesn't make friends easily and when she finds out her grandmother expects her to be friends with Billy Wong, the local grocer's grand nephew, Azalea thinks,


Like it or not, I was going to meet more people than I was ever friends with back in Texas. (p. 26)


Would this Billy Wong boy want to talk to me? Did we speak the same language? I wasn't so great at talking to ordinary boys back home--boys who didn't look like they'd just arrived from some faraway country. Mama says I'll get over that talking-to-boys thing. I doubt I'll get over it this summer in Paris Junction, Arkansas. (p. 29)

In spite of her doubts about being friends with a Chinese boy, Azalea begins to see the ostracism Billy faces. That, along with his friendliness, draws the two together. After they get ice cream at the drug store, Billy asks her if she wants to bike at the creek or hunt turtles.


If I hadn't already talked more than I'd talked in my entire lifetime to a boy, I'd be explaining that no, I will not be exploring a creek. I will be fixing dinner and watering Grandma Clark's garden till the cows come home....Even though it was easy eating ice cream together, I had a hard time picturing being good friends with a boy. Especially one so different.


When a protagonist of any kind changes, it's usually because the struggles and conflicts he has faced have forged a different understanding of himself, his abilities and/or his world, including the people in it. (p. 28)

By the mid-point of the book, Azalea is calling Billy her friend. She is also surprising herself by becoming braver than she ever had been in Texas. She discovers hidden truths about Willis, the town bully, as well as about her grandmother. These discoveries spawn new actions.

Despite her fears, towards the end of the book Azalea climbs up her grandmother's tree behind Willis, who has been throwing acorns down on her and Billy. She asks:

"This was my tree till that Chinese boy came. Now every time I climb it, he's around."

When a breeze rustled the tree's leaves, I grabbed hold of a thicker branch and held on. "Ever think about being friends with Billy?" I asked, still not quite believing I was perched in a tree with Willis DeLoach. (p. 173)


With that interaction, the reader knows that Azalea is well on the way to growing and changing.

Like Kirby Larson's LIBERTY, Augusta Scattergood inserted poems from Billy's point of view. Her sparse use of language gets to the heart of how Billy is feeling. This is one of my favorites:

"Need me some garden fertilizer," he snarls.
"Near the fishing lines," I answer, nicely.
He draws his words out.
"Bologna? Cheese? Bread?"
"Right this way, sir," I say.

I reach into the cool case of cheese and lunch meat.
Weigh a thick wedge of cheddar.
Punch the cash register's round buttons.
Hand the man groceries.
Watch him leave.


Look to your story to determine whether your main characters must change, and the degree of change they will undergo. Change is by no means a requirement--but when the story leads to self-examination, or revolves around a relationship, it is all but inevitable that the action will create the re-evaluation of self that we equate with change. (p.29)

******
Teachers and home school educators: Augusta just posted her classroom discussion guide on her website. You can download it here.

Thanks, Linda. You and Anna need to read this book!

Great post, Carol, with wonderful reminders for writers. I met Augusta at a workshop a few years ago. Tell her Hi for me and congratulate her on this timely book.

I'll make sure Augusta sees your comment, Kathy. Thanks for stopping by. Yes, this is a timely book!

Dear Carol,
What great questions to ask and answer when we write, Thas fr sharing.

Sounds like a terrific book, Augusta. Loved your post, Carol. It's great that you two got to spend such quality time together!

I giggled while reading the excerpts. That's a definite plus. Also loved those opening lines. And I do appreciate the analysis as I am in the middle of revisions that benefit from the question about what went wrong!

Thanks Carol and Augusta. Ya'll look good together!

Thanks, Joyce, LInda, and Joan. It was certainly fun meeting Augusta and glad this review has prompted your thoughts!

Thrilled that I won the ARC of TWICE BETRAYED!!! YAY!!! This was a great post, Carol. So fun that you and Augusta were able to meet.

I especially loved that line from the Writers Digest article, "Stories are about what went wrong." An altogether fabulous and substantive post.

Thanks, Clara. That's a great line for all of us writers to keep in mind. "substantive post." That is going to stick with me today. Glad to be in that category!

Terrific, rich post. Thanks from the writer in me. Very informative. I haven't read Making Friends with Billy Wong yet. I need to get to it. I loved Augusta's first book, Glory Be.

Thank you, Rosi. We have so much to learn as writers...it's always good to take "refresher" courses by studying other books. Glad you found this useful. I know you have a long list of TBR books. Hope you add BILLY WONG to it!

Thanks, Kristina. I hope you come back next week when I'll have another review with comments about the writer's craft. It's my new thing!

For some reason, this post really spoke to me as I am sitting here about to continue working on my MG Historical Fiction. The lessons from the WD article are nothing new but said the way you've interpreted them and with your excellent examples from Scattergood's book, they jumped out at me and screamed, "pay attention. You need this!"

Sometimes we as writers need to be reminded of what we already know. Thank you for an excellent post and for sharing another excellent book.

I agree, Sandra. I need to hear this type of advice over and over again!

Reading these comments was like having a chat with old friends!
Thank you for this post, Carol, and for everybody stopping by to say hello.

You're welcome, Augusta. My pleasure to share your book with my readers!