I'm honored to share a cover reveal for a tween book that will be released next month. TWICE BETRAYED, by my fellow Highlights Summer Camp participant, Gayle Krause, will be available on March 28th from Trowbridge Books.

Isn't this a gorgeous cover? 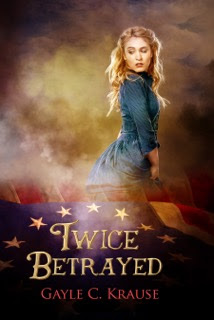 Here's the blurb for the book:

The thread of friendship is stretched to the breaking point…

With the spark of independence crackling in Colonial Philadelphia,
Perdy Rogers chafes under the strict rule of her Quaker grandmother and the endless duties of her apprenticeship in Betsy Ross’s upholstery shop. So when her best friend shares a secret and invites Perdy to help plan an elopement, she’s thrilled to be with her friends again. But Perdy has no idea that one favor will unravel the stable fabric of her life and involve her in a tangled web of deceit, lies and treachery.

Disguised as boys, three girls head to the river to put Perdy’s plan into action, but only two return. When the third, a young milliner’s assistant, is found drowned with gold coins sewn into her hems, coded spy letters in her bodice, and a journal implicating another sewing apprentice as her co-conspirator, all eyes turn to Perdy Rogers. But she’s no spy!

Accused of treason, she struggles to prove her innocence with the help of a handsome stranger and learns the hard way that freedom, whether an individual’s or a country’s, comes at a cost.

*********
Gayle shares some of the backstory behind TWICE BETRAYED:

I’ve always loved history and discovering how things came to be. In the Caribbean, the long-lost pirates whispered to me with each crash of the waves. I’m working on a female pirate story. When I walked in Pompeii, I felt like I had been there before. In the Coliseum, a new story blossomed, about one of the entertainers. I’ve yet to write that one!

But Perdy’s story was different. I wrote it first, and when I visited the Betsy Ross House, after the story was completed, I froze in my tracks and my husband asked me what was wrong.

But nothing was wrong…it was right. I had described the shop, the kitchen, the bedroom Perdy shared with her sister and grandmother in great detail, with the only difference between TWICE BETRAYED and the real thing being the shape of the stairs. And since the whole story about Betsy Ross making the first flag is a legend, with no real proof that she actually did make it (you can ask any historian) it was a perfect setting for my story.

I come from a long line of seamstresses and am a certified Home Economics teacher so you can see how the sewing bits in the story are relevant.
*********

TWICE BETRAYED is a mix of fact and fiction stitched together to bring a new light to the fabric of our beginnings, told from the eyes of a thirteen-year-old girl, who fell into a web of deceit and struggled to win her freedom.

Gayle is giving away an autographed ARC to one fortunate winner. Please leave your name and email address (if you are new to my blog.) Random.org and I will pick a winner on February 4. If you share this on social media, let me know what you do and I'll enter your name twice. 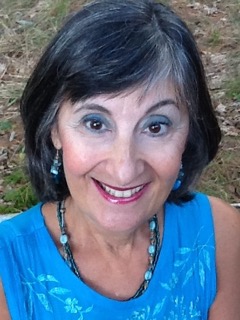 Gayle Krause was born in Scranton, Pennsylvania where she led the younger kids in creative dramatics, wilderness expeditions, and fossil hunting. Those early interactions led her to a career in teaching, where, as a Master teacher she continued to inspire teens as she prepared prospective Elementary Teachers and Early Childhood Educators at the secondary and post-secondary levels. Simultaneously, she directed an instructional Laboratory Pre-K for her students, where she worked with eager young preschoolers.

WoW! This plot looks very very interesting and the cover is stunning!

Sounds intriguing! I know I've won enough recently, so no need to enter me here, but I'll look forward to reading this one at some point.

Dear Carol,
Oh my goodness! What a story! I really admire Gayle Krause and her book sounds delightful!

Wow! Beautiful cover! This sounds like the story was "tailor" made for you, Gayle. Quite intriguing.

Here are my name and email address for the ARC drawing. The story sounds wonderful.

Thanks Jillian, Joan, LInda, and Robin for leaving comments. You're all in --except LInda who has graciously admitted to winning many books recently!

Thanks, Nancy. Received both your comments and appreciate you leaving your email address too

Thank you, Linda. Glad you think it sounds intriguing. :)

Thank you, Joan. Hope you will read it. Thank you for your comment. :)

Thanks for your "tailoring" comment, Jilanne. It had me in stitches. :) Hope you will add Twice Betrayed to your reading list. :)

Thank you, Carol, for helping me reveal the cover of TWICE BETRAYED. I appreciate it. :)

Congratulations to Gayle on her beautiful new book! What a stunning cover.

Oh, my. I am trying not to try to get more books, but I cannot resist the chance for this one. It sounds so good and it's MG historical fiction, my favorite genre. I want to read this book!!! Thanks for telling me about it and for a chance to win.

Thanks Clara and Rosi. That's quite a compliment to Gayle coming from you, Rosi. I know you have a LONG TBR list! But both your names are on this giveaway list.

Carol, Just getting to your wonderful blog. Thanks for sharing this delightful novel. The covers a grabber and a has a great synopsis. I will also add to my TBR list.

Thanks, Sheri. Your name just went into the hat!

Thank you, Rosi! I'm happy you want to read Perdy's story. I'm sure you'll enjoy it.

Hi Sheri, So glad you love the cover as much as I do. And the story is not bad, either. :) Hope you enjoy it!

Glad you saw all these lovely comments, Gayle!

This book would be perfect for my fifth graders!

I agree Theresa. YOu're in!

This looks like an interesting book. Of course, I would read it prior to passing it on to our teenaged granddaughter.

Thanks for posting this, Carol. Sounds like a terrific book. I can't wait to get my hands on it.

Thanks, Mary! Unfortunately, I picked the winner yesterday. But I hope you put Twice Betrayed on your TbR list and come back again. Lots more giveaways coming up!

Carol, thank you for sharing this! The cover art for TWICE BETRAYED is beautiful and so perfect for the tone of the story! I love mysteries and historical fiction so this is definitely on my TBR list. Congratulations Gayle and I love hearing how the setting you wrote so closely matched the real setting-gives me goosebumps :)

Thanks, Kathleen. Appreciate you stopping by!

Hope both you and your fifth graders enjoy it. I can easily see it as an addition to the American History curriculum. :) Thanks.

I would encourage you to read it and I believe both you and your granddaughter will love it.All of the middle school beta readers, who have read it, do. :) Thanks for stopping by.

Thanks for your support, Mary. Hope you enjoy Perdy's story. :)

Thank you, Kathleen. It was very eerie the way the setting was so close to the real thing. Almost makes me think the Widow Lithgow's granddaughter was channeling me to tell her story. Who knows? Maybe she really did design the first flag! :)