Fire, Color, One: An Audio Book Giveaway, Review, A Look at Flashbacks, PLUS Story Innovation

FIRE, COLOR, ONE by Jenny Valentine is about as different from FUZZY, the book I reviewed last week, as you can get. Jenny Valentine's edgy young adult novel is a serious portrayal of Iris, a young woman caught up in the addiction of pyromania. With some language and an attempted rape scene, it might not be the book for every teen reader. But, it's also a story of healing, friendship, art, and found family. 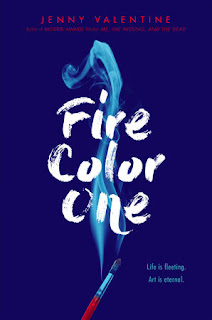 Plus, it's a story masterfully told through many flashbacks. (Disclaimer: since I listened to the audio book provided by Tantor Media, some of the quotes might not be as exact as if I had read the print version.)

That line from the book's prologue summarizes Iris's heartache and grief. Like a pretzel without beginning or end, this prologue is actually the end. From the beginning of the story, the reader knows Ernest, Iris's father, dies from cancer. What we don't know, is how she "lost" him.

As the story moves forward. the reader discovers that Iris, her selfish mother (Hannah) and egotistical step-father (Lowell) have returned to England. You don't know where they came from or why Iris is unhappy until Iris reflects on the fact that,

The reader discovers more backstory as Iris looks around her new sterile room and misses the California landscape, the posters on her walls, and Thurston standing at her window waiting for what they're going to do that day.

Valentine's masterful use of simple flashbacks layer in vital backstory but keep the story moving forward. As a reader/listener I was never bogged down in the past. Rather, these flashbacks always informed what was happening in the present.

In this way, the reader learns how and why Iris began to set fires. She says, "Some days inside my head there is nothing but fire." Imagining herself setting a fire relaxes her and provides an adrenaline thrill of excitement and a rush of release. Iris is not an arsonist; she doesn't want to harm anyone or anything. But she is an angry, hurt young woman.

Upon his request, Hannah brings Iris to her father's deathbed. Iris does not want to be near the man she believes abandoned her as a baby, but eventually bonds with him over art, music, and literature. As Iris watches her father draw near to death, she hears his story, her mother's story, and finally, the truth of her own story. Valentine fits these puzzle pieces together through one flashback after another.

Towards the end, as Iris stands outside her father's bedroom door, she hears her mother talk about how dangerous she is as an arsonist. Iris has moved from not caring about her father, to being worried about what he'll think of her. "I knew there was nothing I could say or do to save myself."  As she listens to her mother's betrayal, it's excruciating for the reader who knows that inevitably, Iris will start another fire looking for the calm, peaceful, emptiness it gives her.  When her mother came to find her, "The next morning my fire was still smoldering. I was still angry. So is she."

Valentine does an excellent job portraying Iris's troubled relationships with Hannah and Lowell. They are wannabe actors and their pitiful attempts at pretending to be people who they aren't is in juxtaposition with Iris's real emotional struggles and Ernest's serious physical struggles. Valentine's portrayal of Iris's grief after her father dies was authentic; it reminded me of how I felt when I lost a loved one forty years ago.

When the reader gets to the end (which remember, is the beginning) Ernest gives Iris a huge surprise--after his death. Even within this last twist, flashbacks are folded into one another.

Coincidentally, at the same time that I listened to FIRE, COLOR, ONE in my car, I listened to THE HOUSE GIRL by Tara Conklin on my phone. (Well, not exactly at the same time, but you get the idea.) Although this a totally different book (adult fiction with two POV: Lina is a white, modern lawyer; Josephine is a black runaway slave in Virginia before the Civil War) from FIRE, there have a lot in common. Both center on art and involve mothers who abandon their children in one form or another. There is a similar close POV (in FIRE it is first, in THE HOUSE GIRL it's a tight third) with well-chosen details showing the characters, their nonverbal language, and vivid settings. Like FIRE, THE HOUSE GIRL heavily uses backstory to propel the story forward. Much of this backstory comes from documents that Lina uncovers as she searches for a plaintiff in a civil rights reparations case.

Conklin is as masterful as Valentine in weaving a story together. Both authors do not present books with a linear plot path of Beginning-Middle-End. The books reminded me of this recent article on Writer Unboxed in which Heather Webb wrote,

Story—and innovation—is king. To keep readers coming back to the blessed book, it’s imperative to stand out in all the noise. Maybe this is why writers are experimenting with stylistic changes. Readers are demanding something sensational that really grips them, and even changes their view of the world. Writers can’t sit back on their laurels. They must STRIKE OUT and be unique, as well as create a story that’s universal. (You know, because that’s so easy.)

There you have it. Two books which demonstrate exactly what Heather Webb described.

THE NARRATOR and THE GIVEAWAY

Gemma Dawson, FIRE, COLOR, ONE's narrator, does an excellent job of bringing the characters to life. I'm always impressed when a narrator does both male and female voices and flips between different accents without a hitch. It was interesting that Iris spoke as if she was British, although she spent most of her life in the United States. Perhaps it was because she ended up coming home to her British father.

I am offering my copy of FIRE, COLOR, ONE to one of you. Please leave me a comment by March 11 with your email address if you are new to my blog. As always, if you share on social media, I'll enter your name in twice.

Carol, this is certainly a story that I don't often read. Thanks for your review. I shared on Twitter.
Connie
cps1950(at)gmail(dot)com

This sounds like a great read and a great opportunity to learn more about flashing back, which I definitely need to do. Thanks, Carol!

Thanks, Linda and Connie. you're in twice,Connie. Thanks for sharing.

What an insightful review, Carol. You've made me want to read the book. Shared on Twitter.

Thanks, Clara. You're in twice!

Carol, you're amazing! Two great reviews and a giveaway too. I'll put this on Facebook. Maybe you'll get a new follower.

Thanks, LInda. Both books are worth reading. Your name is in twice!

Thanks for making me aware of this book. Sounds intriguing.

Thanks for the reader's alert - sounds worthwhile.

Thank you, LInda. I hope you check this book out.

Thanks Carol for sharing about Fire, Color, One an audio book!
You are always so good at finding intriguing books and writing ideas to share with us.

Thanks, Joan. Sorry, but the giveaway is over! Others soon

Dear Carol,
That's okay. I just wanted you to know that I liked your post.

thanks, that's thoughtful of you, Joan.