Midnight Without a Moon: A Review, ARC Giveaway, and Focus on "The Emotional Craft of Fiction"

This blog post is courtesy of Augusta Scattergood who gave me a copy of Linda Williams Jackson's debut middle grade novel, MIDNIGHT WITHOUT A MOON (Houghton Mifflin, 2017) and Vijaya Bodach who recommended Donald Maass's book, The EMOTIONAL CRAFT of FICTION (Writer's Digest Books, 2016). 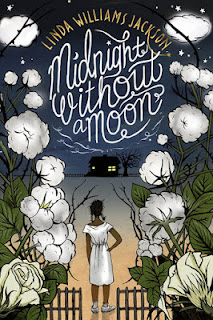 Since Half-Truths is on hold right now while I'm waiting for feedback from my readers, I started working through the outstanding writing exercises which Maass stuffed into his latest book. Since I love sharing craft resources with my blog readers, I picked a few selections to show you how Linda Jackson answered the question Maass poses to writers, "How can I get readers to go on emotional journeys of their own?" (p. 2)

In the first chapter Maass says, "Only when a situation has heavy emotional baggage will readers pick up the baggage and carry it (Maass, p.14). 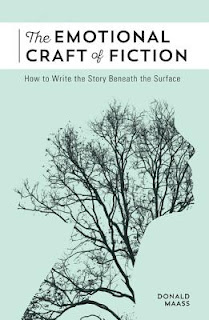 Let's look at thirteen-year-old Rose Lee Carter's life in Stillwater, Mississippi in 1955. In the opening chapter the reader relives the day Rose's mother left her with her maternal grandparents:

"What about me and Fred Lee? Ain't we yo babies?"

Mama giggled like a silly schoolgirl. "You and Fret'Lee big now, she said, waving her hand at me. "Callie and Christopher is the babies. Besides, y'all got Papa and Ma Pearl..."

"Nuh-uh," Mama said frowning, as she leaned toward her reflection. "Two babies is more'n enough for me to care for."

After making sure that she was a lovely as a spring morning, she bent down and placed her soft hands on my shoulders. Kissing my forehead, she said, "You be a good girl for Ma Pearl and Papa. Don't make Ma Pearl have to whup you."

That was the last thing she said to me before she became a mama to Sugar and Li' Man and a memory to me and Fred Lee. (pp. 12-13)

In Maas's second chapter, "The Emotional World," he says, "Creating a world that is emotionally involving for readers means raising questions and concerns about that world. It means both welcoming readers inside that world and making them curious, or uneasy, about where they are." (Maass, p. 29)

A difficult part of Rose's world is that her cousin, Queen, also lives with her grandparents.


....Plenty of folks in our family were yellow, but Queen was different. And with the way she never lifted a finger to even wash a plate, she acted like she was white, too.

Folks said that when Queen was born, Ma Pearl took to her like ants to a picnic. They said she snatched that newborn baby from Aunt Clara Jean's bosom and claimed her like a well-earned prize. That's because Ma Pearl favored pretty. And to Ma Pearl, light equaled pretty, even if the person was as ugly as a moose.

Folks said that when I first came out of Mama, my skin was as pink as a flower. Mama said she took one look at me and declared, "I'm go'n call you Rose, 'cause you so pretty like one." But Ma Pearl said, "Don't set your hopes high for that child, Anna Mae. Look at them ears. They as black as tar. By this time next year that lil' gal go'n be blacker than midnight without a moon, just like her daddy."


Rose longs for an education but Queen is allowed to attend school whereas Rose has to work in the cotton fields. Ma Pearl frequently criticizes Rose in comparison to Queen, thus making the reader uncomfortable.

Joyce Hostetter has taught me to always consider the wider world in which the character lives. Rose's world is filled with blacks who are murdered by whites. This passage follows Rose finding out from her friend Hallelujah that a mutual friend had been killed:


As I stumbled clumsily between the dusty rows of green cotton leaves, I could't help but resent them. Levi Jackson, a fine young man, had spent most of his life tending to this field, bringing that cotton to life every summer. Now he no longer had his.

I wanted to scream. I wanted to scream until my anguish was heard all over Stillwater--all over Mississippi--all the way to Chicago, straight to my mama's ears. I don't know why but I hated her at that moment. I hated her more than the nameless face that had shot Levi Jackson for no good reason.............I shouted into my palms. "Why, Hallelujah! Why?"

Rose's and Hallelujah's world also includes Emmett Till, who was hunted down and brutally murdered for whistling at a white woman. As these events sink into Rose, she is torn between desperately wanting to leave Mississippi and Hallelujah's comments:


"...if she [Rose's Aunt Belle] had been able to open a shop here, in a place where our people are shunned and oppressed, it would have made her feel even more accomplished than she already does."

"Stars shine brighter in the darkness," I said quietly.

Hallelujah crossed his arms over his chest and nodded. "Dreams have more meaning when you have to fight for them," he said. "That's why folks like my father choose to stay. They know they have a right to be here, and they're willing to do whatever ir takes to make those rights equal." (pp. 254-255)


When we are moved and inspired by the actions of characters, what we feel are higher emotions....

When reason prevails over impulse, when disgust is replaced by insight, when an act of generosity is underserved, when love is given where rejection seems certain, when someone sticks up for another, when help is unasked for, when apology is humbly made and forgiveness unexpectedly given, when doors are opened in welcome, when truths are spoken and the origins of conflict laid bare, such acts stir in readers the swelling of the chest and opening of the heart. (Maass, pp. 43-44)

Aunt Belle invites Rose to move to St. Louis with her and Rose struggles over her decision to leave Stillwater:

Levi stayed and he didn't live to see a week over the age of twenty-one. Would that happen to me? I didn't know--couldn't know--but I had to be strong enough to find out. I had to stay--not just for the sake of those I didn't want to leave behind, but for my own sake. I had to know if I could shine in the darkness.

Imagine how bright a star would shine at midnight without a moon! (p. 308)

**********
It was difficult selecting only a few passages from both books to quote here. I hope I've provided enough that you'll decide to read them yourself. To enter the giveaway for Midnight Without a Moon, please leave me a comment by March 25th with your email address if you are new to my blog. If you are an educator or a new follower, I'll enter your name twice.

Such powerful excerpts from both books! Thanks for the heads up about the Maas book.

Carol- I ordered that Maass book b/c of your recommendation! Looking forward to reading it. And I'm glad you shared MIDNIGHT WITHOUT A MOON. Obviously I don't need a copy (I had two and kept one for my collection.) Thanks for spreading the word about Linda's debut novel.

Powerful passages, perfectly matched to the lessons. Great job, Carol. Thanks for introducing us to MIDNIGHT WITHOUT A MOON, which seems to me a must-read. And oh, I do appreciate these writing tips!

Thank you for this opportunity! I am new to your blog and can't wait to dig in. I'm a school librarian and my email is Susan.sullivan@greececsd.org

Thanks Deborah, Melodye, Augusta, and Susan for visiting my blog. Susan--welcome! If you don't win this week, you'll find lots more books in the weeks coming up. You and Deborah are in twice.

Nice to hear from you, Miriam. You're in the giveaway also.

Great post! I definitely want to read Linda's book, and I need to get my hands on Maas' book too.

thanks Michelle, You're in twice! Neither book will disappoint you.

Wonderful choice of passages. I am chomping at the bit to read this one. Please let someone else win. I just won an audio book from you. I will put this one on my TBR list.

Thanks, Rosi. Hope you get a chance to read it!

Another wonderful post. The excerpts really show off the emotion of the story and I was pulled immediately to the conflicts. I have Donald Maas's book and have found it inspiring.
Thanks for sharing these books-

Thanks, Sheri. You're in too. Glad you have the Maass book. It's tremendous!

Thanks for sharing this, Carol. Beautifully written blog post and the passages are incredible. Don't let me forget that I want to read this book!

Dear Carol,
You and your grandchildren are delightful endorsements of literacy! Thank you for sharing. Thanks for sharing the passages from two books that pull us in emotionally.

Believe in you
Never Give Up
Joan

Thanks, JOan. The grandkid blog was fun to write and I was glad to recommend these books.

I've just had a chance to sit still long enough to catch up on your blog. I loved this blog post - I know what missing from my WIP is the emotional arc of my protagonist. I think I'll pick up the writer's digest book you referenced and read it from cover to cover and try to reinvent my protagonist.

So glad to hear this post was helpful, Kesha!