I don't typically blog twice in one week, but I couldn't wait to share some news with you. Remember when I posted about Angela Ackerman and Becca Puglisi's new Emotional Thesaurus two weeks ago?

A few days later I received this email from Angela: 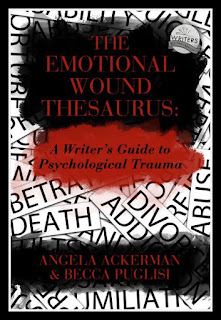 I am thrilled that you've won a Custom Description Thesaurus Entry from Becca and I for the Emotional Wound Thesaurus. So basically, you can pick any wound we haven't covered in our book or at One Stop for Writers, and we will write it for you. This is perfect if you have a character that you want to dig a bit deeper into.  Just follow the link to see which ones we have, and if there's one you would like us to explore for you, we will.

I immediately returned her email with backstory about Half-Truths and some ideas. The following week the equally amazing Becca Puglisi (honestly, I don't know if this pair ever sleeps!) posted this on One Stop for Writers. How cool is this?

NOTES:
Like all wounds, this one can have varying effects on the individual depending on the circumstances. In some cases, the person may discover something that isn't a bad thing (such as the truth about a racial or cultural heritage) but it rocks their world due to how it reshapes their identity. This could be especially challenging if they grew up being taught specific racist beliefs and now they must reconcile with this new information that places them within that same group. In other instances, they may discover something unethical or unconscionable in their family history that they'll have to come to grips with. Another factor to consider is how the character discovers the information. Was it deliberately kept from them or simply an unknown? Do they stumble upon it unexpectedly or was there suspicion in their minds all along? Do they discover it on their own or is it uncovered by someone who goes public with it, forcing the character to process the information before they're ready to do so? As always, examine the event from many different angles to ensure it has the proper impact.

FALSE BELIEFS THAT COULD BE EMBRACED:
I'm not the person I thought I was.
My entire life is a sham.
I don't belong anywhere.
If others find out about this, they'll reject me.
If this part of my life is a lie, then nothing is certain.
My blood makes me guilty by association (if notoriety is discovered in one's family roots).
If I reveal what I've learned to my family members, it will destroy us. So it's best to keep it secret.

THE CHARACTER MAY FEAR:
Losing their sense of identity; not knowing who they are
Being condemned because of their ancestors' actions or beliefs
The family being torn apart by the information
Being ostracized by the family if one shares what one has learned
That, genetically or ideologically, one will become like one's notorious ancestor(s)
That more identity-based falsehoods exist
Rejection by the family when they learn the truth about one's heritage

POSSIBLE RESPONSES AND RESULTS:
Sitting on the information until one can figure out what to do with it
Choosing to protect the secret rather than reveal it
Refusing to accept the truth; living in denial
Becoming conflicted when asked by family members to keep the information to oneself
Rebelling against one's heritage or culture as a way of separating oneself from it
Making excuses for a notorious ancestor's actions
Withdrawing from the family
Feeling confused about one's identity
Examining one's physical features or those of one's family members looking for signs of the hidden heritage
Pulling away from anyone clearly associated with a certain ancestry; preferring racial or cultural ambiguity
Questioning other valued parts of one's ancestry
Lashing out at anyone who knew about the secret
Harboring resentment against family members one believed should have known the truth
Shunning former passions or interests associated with one's family or heritage
Becoming apathetic; losing interest in one's hobbies or activities
Adopting the belief that there is no absolute truth
Becoming skeptical of everything
Falling into depression
Changes in appetite due to stress; rapid weight losses or gains
Difficulty sleeping
Avoiding the truth through drug or alcohol usage
Rejecting everything about one's heritage to distance oneself from the thing one can't come to grips with (throwing the baby out with the bathwater)
Thinking and acting prejudicially against people from one's former heritage or culture
Becoming obsessed with the notorious figure(s) from one's past
Seeking wise and impartial counsel to help one make sense of the situation
Attempting to make amends or restitution for any wrongdoings by one's ancestors
Studying one's true heritage to begin to understand it
Recognizing that one can be proud of one's heritage without accepting the actions or ideology of some of its past members
Empathizing with and reaching out to other people who share one's circumstance
Realizing that one's heritage is only one part of a person's identity

TRIGGERS THAT MIGHT AGGRAVATE THIS WOUND:
A festival, parade, or other celebration of the heritage one thought one belonged to
Learning about other lies—even those with good intentions—told by family members (about the severity of an aunt's illness, covering for an uncle's drunken binge, the existence of Santa Claus, etc.)
A reunion or holiday gathering where the family heritage will be honored
Hearing news stories about a regime or corporation covering up the truth
Seeing others struggling with important facets of their identities (i.e., cultural, sexual orientation, religious, etc.)

OPPORTUNITIES TO FACE OR OVERCOME THIS WOUND:
Seeing someone of the heritage whose people were oppressed by one's ancestors and wanting to help him or her
Being asked by one's child about their ancestry and having to decide what to tell them
Having a chance to right a wrong by telling one's story though it means making it known to the world
Uncovering a secret at work or in a trusted organization and having to decide what to do with the information.
Didn't Becca do an amazing job? Trust me, I'll be pouring over this entry and mining every nugget!  By the way, if you haven't checked out One Stop, here is my blog post giving you a window into how I use this comprehensive writing resource.
at November 08, 2017

I agree that Becca did an amazing job and I will be checking your blog. Can't wait to see how this shows up in your story!
Many blessings,
Connie

Thanks, Connie. That was my hope in sharing this!

Aw shucks, Carol :). I'm so glad you found the entry helpful. I thought it would be a challenge for people to come up with entries that we hadn't already covered, but you handled it like a champ :). I really hope it helps you flesh some things out for your story and your character.

So glad you'll be able to use this--I hope it helps you pull back the layers of your character's motivation and add depth to the story, Carol!

Thanks Becca, Angela, and Constance. Peeling away layers--great way to think of this process.

Wow. That is so cool. Congrats!

Simply amazing, Carol. I'm so happy for you. I'm sure you'll put it to good use.

Congrats, Carol! What a great gift from Becca and Angela, a truly dynamic duo. So much great stuff in this post to process.

Thanks Rosi, Linda, and Clara. It is a great gift!!

I knew you would like it, Julian! I hope you check out their rich thesauri resources!

I'm speechless! Wow! I need to get that books!

Wow! I agree with you and everyone else that she did an amazing job.

This is one book I need to get.

YEs, Sandra. Get this book. Better yet, get a subscription to One Stop. This is just one example of their amazing entries!

This is amazing. They are so talented. I will also be checking your story for these emotional characteristics.

Awesome and thensome, Carol, plus ditto to all of the above. I might could imagine half of these descriptors but could never turn them around overnight.

Thanks Sheri and Cat. They are an amazing team and I was fortunate to have them work on this for me!

Becca and Angela are amazing(I've been a fan since I first discovered them! This is so fantastic-thank you so much for sharing!