I recently hung out with three other writers for several days of writing, critiquing, eating chocolate and yummy food. (What is it about writers who must have the latter two to validate the first two?) Since each of us was at a different place in our manuscript, I thought it would be interesting to share a few of the stages writers go through when writing a novel.

I asked each writer to describe the present draft, how long she has been working on her novel, what the previous draft looked like, and what she was expecting to do next. I'm sharing two writers' stories this week and two next week. 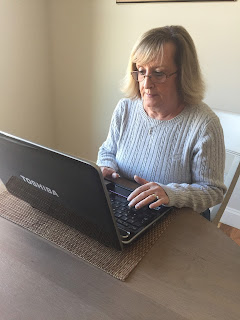 I would consider this to be my third draft. The first two drafts were different POV’s. I finally decided on John’s POV in the first person. It seems to be working better for the story.

I have been working on this book for about five years (off and on). My goal is to get John’s story about his pirating days out to the many adventurous readers out there.

I had two previous drafts that were just not working – the story was flat and the characters lacked motivation. When I switched to John’s first person POV, this breathed new life into an otherwise “blah” manuscript.

I continue to delve into John’s motivations and deepen his character. John and the runaway slave will set aside their differences later in the story.

Here is the pitch and a snippet from Barbara's book:

In "The Brotherhood of Pirates," young John King sets sail on a journey that will forever change his life. Set in 1716 and based on true events, when John's ship is attacked by pirates, he is compelled to run away with them and live the pirate's life.


What ten year old boy wants to travel with his mother? Not me. But what did it matter now? I am already sailing on the Bonetta with her and have been for several weeks. This is the final leg of our journey as we head home to Antigua.


“John King! Get down from there right this instant!”


“Yes, Mother.” I jumped down from my perch, a rickety brown crate, and dutifully stood beside her. Her lips were moving but I paid her no mind. All I heard was endless chatter, the kind that could give a lad quite the headache.


“Stand right here,” she said, pointing to an imaginary line on the deck. “I will return momentarily.” She adjusted her sunhat with one of her white-gloved hands and wagged the finger of her free hand in my direction as a warning. She walked away, her high heels clippety-clopping on the deck, like horse hooves on cobblestone.

Barbara lives in Hickory, NC and works with her husband in their two businesses. She enjoys writing in her spare time and is anxious to send Brotherhood of Pirates out into the world of readers looking for new adventures. 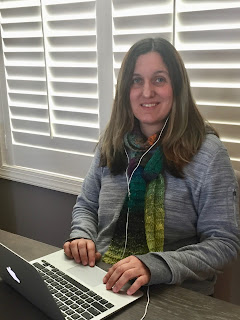 I'm on the home stretch of what I call the first hard revision. I'm working to fill in the plot holes, timeline gaps, and overall inconsistencies that I try not to get too distracted by when I'm pushing to get a rough draft onto the page. The hard revision takes me awhile--I've been working on this one for almost three months and I still have about 38 pages to tackle. It's also a tougher draft, in many ways than the rough--because I have to go back and actually make all the big, creative leaps of the rough draft fit into a reasonable plot and narrative framework. But once this pass is complete, revisions become much more joyful and manageable.

I let an idea roll around and compost in my brain for awhile before actually putting my fingers on the keyboard. So I'd say the initial idea occurred to me about a year and a half ago. I really got started on rough drafting almost exactly a year ago. The start-to-finish rough draft took me from September--late November of 2017 and I've been in revisions ever since.

First drafts, in my opinion, are pretty much always awful--or at least mine are. This may not be the case for more skilled writers! The challenge, I think, is to give yourself the freedom to not get too distracted by first-draft crumminess. You're just laying the track at the point for better things to come in subsequent drafts.

I hope to push through the rest of the hard revision in about 1-2 weeks. Then the manuscript will go out to 2-3 of my regular critique partners. Once I receive and incorporate their feedback into another 1-2 (much lighter) revision passes, I will seek out someone who hasn't read any of my early drafts or heard anything about the story. Fresh eyes are very important at this stage of the revision. I work with several trusted critique partners, who know my work well and have offered invaluable thoughts and feedback on all stages of the draft. When I (and they) feel like the manuscript is getting close, that's the time to find a reader who hasn't heard a thing about the story.

Originally from upstate New York, Monica now lives in central South Carolina, where she, her family, and their honeybees own and operate Old Swamp Apiary. When she isn't beekeeping, Monica travels between the Alaskan bush and southern Belize as a physical therapist. Her first novel, Thaw, was published by Front Street Books and was a Cybils finalist.


**********
Those of you who are writers know that it seems as if there are an infinite amount of drafts and revisions before reaching "The End." What stage are you in? Brainstorming? Outlining? A messy first draft or a final-before-I-send-it-out-into-the-world draft? Are you querying agents? I'd like to hear your comments--and maybe I'll incorporate your answers into a future blog!

Once again I am reminded just how much effort all of you writers put into creating reading enjoyment for the rest of us.
Blessings & Happy Valentine's Day!

Thanks, Connie. It is readers like yourself that make it all worthwhile!

It seems I am always in the creation or revision stage of several picture book mss at any given time. I LOVE it!

Thanks, Carol, for the encouragement and inspiration you have provided me over the years!

Wow! These stories sound really interesting! Keep pushing, y'all!!! There are people waiting to read this books!! You got this!!

I'm about to start editing my trilogy, after getting all three books drafted. There's still much to be done, but reaching the "all books are drafted" is a nice milestone. I'm ready for the next step!

Thanks Jean and Julian. I'd say both of you are at important stages in you writing!

These stories sound so good, I wish y'all the best of luck!

how about telling us where you are in your current WIP, Gray Marie??

Nice post. Thanks for this one. Always interesting to hear how others do it.

Sadly school has been detaining me, but I hope to speed up my progress this summer. I am currently outlining and writing out a few of the scenes in my attempt to piece together this puzzle of a story in my head. ^_^

School first, Gray Marie! But nothing can stop you from dreaming & outlining & planning!

It’s always heartening to read about the writing journey of other writers and discover I’m not the only one to take years to write a book. Thanks for this new series of posts, Carol.

You are not alone, Clara!

I started writing my first draft of For Keeps in October. It is the third novel in the Trina Ryan Series. I am writing my favorite part- the ending. I always know the ending of my story before I start writing, and then my imagnation makes a few alterations.

Great to see other writers journey whether it be their first or second or fifteenth book. Loved the blog .

Thanks, Deborah! How about you? What stage are you in?

Hi Carol, Great blog idea. I am writing the my first draft of the third novel in the Trina Ryan series, For Keeps. My ideas are moving in the story, and I'm trying to write to the end before I start restructuring the plot. This part of writing is fun, but a long process.

Thanks, Sheri. I'll include your comments on next week's blog. EVERY stage is LONG and hard!

I loved reading about Monica's writing process and how detailed she was about going from idea to rough draft to revising and finding early readers. My favorite part was when she discussed just pushing through a rough draft without editing. This is something I struggle with all the time as I haven't found a way to shut off my internal editor.

While procrastinating on submitting my first book - a middle grade novel - I'm working on the first draft of a novel of three fascinating women set in Wilmington, NC. While my original outline may not accurately portray the final story, I find that looking back at it from time to time tends to kick my creative juices into gear again.
Lauris Burns
laurisburns@gmail.com

Lauris--Your WIP sounds fascinating! Thanks for visiting this post too, and best wishes on your submission.

I understand that problem, Danielle! You have 2 chances in the hat--so far!

Ah, it is so fun to be reminded of this happy gathering. Thanks again, Carol for hosting us. Put my name in a second time for the current giveaway. Pretty please.

You got it, Joyce!

Thanks for the second chance at what looks to be a great book!

THanks, Tiffany. You're in twice!

Fascinating to compare both authors' revision processes and I love the need for chocolate. Please put my name in for another chance to win AIR. ALso, I may have posted three times on your blog post about AIR. I thought my computer wasn't working, but I think you first moderate comments and then post them later. If that is what happened, I apologize for being redundant!

YEs, I do moderate, and yes, I did get 3 answers. No problem. You're in for two chances. Air sounds like a book made for your nephew., Carmella.

A writer's conference is a great way to share ideas. Please enter my name for a chance to win AIR. Thanks for the giveaway!

You are welcome, Gail. You're in three times!

It's interesting to see how other writes deal with various parts of their processes and compare them with my own. Makes my own process feel "normal," LOL.