True confession. I am not a football fan. I don't know one play from another and when dragged to a high school game by my husband, will patiently wait until half-time and then beg to leave. (Let's hear it for the marching band!)

But after listening to BACKFIELD BOYS (August, 2017 Farrar, Straus, and Giroux) by sports journalist John Feinstein, next time I watch a game I'll pay a little more attention to what is actually happening on the field. Yep. This young adult book for boys (although female football fans will also enjoy it) is that good. 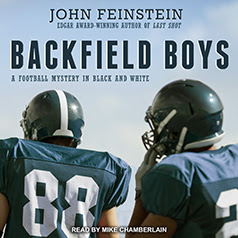 A short prologue sets the stage for the book when a member of a defeated touch football team says to Jason and Tom: "You two should make history. How many great quarterback receiver combinations have the black guy throwing to the white guy?" From that opening premise, John Feinstein spins out the adventure of best friends Jason Roddin and Tom Jefferson--two New York freshman who rock the world of an elite sports-focused boarding school--and the nation.

Written in an omniscient point of view, the reader is primarily privy to Tom and Jason's thoughts as they navigate the practice fields of the prep school. Tom, an African American, is the "Bullseye" quarterback. Jason is nicknamed "White Lightening" because he's a fast wide receiver. When they get to school and attend their first practice, they're surprised when their positions are switched. They protest, but to no avail. Soon, they and their two buddies--Billy Bob a white boy from Alabama; and Anthony, a huge black lineman who loves to eat--suspect that there's some heavy duty racism going on behind the scenes.

Despite plenty of realistic obstacles, the boys figure out what's going on at the school, who is behind the racial discrimination, and how the coaches are covering up the story. In the course of the book the four boys make friends with the Hispanic student athletes (who fill them in on some of the political realities of the school) and four female athletes (conveniently, two are black, and two are white). The truth of how deeply racism runs in the fictional Virginia prep school is revealed at the school dance when the inter-racial couples are told to stop dancing with one another.


Although some readers may find the ending predictable, I couldn't stop listening to it. Published in 2017, this contemporary book might startle readers from ages 12-18: the roots of racism still dig deep into our American consciousness.

I appreciated narrator Mike Chamberlain 's clear reading of Backfield Boys but I felt like his portrayal of Billy Bob--the tall southern boy with a deep drawl, was the most accurate. Although the hispanic secondary characters sounded authentic, I think Anthony, the southern black boy, was not as effectively portrayed. Click here for an audio snippet.

Even if you're not a football fan, you'll still enjoy this book and want to pass it along to the young male (or female!) reader in your life. Leave me a comment and I'll enter your name. Share on social media or follow my blog, and I'll enter your name twice. PLEASE make sure to leave your email address if you are new to my blog. Winner will be drawn on March 2.
at February 27, 2018

Thanks for your review. My husband and daughter are both football fans but this love of the game has escaped me. Perhaps I need an education!
Connie
cps1950(at)gmail(dot) com

Once again, Connie, your name starts the giveaway list! Thanks. You would enjoy the book.

This sounds like an interesting listen though i'm far from a fan. Maybe it'll help me appreciate the game more so enter me please. After I finish it, I'll donate it to my local library to add to their holdings where I'm sure it'll find many rabid fans...
lindalou (at) cfl (dot) rr (dot) com
Thanks!
Linda

Thanks for stopping by, Linda. YOu're in!

Sounds really terrific! I'd love to win and share with some football loving friends after I listen to it!

I'm not much of a football fan anymore. It interferes with my hockey watching. That said, I have a grandson who loves football. He might enjoy listening to this. Thanks for the chance and the post.

Carol so current and relevant. Wonderful article. Loved to be considered in give away. Hi

I have two teenage grandsons. Enter me in! Thanks!
Linda Gutheil

I will, MRS Gutheil!

This sounds like a book my daughter will absolutely love, Carol! She’s crazy about football, and knows the game well, too. :)

Happy to add your name, Dorothy. I know there are some young women out there who love football. Your daughter will like this book!

Thanks for a great post, Carol! This sounds like a wonderful book. Would love to read more.

Thanks Cindy, you're in!

Sounds interesting for my grands-and their dad! Another fun post to read. Thanks, Carol.

Thanks Sheri, but I picked a winner yesterday. Put it on your amazon list to get for them!