Boy Bites Bug: A Review and an E-Book Giveaway!

Congratulations to Rosi Hollinbeck who won BACKFIELD BOYS from last week's blog. Rosi is my California counterpoint since she reviews and gives away books too. You might want to follow her blog!

Many of my faithful blog followers have read about how Rebecca Petruck has mentored me while I've written Half-Truths. She's guided me through countless revisions with an amazing talent to see the forest and tell me which trees need to be felled.

Rebeca can do this, because she's a gifted author. (Here's my review of her first middle grade book,  Steering Toward Normal.)

Now I have the privilege of introducing her second book, BOY BITES BUG (Abrams, May, 2018). 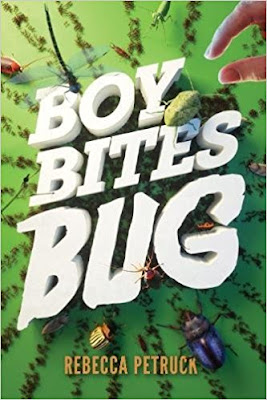 Although you might look at this amazing cover and fun title and think this is simply a humorous book for boys. But I can assure you that the story takes the reader on a much deeper journey than that.  And of course, girls will enjoy it too!

Seventh grader Will Nolan has a problem. In fact, he has more than one. Stinkbugs have invaded the school library "bobbling like weather-worn boats on a calm sea." (p. 5) His best friend, Darryl, decides to squash them using Will's copy of Wrestling for Dummies.

Knowing the stench that would produce, the new kid, Eloy, intervenes with,

"No one asked you, cholo," Darryl snapped back.

Will inhaled sharply. It felt like the world went into slo-mo. (p.6)


Will is caught off guard. There are other Hispanics in their Minnesota school, but Darryl's attitude makes Will uncomfortable. Things go from bad to worse when the boys start daring each other to eat a stinkbug. When Darryl responds with,

Will didn't say anything. His tongue was frozen in shock at hearing the friend he'd known since kindergarten talk like that. The Mexican?... He knew better than to talk trash about people because of where they came from. (pp. 9-10)

Will takes the heat in order not to look like a prejudiced redneck, tosses the stinkbug into his mouth, and "Bug Boy" is born.

But not without serious fall-out.

Rebecca skillfully portrays Will's journey of self-discovery and figuring out who his friends are in the events that follow like falling dominoes. This serious theme is against the backdrop of Will's development as a wrestler and the humorous interplay and drama of boy vs. boy.

In this snippet, you'll glimpse how Rebecca accurately captures the boy's voices and Will's internalization. This scene takes place after Simon, one of Will's friends, anonymously sends him 1000 crickets.


Back at school Monday morning, Will unloaded books from his backpack.

And freed half a dozen crickets.

He banged his forehead on a locker door, repeatedly.

"Bug Boy strikes again!" Simon said. He nudged a cricket that hadn't taken off yet and hooted when it arced through the air. He poked into Will's backpack. "What are you doing with the others?"

Will froze, head still pressed against the metal lockers, cold seeping into his brain. He turned slowly. "So it was you?"

"A thousand crickets? Of course it was me! So what will you do with them?"

Will imagined "nudging" Simon and watching him arc through the air. "Why didn't you warn me?"

"Are you kidding? I wish I could have seen your face. A thousand crickets are funny!"

"Not when they escaped in my house and I had to kill them!"

"What did you do now, losers?" Darryl leaned against a locker, acting extra casual.

Will darted an instinctive glance toward Eloy's locker, but he wasn't around, which was strange but for the moment kind of OK.

Ever since Darryl had stomped off to the library last week, he and Will had been weird together but trying to act normal until they got back to normal. Calling one another losers was an ordinary thing, a razz just because.

But after killing all those crickets, Will felt like a loser for real. He tried to shrug it off. (p.116-118)

As I mentioned, Rebecca has helped me dig deeper into Half-Truths. As I read BUG, I realized that Will's journey into discovering his own subtle prejudices was similar to what Rebecca encouraged me to probe about Kate Dinsmore, my protagonist.

With the risk of including a spoiler, towards the end of the book, Will has the following "Aha!" moment:

Eating grasshoppers wasn't exactly part of Eloy's day-to-day life, but it wasn't weird, either. It was even ordinary when he visited his family in Mexico. But Will had treated it like it was weird and worse than weird, a trick to get back at someone.

Eloy had put up with Will a lot longer than Will would have if the situation was reversed. The only person who had done anyone a favor was Eloy. He'd given Will the benefit of the doubt, trying to make him see. (p.198-9)


As I teach my writing students, figurative language, or Muscle Words, are the engines that drive good writing. Here are three of my favorites. Can you guess what the first one describes?

Brown-and-beige banded antennae twitched at Will from a too-small head resting on extra-wide shoulders. It looked like a miniature football player in pads. Speckles like dimples on a golf ball dotted its brown body and thick outer wings. (p.9)

The day had started so normal. But it had gotten chased around the mat and pinned like a lightweight taken down by a heavyweight. (p. 30)  (Note: I love how Rebecca used the wrestling theme to highlight what Will was feeling.)

When Mr. Taylor took attendance, Will felt as if someone were pulling his belly button through his back. (p.136)

There are tons more examples in the book--you'll just have to get a copy to discover them yourself!

For fans of STEERING TOWARD NORMAL, the ending of BUG ties neatly back into Rebecca's first book. And since a book on entomophagy would be incomplete without recipes, Rebecca has included three that are from The Eat-a-Bug Cookbook  by David George Gordon.


A WORD FROM THE AUTHOR

I asked Rebecca why she chose wrestling as the boys' sport. She responded: "I fell into wrestling simply because I wanted to do something I don't see as often as other sports in books, and then it ended up being perfect for the story. Wrestling is all about the mind, about committing to those six minutes. You can lose a match before ever stepping on the mat if you don't believe in your skills or yourself. It's a wonderful metaphor for Will's journey because he's made a commitment to not only Eloy but also to himself and the kind of person he wants to be, and he has to see it through. On one hand, it is him alone on the mat, but he also has the support of his coaches and teammates so he's never alone, and that's true for Will off the mat, too."


One way we support authors is by pre-ordering their books. You can find BOY BITES BUG on Amazon or on Bulk Book Store if you want to order it for your classroom. It would make a great classroom resource to open up conversations about prejudice as well as ways to feed the planet in the future!

I can't give away my arc because the book is "on tour" and goes to the next reader.
But, Rebecca is giving away an e-copy. Leave a comment by March 9 and I'll enter your name. Share this on social media (and tell me what you did) and I'll enter your name twice. If you are new to my blog--welcome!--and please leave your email address.

Carol, this certainly sounds both fun and thought provoking! Thanks for sharing and I just shared in FB & Twitter.
Blessings!
Connie
cps1950(at)gmail(dot)com

It is both, Connie, Just started the list with your name entered twice. Thanks for sharing!

I did love Steering Toward Normal and it sounds like I will like this one as well. Thanks for telling me about it. And thanks for choosing me for your last giveaway! I can't wait. I will, of course, pass on this giveaway. Someone else should get this goodie.

Thanks, Rosi. Yes, I think you and your grands would enjoy it!

Love this excerpt! And I also love how Rebecca used the metaphor of wrestling for her MC. Sounds like a great book!

You'd love this book, Jillane. I'll add your name to the list!

Rebecca, this sounds like a winner. Can't wait to read it, and thanks Carol for giving us this peek!

You're in the running, Linda!