The Hero Two Doors Down: A Review and Audio Book Giveaway

Congratulations to Jo Lyn Worden who won JUNK and to Dorothy Price who won BULLY.

The Hero Two Doors Down is perfectly titled. Written by Sharon Robinson, Jackie Robinson's daughter, this fictionalized account of eight-year-old Steven Satlo's friendship with his hero, is a book that elementary age boys and girls will enjoy. 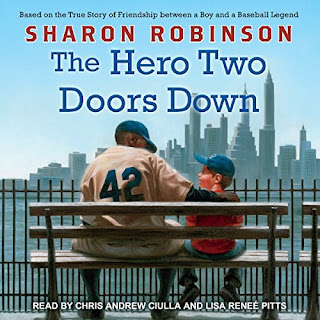 The year is 1948 and baseball is king. In New York, you are either a Yankees or Dodgers fan and Steve and his father share a great passion for the Dodgers. The author paints an authentic picture of the time period: neighbors sitting out on their front stoops listening to the game on the radio, going to an opening game as a huge occasion for a young boy, and school chums playing stickball together. Although Sharon Robinson says this is a work of fiction, it is based on the stories which Sharon heard her mother and Steve's mother tell.

Central to the book is Steve's excitement when he hears that Jackie Robinson, his hero, is moving onto his street  Although this section of Brooklyn had been primarily a Jewish neighborhood, the Robinson family is one of the first black families to integrate the area. When some neighbors protest, Steve learns valuable lessons about prejudice from his father.

Steve is thrilled when Jackie accompanies him to the school yard and teaches his peers how to slide home, provides tickets to a game for his class, as well as when he is invited to decorate the Robinson's Christmas tree. Since he's Jewish, this was a first time experience for Steve. A misunderstanding ensues when Jackie and his wife Rachel buy the Satlow's a Christmas tree--not knowing their friends are Jewish.

Chris Andrew Cuilla and Lisa Renee' Pitts both did a great job as narrators. This book would be a good classroom resource for third and fourth graders.

To entice you, here is an audio snippet of the book and the trailer, narrated by Sharon Robinson.

Younger children will like the picture book Jackie's Gift: A Baseball Tale for the Holidays also by Sharon Robinson.

Leave me a comment by August 23 and your email address if you are new to my blog. If you share this on social media or become a new follower of my blog I'll enter your name in the giveaway twice.
at August 18, 2018

This sounds like a great book for young readers and I myself have always been interested in the legendary Jackie Robinson. Thanks Carol for this review and giveaway. I have shared it on Twitter and FB.
Blessings!
Connie
cps1950(at)gmail(dot)com

I like that there are a number of positive messages in this story.
turtle6422(at)gmail(dot)com

Thanks Connie and Jana Leah. Your names start the giveaway list!

I hear this is a great story!! lbruffino67@gmail.com

Lbruffino-- thanks for leaving a comment and I'll enter your name!

Oh my! A really cool angle on the Jackie Robinson story. Put my name in the hat, please! The trailer is terrific!

Thoughts I had left a comment but don't see it here. I would love this view of the Jackie Robinson story! The book trailer is terrific!

You're in Joyce. Thanks

Sounds like a wonderful book. As a die-hard Giants fan, I need to mention there were three New York teams -- the NY Yankees, the Brooklyn Dodgers, and the NY Giants. I will pass on the drawing. Thanks for the post.

Of course, Rosi. You know much more about baseball than I do!

This sounds like a great book! Add my name to the list, as I'd really love to have a copy. My first publishing credit was for an article in Highlights about the number 42. I wrote it after we had been to several major league games and had seen the 42 hanging in every ballpark.

Gretchen, yes you wold enjoy this book! Your name's on the list.