Among the Imposters: An Audio Book Review and Giveaway

Among the Imposters is the second book in the Shadow Children series by Margaret Haddix. Although I hadn't read the first book, Among the Hidden, Ms. Haddix's reputation is legendary and when this book was available through Recorded Books, I was glad for the opportunity to review it.

As expected from an award-winning author, the reader is quickly acquainted with Luke Garner's history and enough information to make this second book understandable and enjoyable. Although classified as young adult, upper level middle grade readers will also enjoy this dystopian novel. 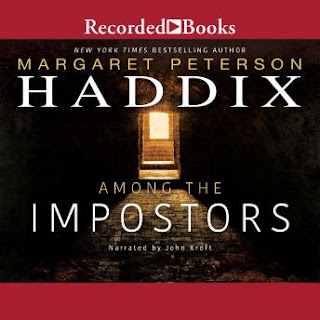 
The only link Luke Garner has to his parents or his brothers, Matthew and Mark, or to his best friend Jen who recently died, is his real name. But it is no longer safe to be Luke. It is only safe to be Lee Grant.

Luke is a shadow child. Just like all third children, his parents hid him from the Population Police so that he would survive. (The population laws came about because of a famine and not enough food for everyone.) His goal in coming out of hiding is to help other third children although it is unclear to him how he will accomplish this.

Now, at twelve-years-old, Jen's father risked his own career to obtain an identity for him and bring Luke to Hendrix School for boys. Never having been off his family's farm, Luke feels out of place and is frightened that the teachers or the other boys will discover he is not who he is pretending to be and that he is an imposter.

Inside the school he is the victim of bullying but also experiences a great deal of anonymity as the teachers pay little attention to him. Gradually he realizes that many of the boys are autistic or agoraphobic and he wonders what Hendrix School is really about--which he figures out by the end.

An accidental encounter with a door leads him outdoors. Remembering the woods and how his parents grew food, he decides to plant a garden. The garden is a great source of pleasure and gives him unexpected confidence.

Eventually, Luke recognizes that, everyone at the school is a chess piece and most of the boys are pawns. Life gets complicated when he meets other third children and he wonders if Hendrix is a place for all of them to hide. His antagonist tries to befriend him but then Luke discovers he is a traitor. Power shifts and double crossing throughout the novel keeps readers guessing--who are the imposters?

Hendrix writes in a close third person POV and Luke's "What if?" questions lead the narrative. In a world where nothing is as it seems, Luke gains voice and agency throughout the book. He determines, "He was not a pawn to be moved across a chess board according to other people's plan. " In a satisfactory manner, the ending allows Luke to reach his goal of helping other third children and makes readers want to read the sequel. What happens next?

The book raises important questions about population control, the role of the government, loyalty, friendships, and dishonesty. I checked on Goodreads and there are many reviewers (both teens and adults) who loved the book. One reviewer found that the Shadow Children series became more and more violent as the books progressed. Therefore, I recommend reading/or listening to it yourself before passing it along to a young reader. In my judgement, this particular novel was not violent.

The book is ably narrated by John Kroft. Here is a link to the audio snippet.

Please leave me a comment by June 21 along with your email address (if you are new to my blog) to enter this contest.

What a great giveaway! It's such an interesting, scary premise.

I am a fan of this author, but haven't read this book yet. I appreciate your honest review and chance to win a copy to listen to on my long drive up north this summer.

Thanks Danielle and Theresa. Your names top the list!

Sounds like an interesting book Carol.
Thanks for sharing it with all of us.

Thanks Rosie! Please leave your email address in case you win!

I have read other books by this author and liked them. Maybe I will give this a try. I will pass on the giveaway. Thanks for the review.

The plot sounds very intriguing. Thanks for sending to me.

I love YA books for their angst-of-growing-up themes, and their dystopian plots lead the way to explore those struggles even more. What a powerful concept to forbid a third child. Definitely adding this to my TR stack...even better it is on audio. Thanks for the recco, Carole!