The Next to the Last Mistake: Review and ARC Giveaway

For a second week in a row I'm happy to bring you another clean, contemporary YA novel. I requested The Next to Last Mistake by North Carolina author Amalie Jahn from the publisher, Light Messages, because of the racial themes. It was interesting to see how Jahn handled interracial friendships since that is a theme in my WIP, Half-Truths. 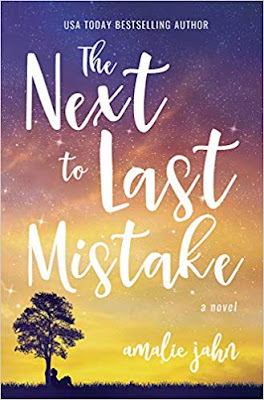 
Tess Goodwin's peaceful, uncomplicated life in rural Iowa changes the moment her father announces he has reenlisted in the Army. The family moves to an army base in Fayetteville, NC  and Tess is forced to say goodbye to her not-quite-a-boyfriend, Zander, and her beloved cow, Daisy.

Conflicts navigating her huge new high school mirrors her conflicts over making new friends. When Leonetta, a black girl, is assigned to be her mentor, Tess is surprised by what they have in common as well as how their friendship develops despite racial differences.

Tess's eyes are opened when Leonetta receives prejudicial treatment, and when she herself is the recipient of cynical comments because she's Leonetta's friend. Tess is enraged by the way her friend is treated and Leonetta explains the rules about being black. Throughout the book Leonetta guides Tess into a greater awareness of Tess's own hidden biases:


"You said it because you have your own biases you carry around with you. We all do. We can't help it. We're human. But that doesn't give us a free pass. You gotta check your privilege, keep an open mind, and consider other people's feelings before you open your mouth. If you do that you'll be okay." (p. 141)

Jahn based this book on interracial friendships she had when she moved to Fort Bragg and her husband was deployed. Good fiction often comes out of her own life experiences. I appreciate Jahn wanting to honor these relationships by showing what her black co-workers taught her about friendship across racial barriers. But some of the dialogue was heavy with lessons and doesn't sound like teenagers bantering back and forth.

Despite that concern with the novel, there are scenes that are teen-age authentic. When the girls confront the school bully at the prom; when Tess's father announces that he is being deployed to Syria and he gives a "weary, splintered sort of smile that nearly breaks my heart (p. 227); when Zander and Tess begin to figure out their relationship going forward; and when Tess sees Daisy again and breaks down and sobs.

The motif of chess threads naturally throughout the book. Tess, who played with her father and Zander, begins a chess club at her new school which does surprisingly well. In one conversation with her father over who will win the war in Syria, we find the reason behind the book's title:


"There's this saying in chess: 'Victory goes to the player who makes the next to last mistake.' It basically means during a game of chess you can make mistakes a long the way and still come out ahead as long as you learn from those missteps and adjust accordingly. You don't need to do things perfectly from the beginning to eventually get it right in the end. I've found over the years the theory applies to life as well. And I'm pretty sure it will be the same for war." (p. 253)


Some readers might find that there is too much backstory in the beginning about Tess's life in Iowa as well as a lot of flashbacks about Zander. But overall, I would recommend this book to teen girls who are interested in exploring interracial relationships. Kudos to Amalie Jahn for sensitively tackling a difficult subject as a white author--and keeping it clean.

This book is now on my want to read list after reading your review and post. I am intrigued by the military family, the friendships, and especially how the author deals with racial issues. This sounds like an important book. dhammelef(at)yahoo(dot)com

thanks, Connie. You're in!

This sounds like an important book for teenagers to read. Thanks for telling me about it. I will try to check it out. I will pass on the giveaway. Too many books not enough time.

Put me on the list. The topic intrigues me because I attended interracial schools growing up in MI.

You're in, Sandra! Another book for your grands??

Carol, I was interested to learn how the author penned authentic YA dialogue and handled the sensitive subject of race. (No need to enter my name).

Carol, I was interested to learn how the author penned authentic YA dialogue and handled the sensitive subject of race. (No need to enter my name).

Cat-- thanks for your comment. It would be an interesting read for you.

I have this book as a must read because of the issues it deals with and how it sounds like such an emotional and powerful read.