Congratulations to Theresa Jones who won Emily Out of Focus from last week's blog. Remember, when you don't win a book, check it out of your local library. If it's not in their catalog, you can request a purchase. Another way to support authors! 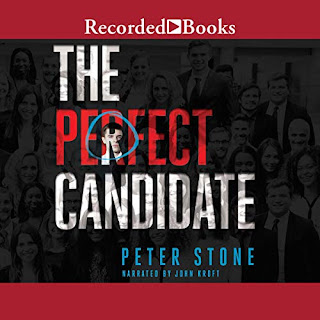 I am always delighted to find a well-written young adult novel to recommend. The Perfect Candidate by Peter Stone passed my "Is it clean?" standards with a book that is entertaining, suspenseful, and will be enjoyed by both girls and guys.

Cameron Carter, a recent graduate of Lagrima High in California, is excited about his Washington, D.C. summer internship with his congressman, Billy Beck. He wants to honor his late mother's memory because she was also an intern on the "Hill." Since he's from a small town and a lower-middle class family, he feels out of place in D.C. but is convinced that this internship will jumpstart his political future and provide an opportunity to "make a difference."

He quickly discovers that there are reasons that D.C. is referred to as the "swamp." His fellow-staffer, Ariel, gives him a mysterious message about contacting a girl named Caitlin if anything should happen to her. When she dies in an apparent drunk driving incident, Cameron is left with a lot of questions--and a dizzyingly fast cover-up by Representative Beck who is accused of having had an inappropriate relationship with Ariel. Who is speaking the truth and who is spinning public opinion?

When he is contacted by a stranger who turns out to be Memo, an FBI agent, Cameron is both spooked and intrigued. Memo insists that Cameron is in a unique spot as an intern. He has "all the access but no profile" to investigate the apparent suicide of Branson, a pharmaceutical CEO. Cameron reluctantly agrees because of Memo's carrot--Cameron's father will receive a large landscaping bid that will set his business for life.

Cameron's research, interrupted by a romance with the Mexican ambassador's attractive daughter, leads him from one disturbing clue to another. Why did Branson commit suicide? How was his death related to Ariel's? Who was Caitlin and why did Ariel want him to contact her? Why did Ariel's mother (a junior congresswoman who has been assisted by Beck) say, "We all tell the stories we want to believe"? How is this all connected to Congressman Beck, who appears genuinely interested in him and concerned for his constituents?

Cameron's slightly sarcastic voice is authentic for a rural teen experiencing D.C.'s subterranean train system as well as the inner workings of the political system. The life and death stakes make this a page turner (if you're reading the book) or keep you entertained on a long car trip. And by the way, you'll never guess the surprise ending!

Here is an audio snippet from John Kraft, the able and entertaining narrator: The Perfect Candidate.

To enter to win my copy of this debut YA book by Peter Stone, please leave me a comment by June 10. I'm giving it away in conjunction with the summer issue of Talking Story,  Celebrate Teens. Please leave your email address if you are new to my blog.

When I first heard about this book, I put it on my must read list, hoping my family would gift it to me for my birthday as I love this genre. Thanks for the chance! dhammelef(at)yahoo(dot)com

Sounds intriguing! Thanks for the chance to win!

Thanks Jana Leah, Linda, Danielle, and Becky. And if you don't win--get it out of the library. It's super!

Oh, totally enter me in! If I don't win I'll be checking out my library.
And love that closing quote ;D

I love the reminder that if we don't win the audio, we can check it out or request it from our public library. :) I'd love a chance to win this for my school library--thanks so much for the chance, Carol! :)

Thanks, Jolene and Keturah. You're both in!

Thanks for the review. It sounds terrific. I will pass on the giveaway.

Count me in. This sounds like something I'd really like to read and then pass on to my granddaughters.

You're in, Sandra! You and your granddaughters will enjoy this audio CD.

This book is on my TBR and wish list! I love the premise. Thanks for the chance!