Congratulations to Jo Lynn Worden who won an autographed copy of "God's Blessings of Fall." Thanks to everyone who entered this popular giveaway.

I've been plotting and thinking about my next book, which is tentatively titled, TOXIC. It will be a sequel to HALF-TRUTHS with Kate's younger brother, Woody, as the main character. In the beginning of HALF-TRUTHS, Kate and Woody's father (Ben) leave for the Korean conflict. One of the ways that Kate connects with Lillian, her grandmother's housemaid, is that Lillian's brother, Isaac, is also in Korea.

TOXIC take places a year after the Korean War ends, after Ben and Isaac return home. I realized that I needed to better understand what Korean soldiers experienced during the war and when they returned. Following Joyce Hostetter's apt advice, I went looking for some Korean vets. Here are my new experts who generously shared their experiences.

When I contacted Dick, he told me that his story was boring and that he had it "soft."  He was in the artillery and helped man a howitzer that was 4-7 miles away from the front line.

As the picture below shows, it wasn't easy work and the noise was intense and caused hearing loss in later years. But, as Dick said, "We didn't feel a sense of danger. We were young and stupid. I never saw any wounded."

One of the eight men in his gun crew refused to pull the lanyard. He would load and aim it, but never fire it. 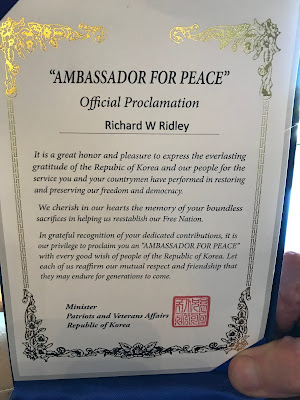 This was a letter which Dick received many years later, along with the medal hanging around his neck in the top picture.

Dick worked as a senior designer for Ford and Pontiac in Michigan and then at Freightliner Trucks in Charlotte, NC. In his retirement Dick volunteers in the Carolina Room at the main library. He enjoys scanning documents, maps and pictures and wonders what the story is behind the images. 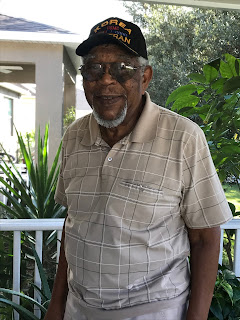 Joe had hoped to go into the Army because he'd heard the Marines were rough and tough and he wanted accounting training. But when he enlisted, they needed more men to fill a Marine platoon and the decision was made for him.

Although he reported that he was generally treated equally as whites, he could tell by the way in which the drill instructors spoke to him and the four blacks (out of 64 men in the platoon), that they were prejudiced. He was assigned to the Motor Transport along with many other black soldiers. His job was to bring men, ammunition, troops, and supplies to the front and take back the wounded or the dead.

"When I wasn't driving, I was in a fox hole." Joe told me about a time in which he hid in a fox hole when the enemy was attacking, along with another soldier. Like other accounts I have read, much of the fighting took place at night. "There were explosions of light. I couldn't see anything and would just shoot towards the sound. I didn't know if I hit somebody or not."

Later, he realized that his fellow Marine in the fox hole got shot. "I didn't know he was dead until I felt his blood." 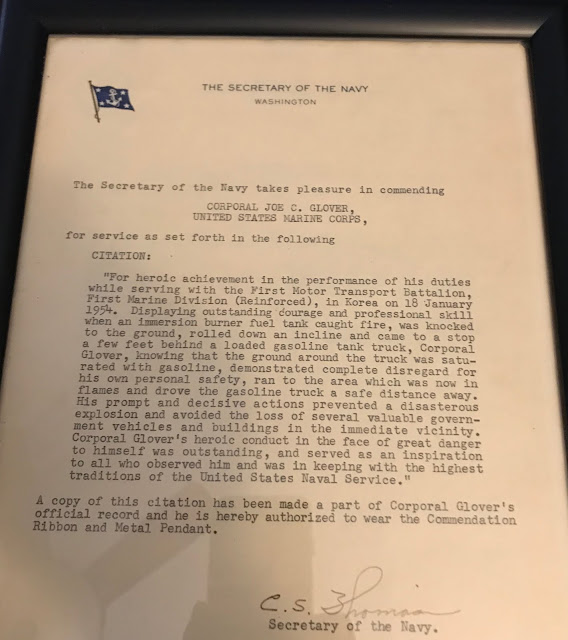 This letter of commendation hangs on the wall in his den.

Joe stayed in the Marines and was in the Motor pool for several years. He kept pushing to take accounting classes but was often told that the classes were full. His wife Dorothy added that he was not treated with respect when he returned to the States. Joe's persistence paid off. He received the training he wanted, worked his way up, and became a fiscal officer in charge of a large budget, reporting to a Major.
Joe retired from the Marines, worked for the Postal Service, and is now retired in Travares, Florida. He and his wife have 27 great grandchildren.

Preston Woodward's family estimated that he had 100 pieces of shrapnel in his body--many of which were never removed because the surgery would have damaged his body. Unashamed, Preston told me to feel the 2-inch bump in his arm and showed me scars on his legs.

Preston joined the Marines right out of high school. "It was the right thing to do," he said. "They needed people and the Marines was the roughest outfit."

When he was unloaded off the ship in Korea, the men were marched straight to the front. It was the middle of the night, the men were hungry, and the terrain was difficult. He was a part of a nine men fire team; he carried the BAR (Browning automatic rifle).

"They wanted us to confront civilians and jump off to take a small hill. It took so many casualties to accomplish what we were supposed to [do]. It was all mixed up with people coming and going. Wounded going out and new Marines coming in. We weren't trained right, we thought we were ready, but we weren't. Seeing the real Marine Corps changes you."

When Preston got hit in his leg from an explosion, he bandaged it himself. "Small fragments would scatter and hurt you. The corpsmen were busy and I was no wimp. I kept going  and prayed it would cease." As far as he could see, the war had grown on either side of him. "I used to think, 'Why do people line up on two sides and kill each other?'"

As we talked, Preston's shoulders, neck, and legs jerked and twisted. He still has a lot of pain from the shrapnel and some of his memories were jumbled. As far as I could tell, after a severe bombing, he laid out on the field wounded for 4-5 days. If he moved, the enemy would lob more grenades. The force of the explosions from the concussion grenades flipped him over.

Preston was captured and taken to a Chinese medical station.  After that he was a prisoner-of-war for "one year, ten months, and sixteen days" until the war ended. Although Preston doesn't remember much about that imprisonment, he relayed that he was interrogated and threatened with death. He didn't have the information they were looking for, but they attempted to brainwash him.

After the war, Preston returned to Florida and had multiple operations. "I was fearful of loud noises like a shotgun. I'd jump up and think someone was coming at me." He had nightmares and drank too much. His parents taught him to be courageous, his father told him that his anxiety would end, and his friends advised him to go back into fearful situations. Seeing what alcohol did to his buddies helped him to quit; he did resume hunting and got over his fear of loud noises.

Preston had difficulty staying on the job because of his physical limitations due to his injuries. He was widowed three times and now lives in an assisted living facility in central Florida. Parked out front is his Ford black pick-up truck that he would love to drive. 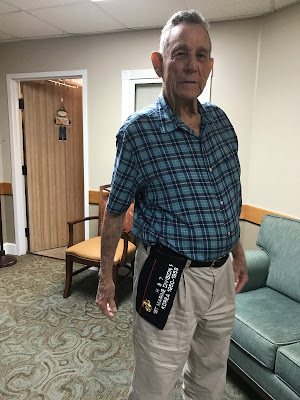 After we talked, Preston carefully tucked his cap inside his belt. "That's what we used to do," he told me with a smile. 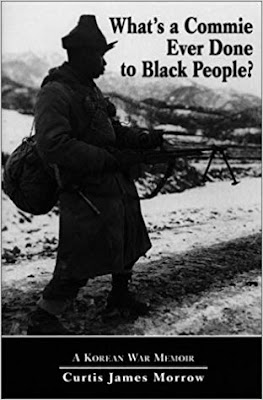 My last expert to highlight in this post is not someone who I have interviewed. Rather, I "met" Curtis Morrow in the pages of his memoir, What's a Commie Ever Done to Black People? (McFarland & Co., 1997).

Curtis was 17 when he enlisted in the Army and joined the 24th Infantry Regiment Combat Team. This unit, originally known as the Buffalo Soldiers, was the Army's last all Negro unit; it was deactivated in 1951 when black soldiers were officially integrated into the other units in Korea. 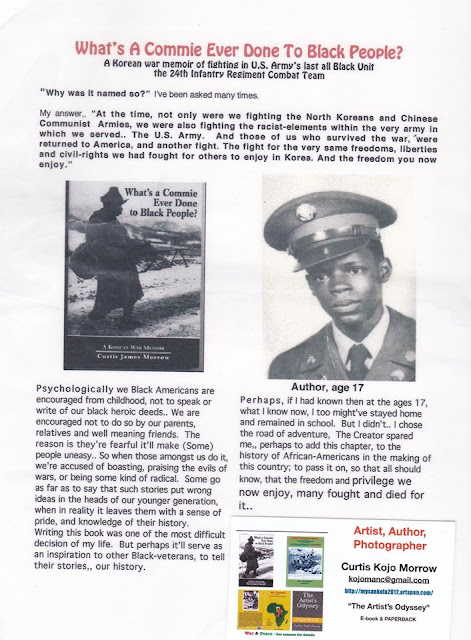 I will most likely review this book, so let me just say that it is raw, authentic, gritty, and memorable. It is not for the faint of heart, but it illuminates the Korean conflict through a young, vulnerable, and courageous black teenager. The word pictures that Mr. Morrow painted have stayed with me long after I read them.

Mr. Morrow is an author, artist, and freelance photographer who lives in Chicago.

These men sacrificed more than I can imagine. Now, their stories will inform mine. As I write TOXIC, I'm thinking about the horrors which Woody's father, Ben Dinsmore, saw in Korea and how that will shape Woody's life.  What did Isaac Harris see and experience? When he comes back to Charlotte, what will his life be like, and how will he influence Woody?

I'm using One Stop for Writers to explore these characters' backstories. I hope you hang in there with me as I build a new story.

You are the research queen, Carol! Great way to honor these men on Veteran's Day, too.

You do some great research, Carol. I am sure it will pay off for you with your books.

"Why do people line up on two sides and kill each other."

That's my question too. I do hate how war takes countless lives, creates refugees, and haunts those who served. May God bless and keep these priceless individuals you interviewed. Thanks Carol for sharing their stories with us.

thanks, Joyce and LInda, for stopping by. I know you both honor veterans too.

Go for it, Carol. This sounds so interesting and powerful.
Sheri

Thanks Sheri and Rosi!

The fun of researching and writing about previous wars is the ability to speak to those who served. I'm amazed that these four gentlemen were willing to talk about their experiences. So many who have served can not or will not speak of the horror they saw. I am sure, by your asking, you helped each of these gentlemen more than they helped you.

I look forward to reading the second book in your series.

You are absolutely right on everything, Sandra, except the "any day now" part!

Thank you for sharing these incredible,brave men. Definitely a great way to research for your characters!