Congratulations to the following winners from last week's blog:

Joyce Hostetter and Sandra Warren won RUN TO THE LIGHT. 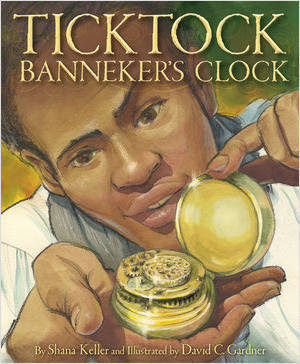 It's amazing what you can learn through picture books.

Ticktock Banneker's Clock is another engaging and informative picture book biography by Shana Keller. I recently featured Shana for her new book, Bread for Words about Frederick Douglass. Ticktock's text, along with illustrations by David C. Gardner, depict an important episode in Benjamin Banneker's remarkable life.

Born in 1731, Benjamin, was a self-taught free African American farmer, naturalist, author, and surveyor.  He corresponded with Thomas Jefferson on the topics of racial equality and slavery and authored several almanacs. One of Benjamin's accomplishments was carving a striking clock. The book was voted as one of the best STEM books in 2017.


The story opens with a beautiful drawing showing Ben working on his farm in the Chesapeake Bay. 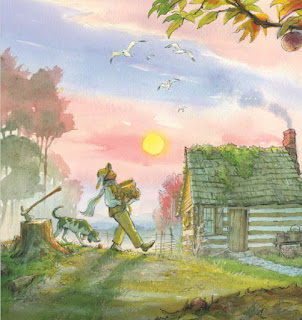 After his harvesting work was done, he had "time to dream." Sometimes he played the flute or violin, but this day he was fascinated with the inner workings of a pocket watch. 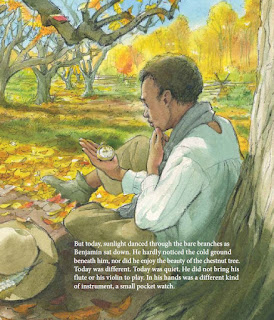 He decided to make a time piece, one that could sit on a mantel or hang for a wall. He took the watch apart, studied the tiny gears, and made diagrams. He carved the clock pieces out of wood, but found that the pieces snapped and broke.

So, he dried the wood--a time consuming process--and then re-carved the pieces. 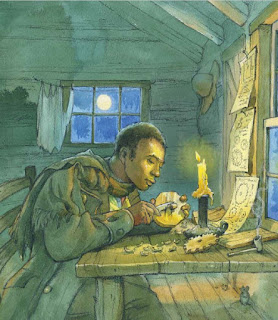 This time, the wheels, pins, and gears didn't break! He had a bell made and timed the clock with the sun. 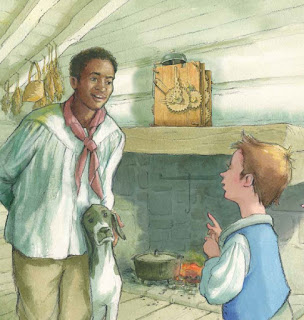 Neighbors from far and near came to see his invention; the clock chimed every hour on the dot for the next forty years.

Ticktock Banneker's Clock will make an excellent curriculum resource for grades K-3. Sorry, no giveaway this time, I'm adding it to my library. Instead, I asked Shana what led her to writing this book. Here's her answer.

When my oldest daughter was in the first grade, she came home with a small paragraph about a man named Benjamin Banneker. Even though I had majored in African American history in college, I didn’t recall seeing his name before and suddenly, I was on this path of research that led from one surprise to another.

After reading everything I could find online and at the library, I visited the Benjamin Banneker Historic Park and Museum in Catonsville, Maryland. I met with Justine Schaeffer the director at the time and explained my interest. We discussed all things Banneker. I toured his lands which is where the park and museum are located. I saw his recreated cabin (Banneker’s burnt down days after his death). And, I met with some of Benjamin’s collateral descendants - children of his nieces and nephews. I also met with a griot, a storyteller, who was familiar with Banneker’s history.

I discovered many intriguing things about Benjamin Banneker. He was a landowner. He was never enslaved and mostly self-taught. He was well respected in his community and often relied upon to calculate math problems. He wrote almanacs. He corresponded with Thomas Jefferson about civil rights. He was an astronomer. He helped survey the land where the nation’s capital would stand. And of course, he built a striking clock using a pocket watch as his guide. Given all of his accomplishments, I realized there was a lot to choose from and focus on. The achievement that struck me the most was how he built his clock. Benjamin’s goal was to never stop learning, and so is mine!

Thanks for a great review!

I've never heard of this amazing and inspirational man before. I think it's cool that he also played the flute. I'm just about to get mine out to rehearse for our upcoming concert.

Entertaining & educational story with pretty illustrations. Thanks for letting us know about it.

ANother picture book to study--Jana and Danielle!

What a fascinating story and one probably few know. I will look for this book. It sounds awesome. Thanks, Carol!

Thanks, Linda. You will enjoy this book!