Letters From Space: A Picture Book Review and Giveaway

Former astronaut Clayton Anderson is not a stranger to my blog. I reviewed his previous book A is for Astronaut (also from Sleeping Bear Press).  Letters from Space is just as informative and engaging. As you'll see in the samples below, the illustrations by Susan Batori are full of humor. Kids will laugh out loud as they learn about disposable underwear; food, spiders, and plants in space; and how astronauts fly EVERYWHERE within the space shuttle.

All of this is communicated through fictional letters "home" to friends, young fans, and family. Because of course, no one has perfected receiving mail from space... yet! 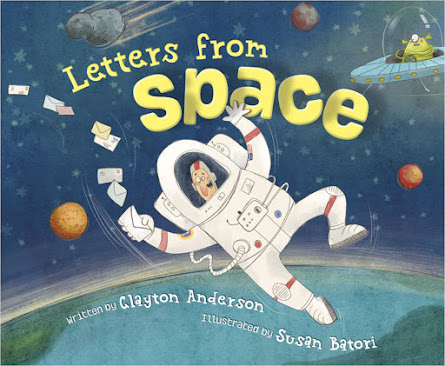 In a letter to his mother, Clayton describes his excitement at liftoff.

It was loud, it was scary, and the entire space shuttle shook like crazy...We went faster and faster, and then--everything went quiet. I started to rise out of my seat. I was weightless! 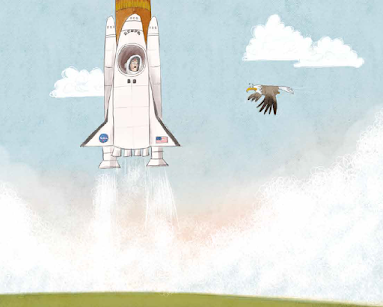 In response to a young fan who just got a puppy, Clayton writes,
We can't have pets in space. It would be neat to have a dog or a cat, but what a mess with no gravity! Where would it go to the bathroom?! 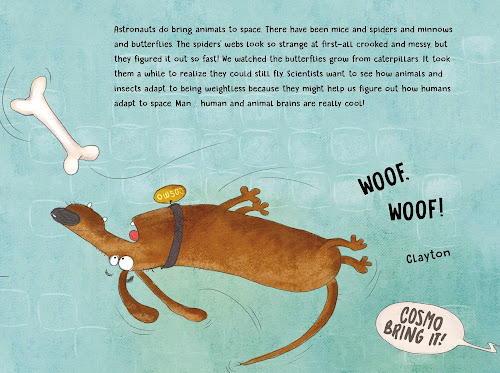 Clayton takes a space walk and tells his brother, We were out there for over seven hours and I rode on the robotic arm. I was like one of those guys who fix wires on utility poles. But in SPACE! Man, did I have some great views of the Milky Way and the space station! 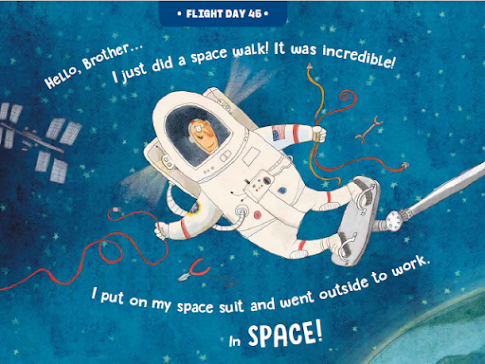 Clayton shares his favorite foods in space. I love to start my meal with a can of stuff they call "appetizing appetizer." It looks kind of like baby food. Yum. After that I always love a nice can of lamb with vegetables or pork and potatoes. It looks a lot like cat food. Maybe it even smells like cat food But I swear it doesn't taste like cat food. 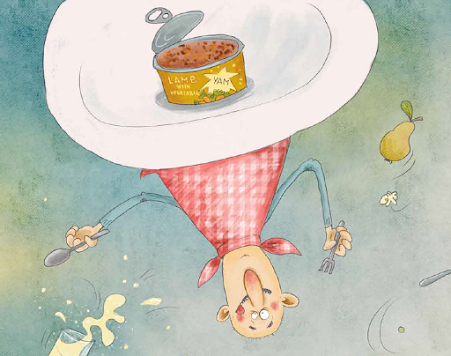 It turns out that when Clayton was little he used to read Superman comic books.  Now that he's in space...he is Superman every day! 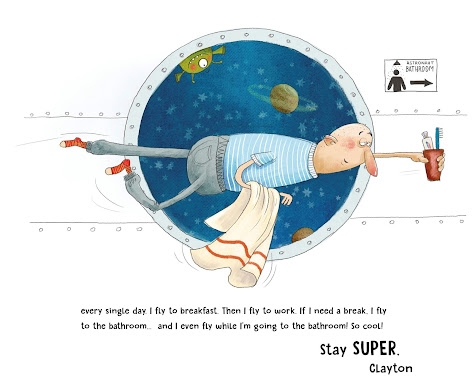 Clayton is coming home and he's so excited that he's doing flips in space! He writes to his mother, The time has flown by up here (ha ha) and life in weightlessness has been really fun. 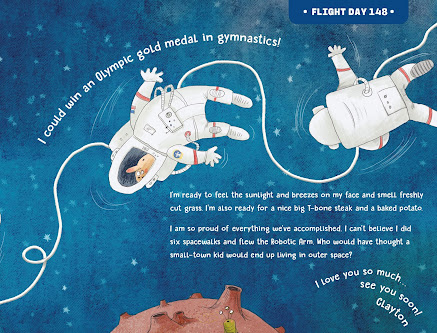 The book ends with two pages of facts about growing food in space, training to be an astronaut (in a pool!), gravity, teamwork, and lots of other things you didn't know.

A STEAM book, this will be a great addition to the K-3rd grade curriculum. Not only will children learn science facts, but as Astronaut Anderson says, "Kids LOVE THE LETTER FORMAT. It encourages reading AND writing."

By the way, most of the names used in the letters are real people in Clayton's life. It was his way of paying tribute to his teachers, college professors, childhood friends, mission control, and his family.

Do you want this book for the child or student in your life? Leave me a comment by January 1 at 6 PM and I'll enter your name. Make sure you leave your email address if you are new to my blog. If you share this on social media (and tell me what you did) I'll enter your name twice.
at December 30, 2020

Looks like a fun educational book for kids! I know my grands would love it!

This sounds like great fun to read. Another book to add to my “must have “ list of books for gifts.

I enjoy everything about space and this book has a format unlike any other books I've read focusing on space travel/living in space. Thanks for introducing us to this fun book. I shared on tumblr: https://yesreaderwriterpoetmusician.tumblr.com/post/638942405440192512/letters-from-space-a-picture-book-review-and Happy New Year! May 2021 be a safe and healthy one for you and your family!

What a fun book! My space-obsessed daughter would love it.

My nephew would love this. He's obsessed with all things space related.
turtle6422 at gmail dot com

then he would really enjoy this book, Jana Leah!

This looks like a great book for my space enthusiasts. Thanks for the review.

Thanks Carrie, it is. ANtoinette, I need your email address to enter your name!

What a wonderful way to teach kids about a trip into space! The art makes it even more fun and adventurous. I'd love a copy for my grandson.

Yes, he will Barbara!

One of my grands is obsessed with this topic!
Thanks for sharing,
Hewi Mason

Then you must get him this book, Hewi!

What a cute idea for a book, and it sounds like a great way for kids to be learning about space. Thanks for the post.

Thanks, Connie, for sharing in two places. Your name goes in three times!!

As the author, I am so excited by all of your positive comments! Please check me out at www.astroclay.com. You will find other titles there. I do enjoy working with Sleeping Bear Press and we are currently working on our next project! Happy New Year to ALL!

I hope a lot of folks check out your book, Clayton!

Your name is in, Rosi!