TAKE BACK THE BLOCK: A MIDDLE GRADE REVIEW AND GIVEAWAY 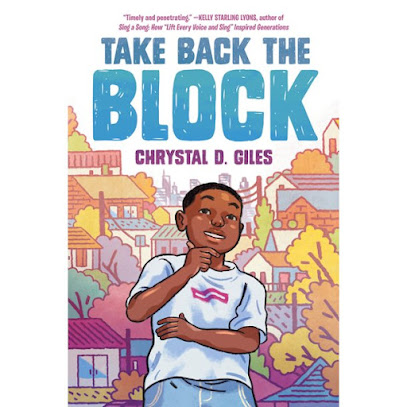 I spent the morning of my eleventh birthday carrying a sign that read WE WERE HERE FIRST.
How do you like that for a dynamic opening line? How could any middle-grade reader not want to know more about this protagonist?
In the first chapter, readers find out what Wes wants: not to be a part of his mother's protest against the destruction of apartment complexes which are scheduled to be replaced by new condos.
But they will also see his love for his neighborhood. After the protest, he and his mother return home. Entering Kensington Oaks is like being hugged by a grove of lake trees and sunshine. (p. 6) Bravo to the author for immediately setting up Wes's conflicts.
The young protagonist's voice is also clearly heard. Here's a description of his former friend, Kari, whose family had to move out of the neighborhood after his parents split up.
Just last year, he rocked four different hairstyles. Bald fade, low fade, baby Afro, then twists. This year he started growing locs. They were short, frizzy, and uneven--kinda like him...
I peeked at the strings hanging from his shorts. I wouldn't be caught dead in that outfit. (p.23)
Giles uses this simple physical description of Kari to show more than what he looks like--we also have a glimpse of his character and Wes's too.
After meeting Wes's friends and his new middle school,  the plot begins to unfold. Wes's mother gets a notice that a development company wants to buy Kensington Oaks and redevelop it. Suddenly, his mother's concerns are now his.
Flashes of all my favorite memories popped into my mind--a highlight reel of my life. How could I leave all that? (p.51)
As Wes tries to figure out how the redevelopment will affect him and his friends (wouldn't it be cool to be able to walk to a place that sells organic smoothies?), he reads an article in the local paper that his Social Studies teacher wrote entitled, 'Is Gentrification the New Segregation?' With his teacher's help, he organizes a team of kids to join the fight and save his neighborhood. But there's a problem: not all of his friends' families want to resist the development. They'd rather take the money that is being offered so they can move into a bigger house.
Wes also needs to find a topic that matters to him for his social studies project. After ditching researching climate change, he finally realizes that the topic that matters to him the most is gentrification. He tackles it with gusto and ends up being a community organizer--just like his mom but--a much flyer version.
I don't want to give away the ending, but it's enough to say that Wes's determination pays off in a way that even he wouldn't have imagined.
I hope that readers will come away from reading this contemporary middle-grade book for boys and girls with the hope that their voices and efforts can matter.
Chrystal Giles writes in her Author's Note that although this book is loosely based on her hometown of Charlotte, North Carolina, her first up-close view of gentrification was during a walking tour of Harlem. She realized that change was sweeping away a great amount of Black culture and history. Although she thought that was only a big-city problem, when she came home she saw it was happening in Charlotte too. "Historic neighborhoods, parks, and restaurants would be there one month and gone the next. Beyond the places, what happened to the children and families? I wondered. That question plagued me for years and eventually became the motivation for Take Back the Block."
Chrystal's next book is coming out soon! I look forward to reading and reviewing Not an Easy Win.

I have an autographed copy that I am giving away. Please leave me a comment by January 4 along with your name and email address if you are new to my blog. If you are a teacher or librarian, please tell me and I'll put your name in twice.

I'm glad to see a book that tackles gentrification so head on. I can already see the main character has a strong voice, and it would be great to see him learn and grow, which will then help readers understand more about this problem.

Such a fabulous book! I already have it in the library but would love to be able to give a signed copy to a student. Thank you for the chance.

Thanks for leaving a comment, David. I need your email address to enter your name.

Thanks, Theresa. Your name goes in twice and starts the list.

Thank you for the chance to win a signed copy of a book I've been wanting to read since I first found out about it.

Such an interesting topic for a middle grade book! I know in Ireland, especially in Dublin, when areas are gentrified, people from the area can no longer afford to live there, and a whole lot of history can be wiped out. This book sounds really good, so thanks for sharing!

that's an interesting perspective, Valinora. Thanks for sharing it here.

I LOVED this book -- especially kids making a difference in their community! It's been a while since I've read it, but it definitely needs to be out there and receive a little more book love!

Thanks, Patricia. I'm glad you enjoyed the book!

I really enjoyed this book too. Since I already read it, I'll pass on the giveaway and let someone else win it. Happy New Year!

Thanks, Natalie, for commenting.

Such a great book and an excellent review. When I read it last year the character and plot just won me over. Thanks for the giveaway but let someone else win who hasn't read this compelling story yet. Happy MMGM and thanks for sharing your review this week.

Thanks for including me in MMGM this week and your comment. Glad you enjoyed Chrystal's debut novel.

This book looks fabulous! I would love a copy to share with my students!

Happy to enter your name, Emily--twice!

Wow! Those lines are gripping--I'll have to look for this book. Thanks for sharing!! As always, great blog, Carol!

Thanks, Marci. Happy to add your name to the giveaway list.

Sounds like a terrific book. I love that opening line. Thanks for telling me about it. 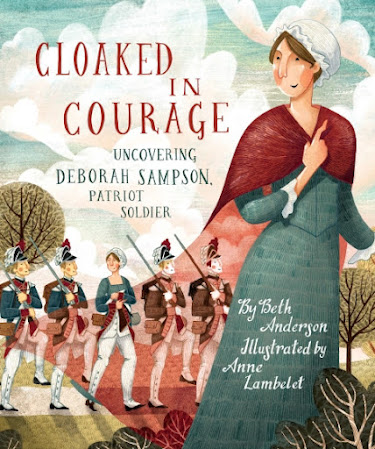