Not On Fifth Street: An Interview with Kathy Cannon Wiechman

As promised last week, here is my follow up interview with Kathy Wiechman, author of NOT ON FIFTH STREET. 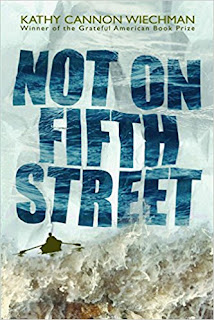 CAROL: Just like in LIKE A RIVER, you wrote NOT ON FIFTH STREET from two points of view. What led to that decision?

KATHY: NOT ON FIFTH STREET is about a rift between two brothers. When I was a kid and got into a dispute with one of my siblings, my mother always said "There are two sides to every story." And she wanted to hear them both. I felt the only way to give Pete and Gus an equal chance to tell their sides was to write it that way. Since doing that had worked well for me in LIKE A RIVER, I felt comfortable doing it again.

CAROL: Unlike RIVER, Gus’s POV doesn’t follow after Pete’s. You go back in time and show the reader what everything looked like from Gus’s POV. What led you to writing it in that manner? Why didn’t you flip-flop chapters between the two?

KATHY: Part of Pete's worry in Part 1 was due to him not knowing where Gus was or if he was all right. If I had alternated chapters, the reader would have known more than Pete about Gus's circumstances and wouldn't be able to commiserate with him about it, and I think empathy with the POV character is always one of an author's goals. I felt it was a good way to add to the suspense in Part 1.

CAROL: This conflict between Pete and Gus is crucial to this story. How did you come up with that?

KATHY: When I wanted to write a book about the '37 flood, I knew the flood itself wouldn't provide enough conflict. I grew up in a house with six siblings, my husband grew up with six siblings, and together we raised four children. I am quite familiar with sibling rivalry and the rifts that can cause conflict in a large household. It felt natural for the brothers' feud to be the key to the story. When I began my first draft, the first line I wrote was "Pete had never seen his brother so mad." In the final draft, that line appears in Chapter 2, but I let those words set the mood for the story.

KATHY: I was surprised at how much more difficult it was to get into Pete's head because he was based on my dad. I created Pete and he had to be Pete, not Dad. But that was tough to do. The part that was easier was knowing Dad's story so well, I always knew what would happen next. I also spent a lot of time in my grandma's house as a child, and I could always picture my setting so clearly, from the homemade picnic table in the sunroom to the back bedroom overlooking the garage to the mantel clock in the living room. 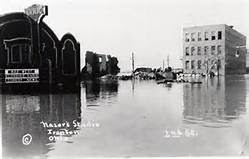 CAROL Can you give us some idea of how much is fiction and how much is fact? Obviously the flood and the fact that your father evacuated his family was fact. What else?

KATHY: Much of what Pete does, like taking the motor out of the refrigerator, my dad did. And like Gus, he was listed as missing. And my grandmother dug in her heels about evacuating because she didn't know where he was. His family did have his name mentioned on the radio as missing, and that call was put out by WLW from Cincinnati. Dad was not 14 or 15 like Pete and Gus. He was 20, but my Uncle Bill who marked the garage wall with the height the flood reached was only 12.

CAROL: How has life changed for you since receiving the Grateful American Prize?

KATHY: My day-to-day life is the same. I write or work on some part of the process every day. It might be research or promotional, but it's for my books. What has changed is my connection to the phenomenal team of people with the Grateful American Book Prize, who believe, as I do, that knowing American history is essential for today's young people. This group pays attention to what I am doing and they continue to help promote LIKE A RIVER even two years after it won the award. And the cash prize that came with the prize helps to fund my research trips.

KATHY: I am working on another Civil War novel. This one takes place in Wilmington, North Carolina during the final months of the war. And I am doing a bit of preliminary research for a possible sequel to LIKE A RIVER.

******
For a chance to win my ARC, please leave me a comment along with your email address if you are new to my blog. A winner will be chosen on August 17.

Thanks for sharing Kathy's thoughts. It will be interesting to see the thoughts of these two brothers.
Thanks!
Connie
cps1950(at)gmail(dot)com

Thanks, Connie. I think you would really enjoy this book. So even if you don't win (and your name goes in twice) I hope you read it!

Always fascinated with multiple viewpoints! I look forward to reading this one. Enter me, please!

Dear Kathy,
I admire you for writing about your father's doing what needed to be done to protect his family unselfishly and bravely. Clever to use the brothers difference of opinions in it.

Carol, thanks for interviewing Kathy.
I hope both of you do something fun to celebrate you tomorrow!

Thanks, Joan and Joyce. You are both in twice!!

Thanks, Joan. I always admired my father's ability to get things done. I hope this book would have pleased him.

Dear Kathy,
I know your father is proud of your book...no question in my mind about that!

I am really looking forward to reading this. It sounds like such a terrific story and interesting characters. I'm also working on a book sparked by my father's childhood, so I'm especially interested to see how this worked for Kathy. Thanks for an interesting interview.

Nice to hear from you Joan, Rossi, Joyce, and Kathy. And I love the mini-dialogue between Kathy and Joan! You're all in for a second time!

I wonder how difficult or challenging it was, Kathy, for you to use material from your own personal family experience and background. Your honesty in sharing about sibling conflict takes courage. Again, congratulations on your new book!

Carol, thanks for introducing me to Kathy and her book NOT ON FIFTH STREET. I love historical fiction and the fact that the main character is based on her father is particularly interesting to me.

Thanks Clara and Kathleen. Your names are in the hat!

Thanks for posting. I love historical novels and will be sure to get a copy!

Thanks, Nancy. You'll be glad you did!