Congratulations to Monica O' Quinn who won A Handful of Stars by Cynthia Lord. Thanks to so many of you for entering; this was a popular giveaway. And here's another!

Last week you heard how Ohio author Kathy Wiechman, the self-proclaimed "poster child for perseverance" attended workshops and critique groups for years before stepping into the "I'm a published author!" box. Today you'll hear more details about the workshops she's attended, the people who have helped her along the way, and the Grateful American Book Prize.

**********
CAROL: Can you tell us more about the Highlights workshops that helped further your career?

KATHY: Shortly after I attended Chautauqua in 1999, the Highlights Foundation began offering smaller, less expensive, workshops at their Boyds Mills location. I told my family not to give me birthday or Christmas gifts anymore, just donate money toward a workshop. My first one was Joy Cowley’s Writing from the Heart in 2001. I was hooked. I went from going every other year to every year to twice a year. I learned about Voice from Patti Gauch, promoting a book from Peter Jacobi, and about the publishing business from numerous experts. I even learned how to load and fire a muzzleloader, when I was researching LIKE A RIVER.

CAROL: Who helped you the most?

KATHY: I took more than half a dozen workshops with Rich Wallace. Not only was he encouraging, but he always seemed to spot what my writing was missing, and I came away with what I needed to move forward. Carolyn Yoder (Calkins Creek Press) saw the early chapters of LIKE A RIVER at a retreat in 2012. She encouraged me to keep going, told me things I could improve, and requested I send it to her when it was finished. I did, and she has been my editor ever since.

CAROL: What were some of Carolyn's suggestions? 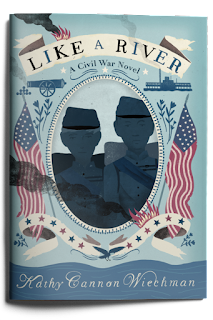 KATHY: Make Leander more likable, flesh out the characters of Crawford and Morgan a bit, and give the two halves of the book more balance.

CAROL: Why have you chosen not to be agented?

KATHY: When I first began, very few children’s writers had agents. But times have changed, and it can be extremely difficult to get a manuscript in an editor’s hands without an agent. I was researching possible agents at the time I was offered my first contract with Boyds Mills Press. I had an agent friend look over the contract before I signed it, but have never sought one to represent me. I am very fortunate to have been published by Boyds Mills Press, who still accepts unagented manuscripts. If I were a younger writer, I might seek an agent, but for the time being, I don’t feel it necessary.

CAROL: What advice do you wish someone had given you when you first started writing?

CAROL: Tell us about your experience winning the Grateful American Book Prize. How many books did you compete against? How did you find out about the contest? 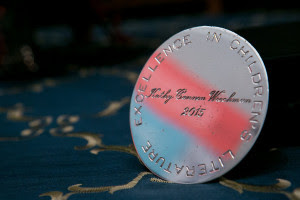 KATHY: I was told there were "more than 140" books competing for the Prize. Last spring, one of the marketing people at Boyds Mills Press told me they were planning to submit LIKE A RIVER for the prize and asked me to write about my research methodology for the submission form. I am incredibly grateful for the support I have gotten from the folks at Boyds Mills Press.

I never dreamed of winning an award. The Grateful American Book Prize is a new award, the brainchild of David Bruce Smith and Dr. Bruce Cole. This inaugural award was for writing about the past in a way that engages young readers in American history, something I have always tried to do with my historical fiction. The judges for the award are people who honored me just by reading LIKE A RIVER; deciding to award me the prize was beyond words. I received the award (an exquisite medal, a fantastic cash prize, and a lifetime membership to the New York Historical Society) at a cocktail party and dinner at Lincoln’s Cottage in Washington, DC.
I have always been a devotee of the sixteenth president, and LIKE A RIVER is a Civil War story, so the setting was perfect. Tours of the Cottage are available, and I tried to take one the afternoon of the award ceremony, but I was told the afternoon tours had been cancelled to allow for setting up for “a big event” that evening. My big event! After dinner, I was taken on a personal tour, which ended in the room where Lincoln wrote the Emancipation Proclamation. Heaven indeed for a Lincoln fan and history buff like me! 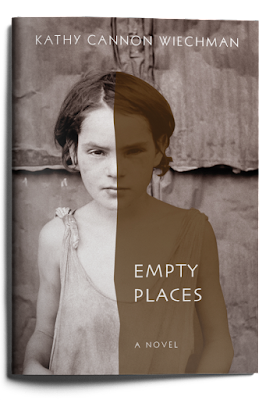 KATHY: My second novel, EMPTYPLACES, is due out in April, 2016. It takes place during the Great Depression in Harlan County, Kentucky, and has a few elements inspired by my husband's family. I am also working on new novels, writing and researching. I waited a long time to reach this stage of my career, and now I am busier than ever, but I enjoy it all, especially meeting with and hearing from the readers who like my book.


As I promised a week ago, Boyds Mills Press is providing a copy of LIKE A RIVER to one fortunate blog readers. Leave me a comment (make sure you leave your email address if you're new to my blog) and I'll add your name to the list of entries from last week. (If you left me a comment last week, you can enter twice.) Winner will be drawn on Thursday, December 10 so that you will receive your book in time for the holidays.

Thanks, Kathy, for sharing your journey and wonderful news with us.
at December 07, 2015

Thanks, Deb. You're in twice since you shared on FB!

Thanks, Carol, for inviting me to share my journey with your readers.

I can vouch for those Highlights Workshops although I've attended a few less than Kathy has. At one of Carolyn Yoder's retreats I heard Kathy read from Empty Places and boy oh boy, I am eager to read that one!

Yes, I agree- and I've been to far less than you have, Joyce. Guess what ARC arrived in my mail today?

Thanks for this great interview, Carol. Kathy, I am so thrilled to know you benefited from working with Patti Gauch on voice. I had the same experience working with her on my YA novel, Crazy. I can't say enough nice things about her as a person and a writing teacher/mentor. Looking forward to reading your book.

Kathy, I have enjoyed reading your journey to winning your award. I am especially excited ti read about your uocoming book, Empty Places and its setting of Harlan, Ky. Carol, thanks for continuing your conversation with Kathy.
cps1950 (at)gmail(dot)com

Thanks, Kathy, for sharing your story about perseverance. I'm so happy for your books to be out and will look forward to reading them!!
Once again, Carol, A great interview and motivating for others.

Great interview, Carol. I enjoyed reading about Kathy's journey and am looking forward to reading her new book.

Wonderful interview. Kathy's story is very inspiring. No need to put me in the drawing. I have read Kathy's book and liked it very much.

Thanks, Linda. I hope you will like the book as much as I enjoyed writing it.

Rosi, thanks for stopping by. To Linda, Jo, Sheri, and Connie-- you're all in!

And to Sheri, Connie, and Rosi, thanks for your interest in my story.

As always, I am inspired and encouraged by Kathy's words. She is amazing in the best sort of way. Cheers for Kathy!! Looking forward to the new book, too!

Thanks, Clara. And you'll get a chance to win EMPTY PLACES on this blog in April!

Great interview, Kathy and Carol. I loved reading about your writing journey and hearing that you asked family to give gifts of money for writing workshops. Way to go!

The cover of your upcoming novel has my interest already. Keep them coming!

Thanks, Linda. You're in again. Yes--that is a beautiful cover. and I have the ARC! Fortunate me!

Thanks Carol for another informative and inspiring blog.

Kathy, I loved that you asked for workshop money in lieu of gifts for important events and holidays. Many of us would love to attend a Highlights workshop but are stopped by lack of funds. Asking for gifts of money for that purpose puts them in reach.

You're welcome, Sandra, and you're in!