The forward of Blood Brothers makes clear Elias Chacour’s purpose in telling his personal story to author David Hazard: he wanted to show an unappreciated side of the Arab-Israeli conflict. First published in 1984, Chacour’s dedication to portray both Palestinian and Jewish prejudices is evident throughout the biography. Another theme is Chacour’s question, “What does it mean to love our enemies and be a peacemaker?” (Note: I listened to this book courtesy of Tantor Media. As a result, quotes might not be exact.) 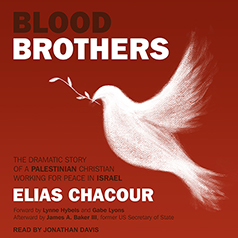 Beginning with his childhood in the hills of Galilee, Chacour’s faith and life’s work is grounded in his mother’s Bible stories and his father’s recounting the history of the Melkite church. Chacour pictured Jesus walking and working in the hills of Galilee—perhaps even in his own village of Bir’im since after all, the Mount of Beatitudes, was close to their home. He was attracted to Jesus’ fiery nature and the way in which He helped the poor. His father taught him two things: “We should love and respect our Galilean soil. Second, our lives are bonded together with the Jews--our blood brothers from Father Abraham.”
Even when the Zionist soldiers invaded and took their village, Chacour’s father said, “We do not use violence, even if someone hurts us… The Jews have been hurt by being exiled. They have lived in poverty and fear. They’re afraid. They’re weak because they’ve lost peace within.” Chacour was 8 in 1947 when Palestine was portioned and the armed Zionist solders frightened him. One million Palestinians who had lived there since Christ became refugees and targets of “purification.”  In a moment of painful irony, three years after they were expelled from their village they were hired back to care for their own, beloved olive trees. The army, the Haganah, not the government, ruled Israel.

After the Zionists bombed their village, Chacour was sent away to schools in Haifa and Nazareth. He felt a growing hopelessness and questioned his faith. How could there be peace like Jesus talked about in the Beatitudes? Eventually he was sent to a seminary in Paris to study for the priesthood. In explaining himself to others he attempted to counter public opinion. “We were not terrorists, we were terrorized.” During a visit to Germany he realized the similarity between Hitler’s persecution of the Jews and the persecution against his own people. He hurt for the Jewish people and recognized their need for a homeland but wondered why the persecuted had become persecutors. As he studied the roots of Zionism, he uncovered the political maneuverings behind Israel becoming the Jewish homeland.

His search for a life ministry took Chacour to the small village of Ibillin. He realized that the community was divided between Christian and Arab and that the only answer was forgiveness. He thought about Jesus as the peacemaker and wondered how he could emulate Him. As his work to promote peace grew in notoriety, he was a frequent advocate for bridge building between different people groups. The community center he started in Ibillin grew into a K-12 school of 2,750 of Muslims, Christians, and Druze. Today, Chacour is retired under the charges of sexual harassment and mismanagement.

Clearly narrated by Jonathan Davis, Blood Brothers--a book for adults and serious-minded teens--provides political and sociological insights into a country that has passed through many hands. But, unfortunately, it doesn’t provide the spiritual solution that is most necessary.

As a Jewish Christian, I found his Palestinian perspective to be interesting. From childhood, I was taught that Israel was the Promised Land that belonged to the Jews and had never seen Zionism from another angle. Hearing about how Arabs were forced out of their homeland was an eye-opener. Although I applaud Chacour’s wok to build bridges and seek forgiveness between people groups, I found that his work stopped short of the greatest need—forgiveness of sin with God.

Chacour often quoted Jesus’s words in the Sermon on the Mount: “Blessed are the peacemakers, for they shall be called the children of God.” (Matt 4:9). But he never mentioned what else Jesus said, “Blessed are they that mourn; for they shall be comforted.” (Matt 4:4) Most Biblical scholars agree: Jesus was teaching about our need to mourn our sin. Although Chacour said we must “remember the gospel of Christ” he never once mentioned that the gospel can be summarized with, “Believe on the Lord Jesus Christ, and you will be saved.” (Romans 10: 9, Acts 16:31).

Chacour said he was looking for peace. I’d submit that the only lasting, true peace comes when we find peace with God. “Therefore, since we have been justified by faith, we have peace with God through our Lord Jesus Christ.” Romans 5: 1.

I’m giving away my copy of this audio book. Please leave a comment by October 20 if you’d like to be included in the drawing. Make sure you leave me your email address if you are new to my blog.

Thanks for this thought-provoking review, Carol. I may have missed it, but did you mention if this is a YA book? It sounds like it is geared more towards adults, but then, many YA books have that flavor these days.

Yes, a book for adults--I'll add that. But a serious teen could benefit from it too.

Thank you for calling my attention to this book. It sounds very inspiring.
Blessings!
Connie
cps1950(at)gmail(dot)com

Thanks Connie, you're in!

Glad you left a comment, Joyce. this book seemed one you would appreciate.

This book comes from a very interesting perspective. Thank you for introducing this book to us.

That's what drew me to it, Kathleen-- the interesting POV. I'll add your name to the hat!

I love this book!

Erica, Have you read this? It sounds like you might have. Do you want to be entered in the giveaway?

This sounds fascinating. Thanks for telling me about it. I will pass on the drawing though.

Thanks for stopping by, Rosi.