Be Free or Die: The Amazing Story of Robert Smalls' Escape from Slavery to Union Hero -- An Audio Book Review

Congratulations to Linda Anderson Gutheil who won W Is For Welcome and to Michelle Wall who won Ebenezer Creek.

BE FREE OR DIE (St. Martin's Press, 2017) by Cate Lineberry is actually more than what the subtitle conveys. It is simultaneously a detailed account of how a young slave impacted the cause of the Union, as well as a panoramic view of South Carolina before, during, and after the Civil War. 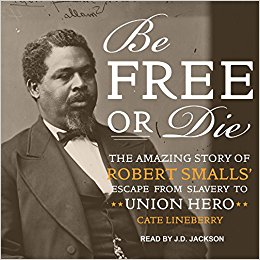 The biography of this unsung hero begins in 1862 with an extensive description of Smalls, a 23-year-old slave governed by his desire for freedom for himself and his family. Smalls grew up working a variety of jobs, eventually becoming a pilot on the steamer, the CSS Planter. In that position, Smalls conceived the dangerous plan to comandeer the boat and turn it over to the Union Navy. He knew that Southerners and even many Northerners didn’t expect a black man to have the intelligence to execute such a daring plan. Swearing the crew members to secrecy, Smalls planned his dangerous escape.


The promise of freedom was so strong that despite the high risk of being captured and killed and his wife and children tortured--Smalls carried out his plan. With his lighter skin and under the cover of darkness, he piloted the ship out of the heavily guarded Charleston Harbor. Other enslaved people had tried to get to the Union side in rowboats or canoes--but no one had turned over a ship like the Planter; a vessel that carried several canons and thousands of pounds of ammunition which the union desperately needed.

In Chapter 2, Cate Lineberry delves into Smalls' childhood. His mother Lydia, was part of the Gullah community in the sea islands and as a result, Smalls learned the Gullah language. He lived between the Gullah and white community, but since he was a house slave from the age of nine, he was at the mercy of whites.

It is unclear who Smalls' father was and some people have thought that it was Lydia’s master. But the author says that is unlikely because Lydia was the one who raised her master and was significantly older than him. But the ambiguity made me realize how these types of relationships were never quite accounted for. I found this interesting since the backstory of my WIP, Half-Truths, includes a similar master/slave relationship.

Robert’s early childhood was controlled by the realities of slavery: the deprivation of equality, the lack of privileges and rights; the metal badges slaves wore which separated them from free blacks. The latter reminded me of the yellow arm bands which Hitler forced Jews to wear.

Against the background of the Civil War and Reconstruction, the book details Smalls' adventures and accolades after he captured the Planter.  He became known as a hero to Northern whites and he inspired thousands of enslaved and free blacks. He worked for both the Navy and the Army; became a spokesman for freedom; helped convince President Lincoln to establish a black Union military force; was present at 17 major battles and engagements in the Civil War, supported the Port Royal Experiment for the education of blacks, ran several successful businesses, was a South Carolina Representative (1868-1870 and served five terms as the first black elected to the U.S. House of Representatives.

Lineberry includes a tremendous amount of historical context for all of these public and personal triumphs. Two particular events stand out in my mind. The first is his purchase of the house in which he had served as a slave. Here's a video that shows the exterior of the home and details this history. He spent many years entertaining in the home along with his beloved wife, Hannah.

The second was Lineberry's mention of Sherman's March to the Sea. The author discussed so many events that occurred in the South during the Civil War--I wondered if she would mention what happened at Ebenezer Creek. Sure enough, she included that devastating event which Tonya Bolden so skillfully dramatized in Crossing Ebenezer Creek.

At the end of a book that is skillfully woven together, educational, and inspiring, Cate Lineberry wrote, "Robert Smalls deserves to be celebrated not only as a union hero, but an American hero." I am grateful that she brought this story to life.

For more information, see Lineberry's website or her interview on C-SPAN.

Narrated by the talented JD Jackson, the audio CD produced by Tantor Audio, is a treat to listen to. You can here a sample of the book here.

Thanks for sharing. I'm always excited to learn about books, etc. that relate to this subject.

Thanks, Connie. This is another good one!

This looks like an interesting read. South Carolina has quite a history. Thanks for sharing!

Thanks, Dorothy. It really does.

Thank you, Carol, for sharing the truly amazing story of Robert Smalls.