In Lincoln Clears A Path (Calkins Creek, 2021) a new picture book by talented picture book author Peggy Thomas, our 16th president's accomplishments are presented from a different perspective. Although he is known for his stance against slavery, how many students know about his agricultural legacy?  In a book well-suited for home and classroom libraries, readers from 7-10 years of age are introduced to the many other paths which Lincoln cleared. 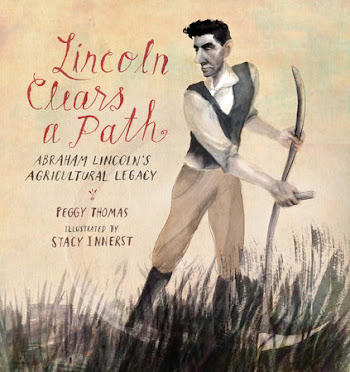 The book opens with seven-year old Abe arriving in the middle of the Indiana wilderness. This was not a farm. Not yet.

His family got to work. 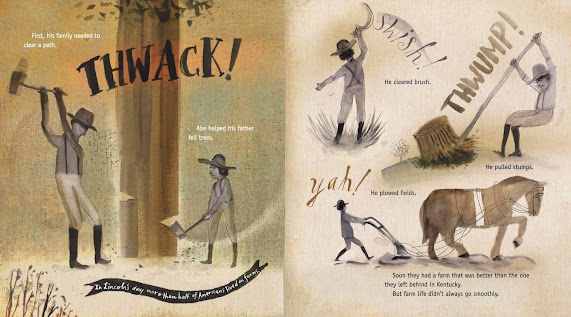 Along with his father, Abe felled trees, cleared brush, pulled stumps and plowed fields. At night he studied stars, math and poetry...Abe marveled at how the founding fathers--Thwack! Swish! Thwump Yah!--cleared a path for folks like him.

In New Orleans Abe saw how slaves were auctioned off and he wondered, Could anyone clear a path for them?

Back home in Illinois, his friends urged their talented friend to run for office. He was poor and uneducated. But his friends provided books to read, tutoring in math, and even a suit to wear.

In the Illinois legislature he cleared paths for better schools and more roads. He stood against slavery. "There is no reason in this world why the negro is not entitled to all the natural rights enumerated in the Declaration of Independence, the right to life, liberty, and the pursuit of happiness."

But soon after he was elected president, South Carolina seceded and the Civil War began (see this timeline for more information.)

In the middle of the war, Lincoln did something that was seemingly unrelated to the North-South conflict. He created the United States Department of Agriculture to support the farmers who were supporting the troops. 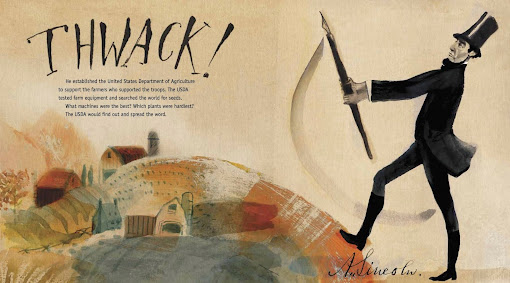 But that was not all.
With a stroke of his pen, he signed the Homestead Act and cleared a path west. "New free States are the places for poor people to go to and better their condition," he wrote. 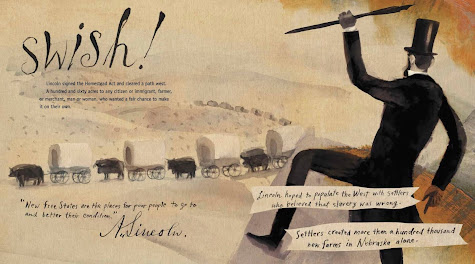 Then he signed the Pacific Railway Act and cleared a path across the nation. 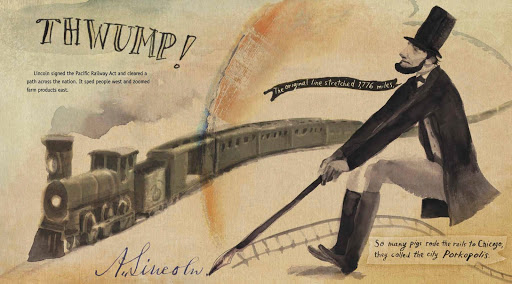 In addition, Lincoln created land-grant colleges which cleared a path for students to learn more about agriculture.

He cleared a final path when he signed the Emancipation Proclamation and created a path to freedom for slaves. 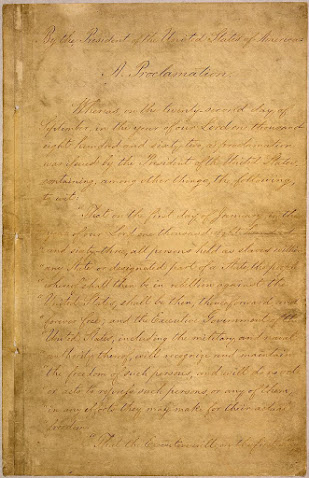 The onomatopoeia of the four words--Thwack! Swish! Thwump! and Yah! which repeat throughout the story will keep even younger readers engaged. The simple, yet profound message of what Abraham Lincoln accomplished is communicated through the text, his quotes, and interesting facts distributed throughout the book.

Nine pages of back matter include highlights from Abraham's childhood and adult years; how the Civil War affected U.S. agriculture; and a bibliography. There is additional information about the four acts; the author made sure to show how Native Americans were unfairly impacted by these acts.

I was particularly impressed with how Thomas discovered the theme by noticing Lincoln's phrase "clearing the path" in his writing. She writes, "Sometimes he was referring to the removal of rocks and stumps so a wagon could pass, but other times he was thinking about ways to remove much bigger obstacles like poverty, racism, and ignorance so that all Americans could lead a better life." She challenges readers by asking, "How could you clear a path?"

No giveaway this week! I'm saving this book for my grandchildren.

Thanks for sharing. When I was at the library, we often had requests for biographies suitable for younger readers and this is a perfect suggestion. Abraham Lincoln is a Kentucky treasure and this would be a great book for my 7 year old granddaughter!

Thank you Debbie and Connie. I hope you get the book for your granddaughter, Connie!

I grew up in Lincoln, IL. Abe Lincoln was and still is a huge presence there. This is a perfect book to share with my family and add to my collection!

I am from the Land of Lincoln and have visited many of the historical sites: Lincoln- Douglas debates, New Salem, Lincoln Log Cabin near Charleston, Illinois . I did not know he created the USDA and theHomestead Act. Sounds like a really great book!

A GREAT book for your grands, Jo Lyn!

Peggy's books are always terrific. I will have to get hold of a copy. Thanks for telling me about it.