Mr. Puffball: Stunt Cat to the Stars -- A Review and ARC GIveaway

Hands (or I should say paws) down, Constance Lombardo’s love for all things feline shine through her fun illustrations and text in Mr. Puffball: Stunt Cat to the Stars, an entertaining graphic novel for readers from grades 3-7. Constance admits that Mr. Puffball is a mix of all the cats she’s ever loved.  “Cats have funny, pensive faces, come in so many different colors, stripes, patches, etc. I can't look at a cat without imagining a speech bubble. They've got lots of personality and like to do their own thing and most of them do want to be movie stars!”

Mr. Puffball’s egotistic-yet-adorable voice is communicated in the opening lines. “My name is Mr. Puffball, and this is my story. It all started in a little town called New Jersey, home to such famous American landmarks as my house.”

His life is changed forever when he sees the movie, Cow-Cats & Aliens starring El Gato. From that moment on, this precocious kitten decides he must become a movie star. Despite nay-sayers among his siblings, his mother fuels his dream by telling him about his great-grandmother Zelda, a star in Cleocatra meets The Mummy. 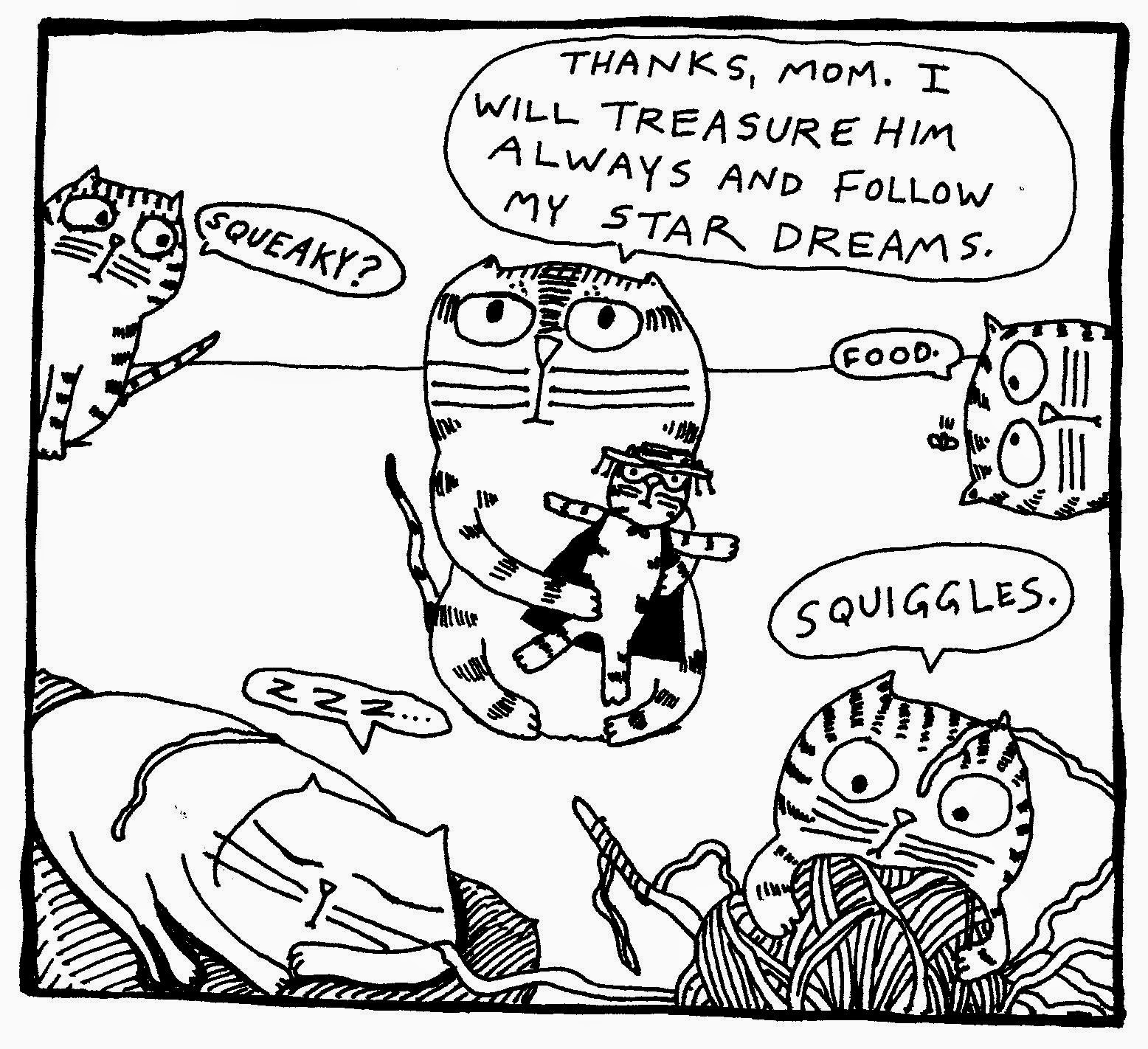 That’s all the inspiration Mr. Puffball needs. With his tiny replica of Mr. Gato tucked into a cloth waistband and a newspaper ad for a movie audition for The Great Catsby, Mr. Puffball leaves for Hollywood and sends postcards home to his mother.

Having just experienced a recent close run-in with Kansas tornadoes, I appreciated this illustration: 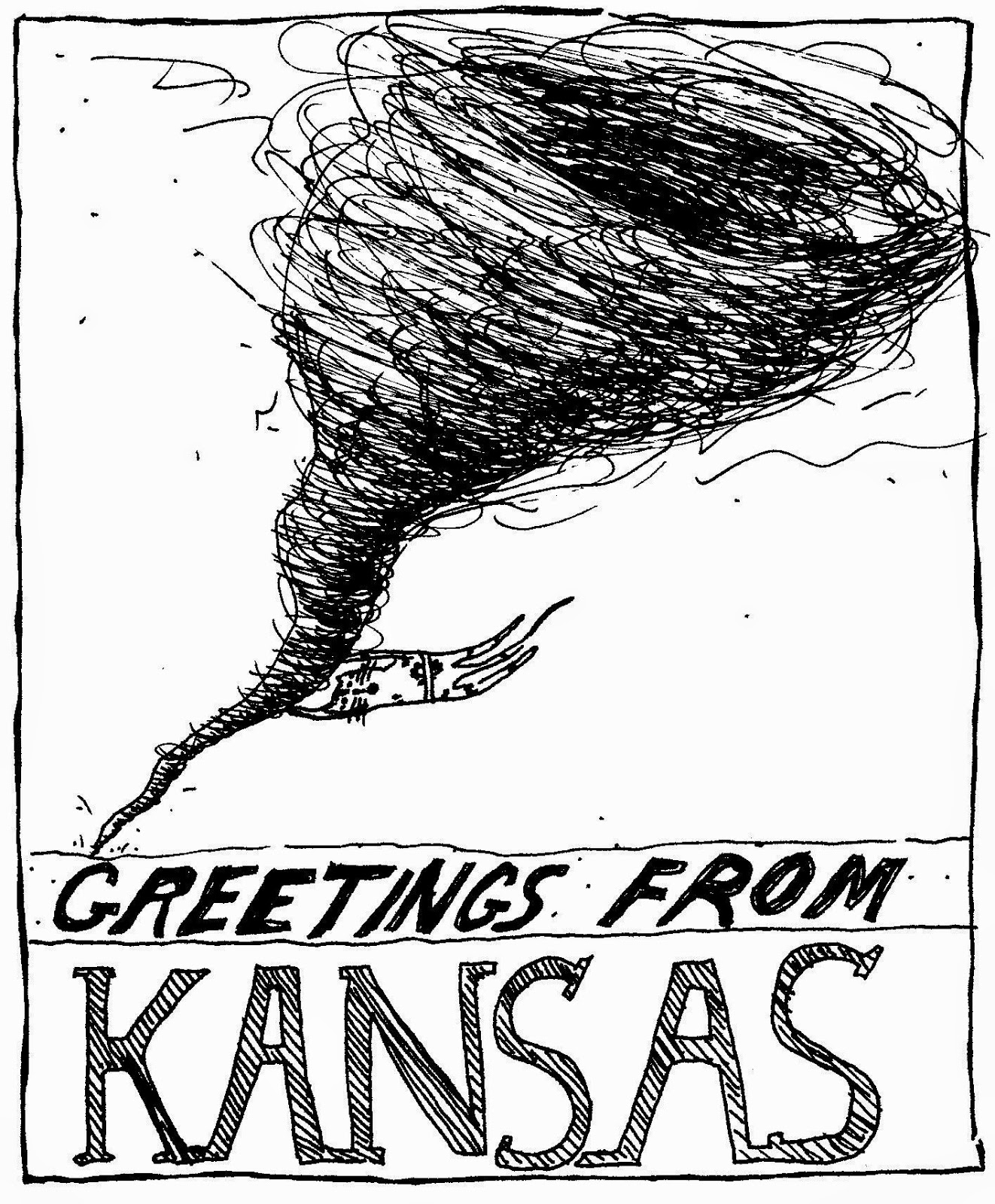 Unfortunately, fame and fortune don’t come as easily as expected. Metro-Olden Meower studios is closed and Mr. Puffball is twenty years late for the audition. His audition at Purramount Studios falls flat. But when Chester Grumpus (the producer of such great movies as The Sound of Meowsic and Attack of the 50 Foot She-Cat) takes him under his wing (err…his paw), Mr. Puffball meets three friends who help get his career off the ground.

Despite his excellent audition in Nine Lives to Live, Mr. Puffball only receives a part as an extra. Nine Lives is “a classic western with handsome heroes, sinister villains, and old-fashioned rattlesnakes… [the hero] El Gato is after Billy the Kitten, who square-danced with El Gato’s one true love, Veronica, even though she prefers ballroom...They steal Billy the Kitten’s ten-gallon hat, which turns out to only hold five gallons. Laughing about their misadventure, El Gato and Veronica ride into the sunset where they hope to open a hotel with a water slide.” (p. 96)

Determined to make El Gato notice him, Mr. Puffball lands himself a job as his stunt cat and becomes Bruiser’s prodigy: “Ride bad-temper horse now! Going backward! Faster! Don’t fall or you be trampled. See what I tell you?” (Hmm… Wonder whose dialogue Constance mimicked here?) 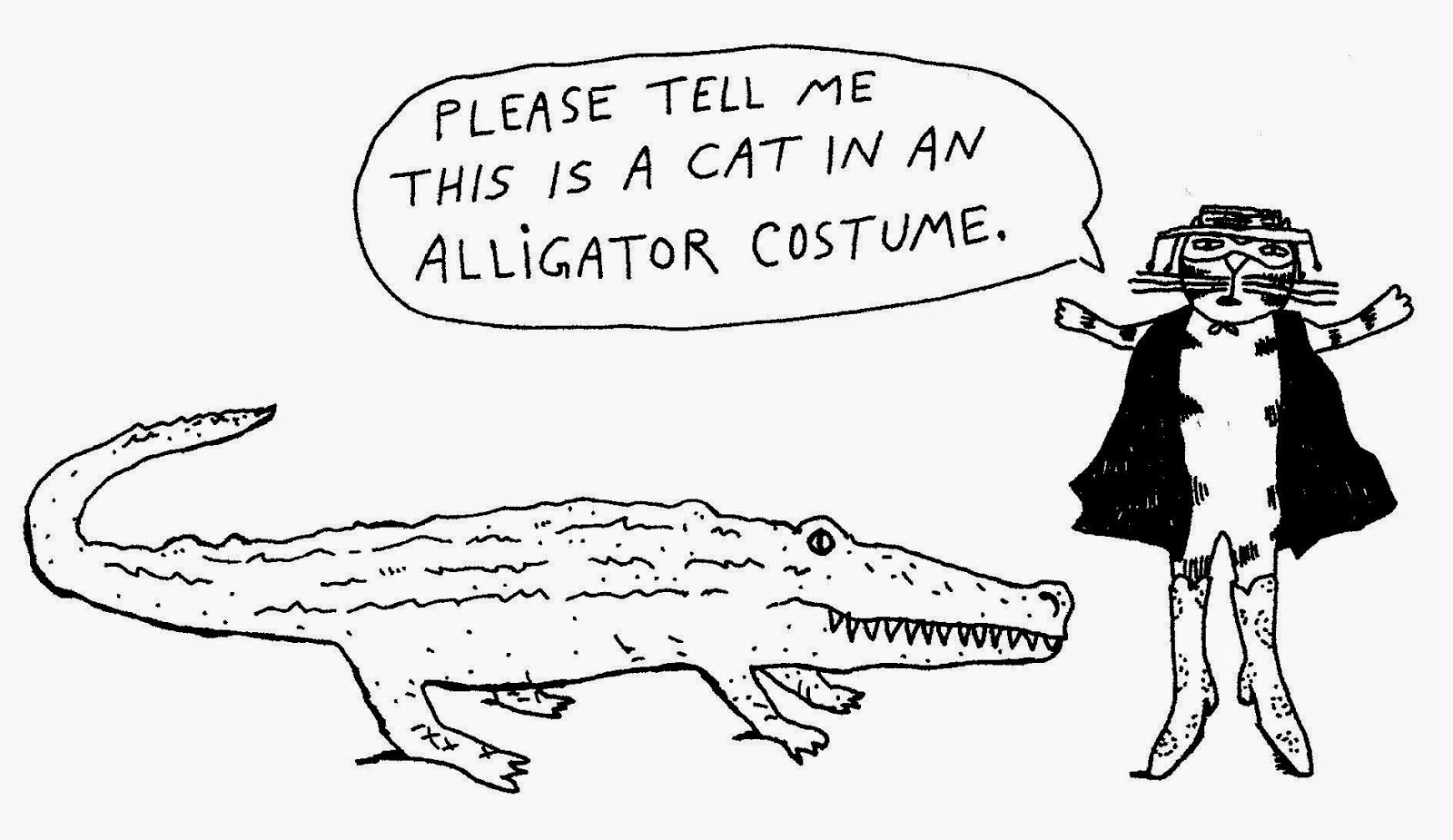 Hilarious scenes ensue that both children and adults will enjoy. Mr. Puffball rides in El Gato’s limousine equipped not only with cup holders and a mini fridge, but also a climbing wall and catnip. At a night out at the Brown Tabby, he eats fish tacos, plays with Wacky String, and meets Rosie, a (cute!) fellow Kung Fu Kitty.

Although the illustrations will draw readers in, the "a-hero-isn’t-always-who-he-appear-to-be" plot is clever and inspirational. Mr. Puffball’s adventure culminates at the opening night of Nine Lives. 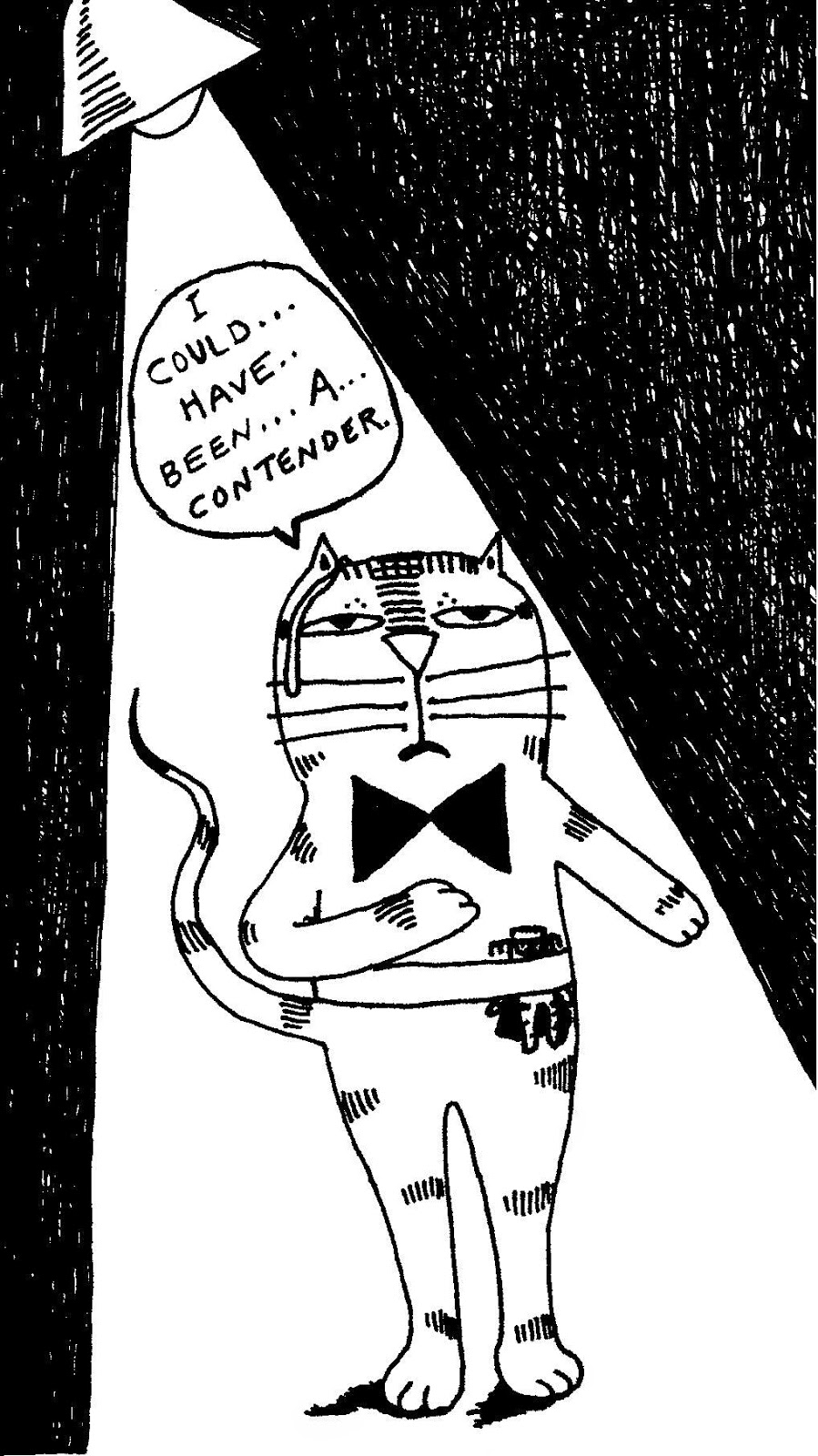 Constance finishes the story with a flourish, a flash-mob, and a glossary that made me laugh out loud. I can't wait for the sequel--fortunately, she is already working on it. Constance writes, “In the next two books, Mr. Puffball will continue pursuing his biggest dream: to be a movie star! Wherever he may travel, whatever television, modeling, stunt or corporate work he takes on, he always keeps his eyes on the Oscar!”

I don’t want to spoil this book for you. Let me suggest you catapult this book onto your “to be read list” and discover a catacophony of puns and a memorable story about a remarkable tabby cat. One way to support debut authors is by pre-ordering their books. I’m pre-ordering two copies of Mr. Puffball, one for each set of my grandkids. I bet you also know a girl or boy who would cheer Mr. Puffball on his journey to fame and fortune. 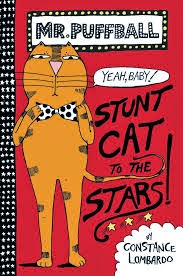 To enter to win an autographed copy of my well-loved ARC, please leave me a comment along with your email address if you’re new to my blog. Tag me on Twitter (cbaldwinCarol) or Facebook (Carol Federlin Baldwin) or become a new follower, and I’ll enter your name for each one. Random.org will pick a winner on May 7.
at May 04, 2015

As a fellow feline lover (actually, I confess to being part feline myself) I thoroughly enjoyed both the interview and the review!

I'd appreciate a chance to win this book and share it with fellow felines- er-lovers.

Thank you. And Congratulations Constance!!!

Thanks so much for the fabulous blog post!!! Good luck to all the humans who enter this momentous giveaway! I wouldn't even mind if a dog person won. much.

This looks like a really cute book! I'm excited to read it, Carol!

Carol,
I think my niece would love this one. It sounds so fun! I plan to link this on FB. Maybe others will enter that see it there. Thanks for the great review!

Thanks for this preview of a cute book. Cats make me sneeze but I don't think this book would. Please enter me for my grandkids' sake!

Thanks LInda, Vijaya, Linda A (your name goes in twice!), Dorothy & Joyce for entering. Mr. Puffball--it's been my pleasure!

This book sounds adorable. My granddaughter would love this. Thanks for telling me about it.

I can't wait to read this book! What a funny trick - to think of pets (or coworkers!) with thought bubbles above their head. Thanks Carol.

Agreed, Cindy. You're in!