Congratulations to Sheri Levy who won an autographed copy of "Mr. Puffball: Stunt Cat to the Stars." 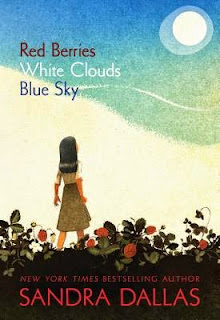 The year is 1942 and for 12-year-old Tomi Itano, a second-generation Japanese-American, life is about to change. Tomi loves everything about her home: the strawberries her father grows on their farm, her Girl Scout troop, her Japanese doll, which her grandparents sent her, and the American flag, which her father proudly salutes every day.

But amidst the paranoia of World War II, when Japanese newspapers and letters from home, are “proof” of being an enemy spy, the Itano’s become victims of fear, prejudice, and false accusations. Tomi’s father is arrested and taken to prison.  After President Roosevelt signs Executive Order 9066 ordering thousands of Japanese to be relocated, Mrs. Itano and her three children are taken to a series of interment camps. They finally are taken to Tall Grass, Colorado (a fictionalized camp based on Hamache) where they are forced to make a 16 x 20 square foot room their apartment.


Despite always worrying how Mr. Itano will find them, the family adjusts to camp life.  Although they don’t want to be there, the children gain friends and Mrs. Itano blossoms in her new role as a quilting teacher. Interactions with the local townspeople add more spice to the story. When Dennis, a boy Tomi meets, confronts her on being “un-American” because of how she looks, she retaliates in anger. Discovering he is the son of a German immigrant, she questions if everyone should be rounded up and shipped to a camp just because they all don’t look alike. His changed attitude towards the Japanese would be a great teaching point for teachers using this book in an upper elementary/middle school classroom.

When Mr. Itano is finally reunited with the family, he is a different man. Being unfairly imprisoned has left him bitter.  His love for the country he chose is replaced with anger and apathy. On top of that, his family has changed. His wife is no longer silent and submissive, his family doesn’t eat together, and his son wants to join the army. Unfortunately, his bitterness infects Tomi and her outlook changes also.  Not until Tomi writes a prize-winning essay on “Why I am an American” based on her father’s immigrant hopes and dreams, do her and her father’s attitudes change.

I was most captivated by Tomi’s mother. Faced with the challenges of being a mail-order bride, raising a family in a foreign country, being shuttled from one interment camp to another, and then a bumpy reunion with her husband who is unhappy with her Americanization—she showed the most endurance and strength.  Her authentic response to difficulties was the glue that kept her family together.

The book is recommended for reader ages 8 and up. I think that an 8-year-old would be too young to appreciate and learn from this story; I believe it is more suitable for boys and girls who are at least 10-year-old. Red Berries, White Clouds, Blue Sky is Sandra Dallas' second book about a terrible period in our nation’s history, and can be a valuable classroom supplement.  Jennifer Ikeda, the narrator of the audio book, did a good job creating the Japanese and American voices. 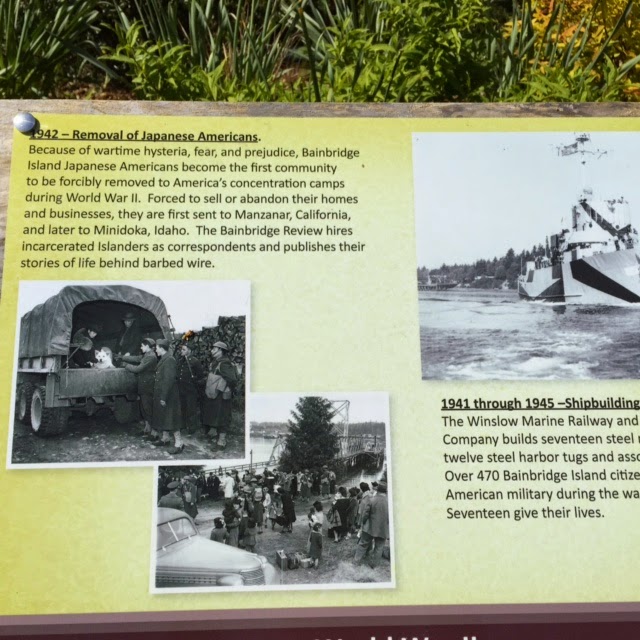 I took this picture on a recent trip to Bainbridge Island near Seattle Seattle. Then I found this on the same Wikipedia site where I found all of the black and white images.


By the way, the 442nd Infantry Regiment which Tomi's brother joined, was composed of almost entirely of Japanese Americans whose families were in interment camps. It was the most decorated unit for its size and length of service in the history of American warfare.

Thanks to the generosity of Recorded Books, I am able to offer this audiobook to a blog reader. Please leave me a comment by May 14 and I’ll enter your name in the giveaway. It will be a great addition to a school or homeschool library.

This book sounds fabulous. I don't know anyone in the recommended age group, so don't enter me in a giveaway, but honestly, the plot was very compelling to me.

This is such an important part of our history and your review suggests that Sandra has written a wonderful book!
Thanks for this giveaway.
Connie

This topic always interested me as we had an internment camp in southern Oregon where I grew up. I don't need the book but enjoyed the review.

Sign me up, Carol. I'd LOVE to win this!

Thanks friends, for your comments. I'll enter Joyce and Connie's name. Judy, if you want me to enter your name so you can donate it to a local school, just let me know.

I'm looking forward to reading this. Sounds wonderful. I'd love to win it.

Since we're transplants from WA, this is something we're more familiar with given the higher number of Japanese Americans in the Pacific NW. Most have a story.

Thanks for spotlighting this book, Carol. Would love to win a copy to read and share with our local school.

Thanks Deanna and Vijaya. Your names are in the "hat."

I hadn't heard of this book, but will definitely check it out. It sounds like an important one. Please let someone else win, though. I don't listen to audio books.

Thanks for taking the time to leave a comment, Rosi. YEs, since you hail from California, I think you would find this book very interesting.

Carol, thank you for introducing us to Sandra Dallas. Please enter me in the giveaway! Definitely a great way to supplement the history text books in school. This touches a place in my heart.

Kathleen, happy to see your name here. You're in!