Behind the Scenes with Monika Schroeder and an Autographed Book Giveaway

Congratulations to Sandra Warren who won my ARC of  BE LIGHT LIKE A BIRD. In this week's post, Monika Schroeder provides some behind the scenes information about writing her newest middle grade novel AND offers an autographed copy as a giveaway. 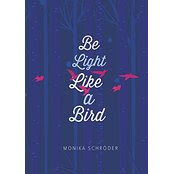 CAROL: I’m curious about the backstory behind this book. It’s very different than your previous books and I’m wondering how you got interested in the topic of landfills. Why Michigan? Do you have a personal connection to the area or the topic?

MONIKA: My husband is from Michigan and we inherited a cabin that his father built on an island in the Upper Peninsula. (We actually got married there.) Here is an excerpt of my answer regarding the setting I gave for an interview with School Library Journal:

"I often start a book with setting. The 'seed idea' for Be Light Like a Bird came to me the first time I saw a landfill. My husband and I had cleaned out the cabin my husband inherited from his father in Michigan's Upper Peninsula. I couldn't believe it when he drove all the stuff to a landfill nearby, a big hole where people bury unwanted items. In Germany we recycle or incinerate most of our garbage, so it left an impression on me when I saw a guy dropping a vacuum cleaner, a book shelf and an entire carpet into this landfill...a cemetery for junk.

I learned more about this landfill and read about the people in the community who had fought its expansion. Then I asked myself a "What if...?" question: What if there were a girl who loved birds and whose bird watching was threatened by the expansion of the landfill? Once I had that girl in my mind I found myself asking more and more about her life. How did she get to Michigan's Upper Peninsula? And why was birding so important to her? I learned that her father had recently died and that her mother had more or less dragged her up north. She was grieving and lonely and once she arrived in Upper Michigan she came up with a plan to make her mother stay. From there the story of Wren developed."

CAROL: How did you come across the turtle and Native American connection? I assume that is true? It definitely adds another dimension to the book.

MONIKA: In my research I found articles that mention the ceremonial use of turtle shell rattles among Chippewa Indians and several archaeological sites around the Great Lakes contained fragments of turtle shells. I did, however, not find any written evidence of the excavation of a Native American burial site on the Upper Peninsula with such rattles. I had read stories in the paper about constructions sites for road building in the area having to be stopped after possible Native artifacts or remains were found.

I called the former head of the Sault Tribe Office of Cultural Repatriation in Sault Ste. Marie, MI and asked him about the shell. He said in our phone conversation that turtle rattles were used for many purposes but they also were burial gifts and under the right soil conditions they could survive and be found.

The article the librarian finds and uses in the council meeting remains fictional, but I think that is okay, given the possibility of such findings.
******


If you haven't already, you can read my review of Be Light Like a Bird on last week's blog. Plus, Monika is generously giving away an autographed copy; leave me a comment by October 20 for a chance to win. If you are new to this blog or share this on social media, I'll enter your name twice. Please, let me know what you do and leave your email address if I don't have it.

I had the pleasure of meeting Monika this past weekend at the Southern Festival of Books and hearing about her writing process and inspiration. I'm so excited to read this story! (I already have a copy so please don't enter me in the contest.) Thank you for this behind the scenes look at Schroder's compelling story! - Karen Harrington

Learning the back story has peaked my interest, especially the Michigan connection, since I am a Michigander by birth. I can't wait to receive my copy.

thanks Sandra and Karen. Sandra, your book is in the mail! And thanks for sharing on FB, Karen!

Thanks, Carol. It's always interesting to hear the behind the scenes stories of authors we know! Congratulations, Monika, on a great story.

Now I want to see a wedding picture! Great backstory, Monica. And I've always been impressed with the recycling in Germany.

Thanks for commenting, Linda and Vijaya. You're both in this giveaway!

Great interview, ladies. I'm with Vijaya. I want to see a wedding picture too.

I've been recycling whatever I can for over twenty years, and doing everything I can to reduce my carbon footprint. Love the U.P. and Native Indian creation myths. Yes, I'd love to win a copy of Monika's book. Tweeting this now, Carol!

Thanks, Linda A. You're in! And you too, Clara--twice!

I'm intrigued! The back story has me curious and I can't wait to read the book especially since we toured the UP while our daughter lived there.

Thank you all for your comments and Carol for giving me the opportunity to talk about the backstory on her blog. The wedding photo is actually on my website. www.monikaschroeder.com If you go to the "About Me" link and scroll down you'll find it among the pictures. It was a VERY small wedding. A friend had come to be my bridesmaid and my father-in-law was the 'best man.' The only other people present were the captain of the ship and his wife. It rained, which according to lore is a good sign. :)

Thanks Gretchen and Monika. You're in the giveaway, Gretchen, and I'll check out the wedding picture!

Monika's book sounds intriguing. With my love of the outdoors and birds, I know I'll relish it. After hearing more about its inspiration and story line, I'm sure every reader will enjoy it. Thanks, Carol, for featuring Monika.

You will love this book, Bonnie. Entering you twice since you shared on Facebook.

Thanks for this interesting interview. I really hope to read this book soon, but please let someone else win. Still buried in books.

The book does sound very interesting. It is amazing how we come up with our book ideas. Congratulations on your book's publication, Monika. I look forward to reading it as well. Sarah

thanks, Sarah, you're in. And Rosi, I hope you get to read this at some point

I respect Germans for their attention to the environment and can imagine the shock of seeing vacuum cleaners and bookshelves dropped into the ground! It really is a bizarre concept and I love it that junk could inspire a beautiful story! Thanks for sharing, Monika and Carol.

I find this very interesting. My Kentucky county used to have unwanted items in various dumps along our roads but, thankfully,this has ceased. We do have a landfill and we also have county wide garbage pickup and disposal.
This sounds like a great read. Thanks for a chance to win!
Connie
cps1950(at)gmail(dot)com

Thanks for stopping by, Kathleen!