AIM: A Review, an ARC Giveaway, and The Hero's Journey

What do you do if you write a book based on a story in "your own backyard" because of an editor's advice (BLUE, Boyds Mills Press, 2006.  The polio epidemic in Hickory, NC) and then the main character keeps talking to you and you want to know what happens next? (COMFORT Calkins Creek, 2009. Anne Fay deals with the effects of polio and her father's return from WWII.)

If your name is Joyce Hostetter and these first two books are award winners, your publisher then asks you to write a prequel to these books starting with the letter "A." And if you're as great a writer as Joyce is, then you imagine the world before BLUE and write Junior Bledsoe's story and name it AIM. 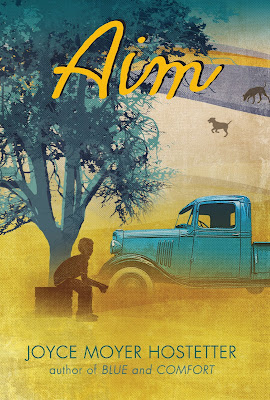 I've been privileged to be a part of AIM's development from the time that Joyce asked her Facebook friends for suggestions on a book title beginning with "A." (I think she might have already had a title in mind, but it was fun hearing everyone's thoughts.) She bounced story ideas off of me and I read several drafts. Since I have learned so much from Joyce ("less is more when crafting dialogue, internalization and action"); I was honored that Joyce incorporated some of my suggestions into her book.

As I've done previously, this review uses craft principles I've learned from another writer. This time, I'm drawing from Jillian Sullivan's presentation of The Hero's Journey at Highlights Summer Camp.

Hand me that wrench," Pop wiggled his grease-covered fingers.

In less than 50 words Joyce brings the reader into the world of Junior Bledsoe: a world full of unmet desires and tension. In this powerful first chapter, many of Junior's conflicts are foreshadowed. At fourteen, he longs to show his father what he is capable of doing, ("Sometimes I wondered if I'd ever get to show him what I could do."); feels the sting of not being as close to him as Ann Fay is with her father who "go together like biscuits and gravy"; reads in the paper about America preparing to go to war; and hears his father poke fun of him for wanting to stay in school. "After the first day, quit. Least you can say you went to high school."

His father's last words as he drives off in the car come back to haunt Junior later:

"Find yourself a job and take care of your momma." He climbed in the car. "I'll be back before you can say, 'Yankee Doodle Dandy.'" Then he drove off and left me to put the tools away.

Jillian Sullivan talked about the reluctant hero--the character who is forced on a journey when one way of life ends and another begins. This is an appropriate description of Junior. AIM narrates the grief and anger-filled year of his life when he searches to find out who he is and where he is headed.

"Choices are made when the character must decide what he will give up in order to move on," Jillian said. "Each of these decisions and choices represents a death to self so that by the end, the character must overcome his ego to make a courageous decision."

For Junior Bledsoe, choices assault him on a variety of levels. How he will respond to sharing his bedroom with his cantankerous grandfather? What will he do when faced with the temptation to skip school or steal a car? What will he have to give up to earn self-respect? Can he be different than the generations of men who've gone before him?

Jillian said that heroes often cross several thresholds as they overcome trials, confront their own egos, and ultimately make a courageous decision. In this beautiful coming of age story, there is one scene in AIM that I will never forget. In a moment of introspection, Junior crosses one of these mini-thresholds. He has just tried working at the cotton mill and found it much harder than he'd imagined. He comes home and pulls off his shoes and socks because he wants to feel dirt on the bottom of his feet.


Eleanor was already bawling and I knew there was gardening to do. There wouldn't be time for going into the woods. I tended the animals, and on the way back to the house I plopped myself down onto a sweet potato crate under Pop's oak tree. I hadn't managed to rake up the acorns last fall, and one of them had sprouted into a small tree not four feet away.

It was only six inches high, but it had four perfect leaves and was doing its best to become a real tree. Any other time I would've pulled up a sprout like that. Today, though, I didn't have the heart to destroy it. After all, what if the big oak tree was hit by lightening one day? The seedling would be there to replace it. (p. 239)

Even now, I get teary-eyed over that marvelous piece of introspection and characterization.

What are you waiting for?

For fans of BLUE and COMFORT, you will be amazed at how AIM's ending is a perfect set-up for BLUE. On the page it appears effortless. But here's a secret: Joyce wrote that chapter first. It gave her a powerful starting point in her mind. From there she created the wonderful story of a boy named Junior Bledsoe, who spends the year after his father's death learning what to aim for.

If you haven't read BLUE and COMFORT, what are you waiting for? AIM's (Calkins Creek, 2016) pub date is TOMORROW and you can order it here or here. You can download an educators guide for all three books here.

********
Last February I shared Joyce's cover reveal and began the giveaway for this ARC. I will add your name to the list of those vying to get their hands on this book if you leave a comment along with your email address, if I don't have it. I already have a long list of contenders, but there's good news--I have TWO ARCs to give away! I'll pick the winners on October 6.

This review was originally published on LitChat.
at October 03, 2016

I submitted several entries in February and I am still eager to read this story! Thanks for sharing!
Connie
cps1950(at)gmail(dot)com

Yes, Connie. I have you down for three entries. Thanks

Once again, Carol, you've done a masterful job of sharing a story by slipping in craft in a very interesting way while at the same time enticing readers to run out and buy the book...no...buy three books!

I look forward to reading ALL of these.

Congratulations to Joyce and to you for another super post.

Thank you, Sandra. Guess it's the teacher in me. You are in twice because you commented in February.

Joyce is a talented writer. I look forward to reading AIM. I have read BLUE and COMFORT. Thank you, Carol for entering my name for a chance to win a copy of AIM.

Happy to add your name to this list, Gail. You will LOVE AIM! It's so beautiful

Please put my name in the hat Carol. Hah! I like the whole ABC thing too :) I love how you always teach with examples. And that's a beautiful picture of the two of you together.

Thanks, Vijaya. You're in!

Please add my name to the list! My niece shares my love of Joyce's books and it would be wonderful to surprise her with a copy!

happy to add your name, Heather. Please leave your email address in case you win!

Hi Carol! What a marvelous post! You and Joyce make such a great team! I LOVED Comfort and Blue! And October 6 is my birthday! Perhaps that will be my lucky day and a copy of Aim will come my way!🎂

Kristi, I'm happy to enter your name but I need your email address in case you win. That would be a wonderful birthday present!

Thanks for the giveaway too.
Linda

Thanks to each of you for dropping by. And if you don't win one of the ARCs please note that I am giving away 10 copies of AIM at my blog.So you can drop by there next!

Thanks so very much, Carol for writing such a beautiful review and analysis! You do me proud!

You're so sweet, Joyce. I owe you a lot!!! SO happy to help you celebrate AIM's birthday!

Nice post. Love the breakdown on the hero cycle. No need to enter me in the drawing. I've read and greatly enjoyed Aim already.

I loved HAWAIIAN STORY and cried through BLUE. I'm a huge fan of Joyce's work and recommend her often.

I cried through BLUE and COMFORT too Christine. YOu'll love AIM. Thanks for sharing on FB too.

A very touching and insightful post about the writing of AIM. Wonderful metaphor of the oak trees that shows Junior's growth and transformation. Congratulations to JOYCE on her new book!

Would love to read AIM. I also remember when Joyce asked for titles with the letter A. She captures character and angst beautifully. Please enter my name for an ARC.

Yes, she does, Deborah! Your name is now in twice, Deborah. You left a comment back in February also. You'll love AIM!

This looks a wonderful book, Carol.I look forward to reading it.And I enjoyed your review, too. Thanks.

Congratulations on publishing another novel Joyce! I was already excited to read Aim, but am even more so after reading Carol's insightful review. I look forward to getting to re-visit the world of Blue and Comfort. I always recommend Joyce's books to kids who enjoy realistic historical fiction. Congrats to those who won the giveaway! :)

Thanks, Anna. You'll enjoy seeing what happens before BLUE!

I appreciate you spotlighting more of Joyce Hostetter's books, and this one sounds absolutely fantastic! The scene you excerpted is indeed an impactful one, and I appreciated your insight about the writing process as well. Thanks so much for the great post, Carol!

Thank you so much! Joyce's books are wonderful.

Thanks for featuring another one of Joyce Hostetter's books on MMGM. I'd enjoy reading this series, but right now I'm overwhelmed with my stack of future reads. I'll put in on my list and hope to find the time possibly next Summer.

I must read a Hostetter book! AIM really sounds like an engaging novel. Carol, your review is very thorough and full of insight. Love historical fiction. Thank you for going into more depth in this review.

Yes, Patricia. these are excellent!! Start with AIM !

There are so many WWII homefront books, and my students invariably want ones set on the battlefield instead. Thanks for a great review; I had forgotten about this series!

Glad to remind you of Joyce's books!

Thanks for stopping by Greg. I can't imagine the stack of books you have--hopefully you'll add the Baker Mountain Series to that stack!

Nice to see this review again. It's good to see the word being spread. Merry Christmas to you, Carol.