MADE YOU UP- A Review and an Audio CD Giveaway

Francesca Zappia tackles the difficult subject of schizophrenia in this young adult book, MADE YOU UP. Told from Alex, the 17-year-old’s deep point of view, the reader is brought so completely into her thoughts and emotions that occasionally you can’t figure out what is real and what isn’t—which is exactly Alex’s problem. She uses a camera to record what she sees to help her figure out  what if something is real or a delusion. 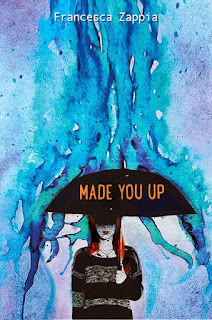 Alex has started in a new school in her senior year because of problems in her previous school. The reader doesn’t find out until ¾ of the way through what these problems were—all we know is that Alex desperately doesn’t want students in her new school to discover her diagnosis, she wants to be perceived as normal and not crazy, and she wants to get into college. (Note to self and other writers: backstory doesn’t need to be spelled out in the beginning. Just enough details to make the story plausible.) Because of last year’s issues, she’s has to provide service hours in a committee led by Miles, a senior she thinks she met as a nine-year-old. Since she had believed their encounter was a delusion, it takes her awhile to realize he is the same boy. Their love/hate relationship serve each other’s needs as they both tackle the specter and stigma of craziness in their lives.

The book is masterfully written, interweaving Alex’s delusions with real events and characters. But although it’s clear that the phoenix Alex imagines is not real, it’s a surprise to find out that a significant secondary character lives in her imagination and died several year ago. Another time she dismisses the appearance of a boa constrictor as a delusion, but is startled to discover that it is real. (Which is a great way for the author to demonstrate that her delusional fears about Nazi spies are nothing compared to the reality of a snake almost killing her.) The fact that Alex figures out a complicated school mystery is a testimony to her intelligence and persistence.

I would give this book five stars except for the language and sexual content. I know I represent a small minority in this regard and that MADE YOU UP probably reflects how many high school students talk and act, but I don’t agree that authors should feed that system. This could have been an equally powerful book with toned down language and without the sexual references. That being said, teen readers who choose to read this book will get an intimate view of mental illness including psychotic episodes, hallucinations, and paranoia.

In the end, Alex forgoes graduation—what she really wanted—and signs herself into a mental health hospital. Although I was sad not to see her obtain her goals, I was glad to see her face her fears and take control of her life by getting the help she needed. As she and Miles agree in the end, “The real thing is always better.”

The narrator, Amanda Ronconi, read the book clearly and I had no difficulty following her rendition. Here is a link to an audio snippet of the book. I am giving away the audio CD courtesy of Tantor Media. Leave me a comment by July 14 for a chance to win.

My, what a difficult subject to write realistically about. It sounds like a book I really would like to read. I hope I can find time soon. I don't usually listen to audio books, but maybe an audio book would be the ticket to finding time. Then I can listen in the car. Thanks for telling me about this book and for the chance to win.

I’m fascinated by the mind and would absolutely love to read this book. It’s definitely my cup of tea. I’m not much on listening to books, but I think this one would work for me. Yup, I’d love a chance to win. Thank you, Carol.

Carol, thank you for our review and introducing me to MADE YOU UP. Such an important topic that is not often written about and is needed. Audio books are the perfect thing to do with my pain flare ups, easier to listen when I can't focus on reading :)

Thank you Rosi, Clara, and Kathleen. This is a compelling book and each one of you would appreciate the writing and the story.

Thanks for reviewing this book, Carol. I'm so glad to see Schizophrenia being dealt with in a YA novel. The disease is typically diagnosed in late teens, and research shows that the earlier there is treatment after the initial event, the greater likelihood of success. And, bringing it out in the open helps fight the stigma and is so supportive to those who have been diagnosed.