The Wolf's Boy: A Review and Autographed Giveaway

Congratulations to Kathleen Burkinshaw who won the Audio CD, MADE YOU UP.

A very long time ago, a baby boy is born with a withered foot. His father, obeying the rules of his people, leaves him out in the open, presumably to die. A mother wolf adopts him and treats him like one of her own pups. One night the boy’s mother hears a human cry mixed in with the cry of the wolves. With great longing for her child, she rescues him. In this way, Kai—or Wolfboy as the village boys eventually call him—begins his difficult, pain-filled life. 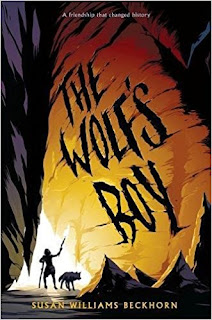 The author of THE WOLF’S BOY, (Disney Hyperion, 2016)  Susan Williams Beckhorn, reached out to me after reading my post on Kirby Larson’s blog. Her description of her book, “a ‘first dog’ story inspired by the 1994 finding of the fossilized footprints of a boy and a canine walking side by side in Chauvet Cave in France” intrigued me. Although Susan and I probably disagree about the Biblical view of creation and evolution, I found this middle grade book for boys and girls to be well-written with many layers built into it.

Interesting enough, Beckhorn incorporated a fictional creator/supreme being, Tal, into the story. At the story’s outset Kai observes that, “Tal gives two arms, legs, eyes, ears. If one is hurt, the other grows stronger. Maybe Tal is trying to make me stronger.” (p. 37) This not only reflects that a belief in a supreme being is common among cultures (Romans 1:20, Acts 18: 22-31) and that difficulties and trials are for our good (James 1:2-4, Romans 5:3-5), but also foreshadows Kai’s journey.

Despite his father’s reservations and his brother’s contempt, Kai gets to keep a wolf pup he rescues. This pivotal point is shown here:

I carried the pup back to my bed. The little wolf nestled against me. She stretched out a foot, bumping my nose. I ran a finger over her muzzle. It was shorter than most. Her little skull seemed rounder too. “Will you be one of the People?” I whisper to her. “Or should I be one of the innos with you?” (p. 49)

The friendship between Kai and his wolf who he names, Uff, grows as they do everything together: sleep, eat, play, and hunt small game and fish. Uff accepts Kai and his lame foot as normal; he doesn’t treat him as cursed (tabat) as the other members of the community do. “You don’t hate me for my bad foot,” I put my forehead against hers. “You are my friend.” (p. 70)

Since he is tabat, Kai may not touch a weapon and therefore is not trained to be a blood hunter like other boys. As his brother and peers shame him he contemplates running away, with the realization that he’ll have to be able to hunt large animals in order to survive. "There must be a place in the world for us.” Kai thinks. (p. 83)

The shaman, both revered and feared within the community, is also disfigured. When he tells Kai that he has powers, Kai is puzzled. In another pivotal moment on Kai’s journey the shaman tells him, “You are strange like me. You are other.” (p. 86)

Without including too many spoilers, Kai risks physical dangers and estrangement from his family and community, and leaves home. His survival journey is a great metaphor for his development as a young man in this unique coming of age story. Kai faces his fear of death, of losing Uff, and of being struck down because he has gone against the rules of the community by creating his own weapon. After his last test he realizes, “I was still myself--Kai, yet I was someone new.” (p. 215)

In the classroom, teachers can use this book to discuss disabilities, friendship, bullying, risk-taking, and survival. If I were a teacher I would latch onto the shaman’s description of other and ask students if they ever felt that way or treated someone else like that. Here is a link to discussion questions.

I am giving away my autographed hardcover copy of this book. Please leave a comment by July 20 for your chance to win it. Share this on social media or start following my blog (be sure to let me know what you did and leave me your email address if you are new) and I’ll enter your name twice.

By the way, if you are interested in a Biblical view of the world’s age, here is a link to Answers in Genesis.

This book sounds very intriguing. Although I do believe in God's Creation, I do think that this book could be a valuable resource to emphasize that all of us are different in some aspects and we must not judge others by their defects or inabilities.
Carol, I shared on Twitter and I follow you.
Connie
cps1950(at)gmail(dot)com

I agree, Connie. Your name starts the list and you're in twice. Thanks for following my blog and sharing on twitter!

Thanks for an interesting review of what sounds like a very interesting book. I think a lot of boys will really love this one. Please let someone else win. I am still buried in books and behind on my reviews.

When your TBR pile goes down, Rosi, I think you'd like this book!

Thanks, Joyce. I believe your grandkids would enjoy this book. It would lead to lots of conversations!