Just Fly Away: An Audio CD Review and Giveaway

Congratulations to Connie Saunders who won THE WOLF'S BOY.

Please note that since this is a review of an audio CD, the following quotes might not be exactly correct; I did my best to capture the words.

What do you do if you find out that your father had an affair eight years ago and you have a half-brother you never knew about? 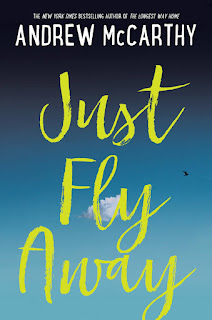 That is fifteen-year-old Lucy Willows' problem and the crux of JUST FLY AWAY (Algonquin, 2017), the debut YA book by actor Andrew McCarthy. When her father discloses the information to her and her sister Julie, Lucy is furious. How could her mother continue living with him? How can anything ever be normal again? How could he have lied to them--pretending they were a perfectly regular family--all this time? Lucy begins a quest to find her brother Thomas. In her suburban New Jersey town this proves to be pretty easy--he lives within biking distance of her home.

Soon after Lucy finds out about Thomas, she "falls in love" with her best friend's brother, Simon. In Save-the-Cat language, Simon provides the B-story; the love interest who supposedly provides some nuggets of truth. To be honest, as a secondary character, Simon fell flat for me. Although Lucy is crazy about the way he looks and how he kisses, until the end of the book Simon doesn't do a whole lot to warrants her effusive affection. When Lucy tells Simon how angry she is about Thomas, Simon remarks, "It's not his fault you know." True, but not an earth shattering revelation.

In my opinion, the book bogs down in the middle. There were too many scenes that didn't show more than two teenagers smoking dope and kissing. I kept waiting for more to happen. The book became more interesting when Lucy impulsively decides to run away from home and take a bus to her grandfather's house in Maine; although I wasn't convinced that this type of impulsive behavior was built into her character. In fact, it's not until she happens to see a poster of Maine that she makes this decision and throughout the journey shows little emotional reaction to leaving home. The bus ride had some interesting moments but felt drawn out.

I love generational stories so I found Lucy's interaction with her grandfather to be the best part of the book. As they walk along the rocks near the coast, Lucy dares to ask him why he is estranged from his son. His answers helps her to understand that her grandfather wrongly took his anger out on her father. Her grandfather remarks, "We see them [people] the way we see them. Other people may see them a different way...We never see our parents as just people. They're our parents. And that ought to be enough for them. But it's not enough."

The walk along the breakwater is the most suspenseful part of the book. Although the walk ends in tragedy, it ultimately leads to more risk-taking and honesty between Lucy and her father.

In the car back in New Jersey, Lucy asks her father,

“I guess you can never really know everything about a person, can you?”

"The best we can try and do is let another person know who we truly are. To let them see us. That is, if we love them and trust them enough. And to do that, we have to reveal ourselves to the other person.”

Her father admits that he covered up the affair because he didn't want to be seen in a bad light. Lucy babysits for Thomas and while at their house picks up a book that had been her favorite as a child. In it a Japanese farmer wisely looks at several different events from both a positive and negative point of view. At which point Lucy concludes that maybe it's not so bad having a little brother after all- a satisfying ending.

This book could be used as a conversation starter for a teen who has gone through an event such as this or is just having trouble talking with her parent.

I am giving away the audio CD, courtesy of Recorded Books. Leave me a comment by July 28 to be entered in the giveaway. Make sure you leave me your email address if I don't have it.

Dear Carol,
Thank you for reviewing Just Fly Away. Sometimes we have all wished a sibling would just fly away and leave us alone.

I appreciate your looking out for great books to share with us. It sounds like Andrew McCarthy did a great job with his book.

Having an audio CD of a book is quite a gift for the readers who want to experience and appreciate the words orally.

I hope you and Andrew both do something fun to celebrate the great people you are.

I appreciate your thoughtful analysis of book after book or audio CD in this case. You've helped enrich all of our lives by exposing us to new and different books to read and recommend to young readers; a gift for us as readers as well as a gift to the author.

Thanks, Sandra. Critiquing books has helped me in my own writing! Your name is in the hat!