REFUGEE- A Review and Giveaway- Part I

This is a busy week on my blog. TWO giveaways running concurrently!

WARNING: Reading this book will make you stay up late and the characters will haunt you long after you finish reading it. 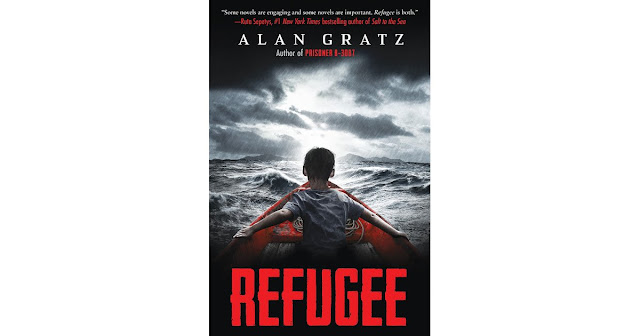 Readers of my blog are no strangers to Alan Gratz's books. You're a click away from seeing what I thought of Prisoner B-3087, The League of Seven, and Samurai Shortstop. And believe it or not, I still have Dragon Lantern on my TBR shelf. It's no use. I can't keep up with this t-shirt and jeans-always-in-a-hat favorite of SCBWI-Carolinas and now a NY Times Bestselling author!

It's difficult to know how to review a book that takes the lives of three young people from three different periods of time, who are escaping from atrocities in three different countries and weaves them into one volume. Each chapter tells a different part of each refugee's story and each (see warning above) ends in a cliff-hanger. Masterfully written and entwined together, the reader never loses track of who is speaking and the events that character faces.

In 1938, Josef Landau is a twelve-year-old German Jew who's family barely escapes the concentration camp. In 1994, Isabel Fernandez is an eleven-year-old who is hungry, musical, and afraid.  Castro has been making life difficult for her and her fellow Cubans for years. In 2015, Mahmoud Bishara is a twelve-year-old stocky Syrian who prefers to stay invisible so that he can survive artillery shells and bombs.

Although they are worlds and cultures apart, their stories intermingle. Their stories include broken glass, threatening soldiers, harrowing escapes, unbelievable obstacles, bodies of water which swallow family members, music, close-knit family ties, and heroism on each character's part.

Here are a few bits and pieces to entice you to read this book:

After Mahmoud's apartment building is bombed and crumbles his father says, "We should have gone long ago. Ready or not, if we want to live, we have to leave Syria." (p. 55)

This scene takes place soon after Isabel's family escapes to Florida in a makeshift boat their neighbors built.


They [the fathers] kept arguing, but the engine and the slap of the boat against the saves drowned their words out for Isabel. She wasn't paying any attention anyway. All she could think about was the ninety miles they still had to go, and the water pouring in from the gunshot hole in the side of the boat. (p. 65)

Josef turns 13 onboard the MS St. Louis. Like other Jewish boys, it is time for him to have his bar Mitzvah, which the men on board arrange. His father, who was tormented in Dachau, refuses to attend believing that the Nazis will snatch him away.  Here is Josef in this sad yet foreshadowing scene:


Josef felt like someone had yanked his heart from his chest. In all the times he'd dreamed of this day, his father had always been there to recite a blessing with him. But maybe this is what becoming a man is, Josef thought. Maybe becoming a man means not relying on your father anymore. (p. 75)

While Mahmoud's family meets one obstacle after another as they seek to get to Germany, they meet a Palestinian refugee who left his home in 1948 during the first Arab-Israeli war. Since I was listening to Blood Brothers, the story of the displaced Palestinians (to be reviewed and given away soon)--this man's help to the Bishara family added another dimension to the history and plight of refugees.

On their cobbled-together boat Isabel thinks about her beloved music.


This journey was a song, Isabel realized, a son cubano, and each part of it was a verse. The first verse had been the riot: a blast of trumpets, the rat-a-tat-tat of a snare drum. Then the pre-chorus of trading her trumpet for gasoline--the piano that gave the son its rhythm--and then the chorus itself: leaving home. They were still leaving home, still hadn't gotten to where they were going. They would return to the chorus again and again before they were done. (p.155-6)


Floating on a dinghy in the Mediterranean Sea with his mother, Mahmoud is hoping to be rescued. In the dark he hears a boat, but can't see it.


But the sound of the motor stills stayed frustratingly, agonizingly, far away. If only whoever was on the boat could see him, Mahmoud thought. All his life he'd practiced being hidden. Unnoticed.  Now, at last, when he most needed to be seen, he was truly invisible. (p.192)

Josef contemplates joining nine other men who plan to storm the bridge of the St. Louis and demand that the ship be run aground in America instead of being returned to Germany. As much as he wishes he could return to childhood he thinks,

But he wasn't a kid anymore. He had responsibilities. Like keeping his sister and his mother safe. Papa had told him what the concentration camps were like. He couldn't let that happen to Ruthie and his mother. (p. 253)

Alan expertly wraps up the three refugee's stories in an unexpected ending. This is a timely book that both adults and readers from ages 12 and up will enjoy; it is also be a tremendous curriculum resource.

I am giving away a copy of REFUGEE in conjunction with the fall issue of Talking Story. Leave a comment here to enter once. Leave a comment through Talking Story and you'll have another chance! Come back next week for a look behind the scenes of writing REFUGEE. You'll have another chance to win the book! Giveaway ends September 28.
at September 20, 2017

This sounds like a fascinating and very relevant story. Thanks for sharing.
Connie
cps1950(at)gmail(dot)com

Wow Wow Wow! This sounds like a fabulous read! One that would circulate quickly through our school library. Please count me in for the giveaway! Thanks!

Thanks Connie and Jilanne. You're both in!

Wow is right! I can't wait to read it- Wonderful review-- Thanks, Carol.

Thanks, Sheri. You're in-- you'll love this book!

"Refugee" has become a must-read. The imagination and talent it must require for a skillful intertwining of stories makes me need to see how it's done.

Betty, I hope you read this book. So well written with captivating characters.

This sounds like an amazing book. I think it's also an important book my grandkids should read. Thanks for the post.

He's a guy-in-a-hat favorite of mine, too! Thanks for this review, Carol! I can't wait to read this. Traversing these time periods, revealing these personal stories and their interconnections requires a master! Alan is all that!

Yes, Ann, he is a master! And Rosi, you would REALLY like this book! Thanks both of you for leaving comments.

Thanks for the review. This is now on my "must read" list.

Thanks, Lois. I need your email address to enter your name into this giveaway!

I want to know more about this blog. thank you, terri

Terri, thanks for your comment. I need your email address to enter you in the giveaway.

Perhaps I missed it, but what age range is Refugee intended for? It sounds like it could be intense. What a great base for a class discussion.

Wonderful review, Carol. I cannot wait to read this! So excited for Alan! A very cool trailer for REFUGEE as well.

I’m late just wanted you to know I appreciste your sharing Alan’s intriguing characters from Refugee. He really knows how to get our hearts and keep them.


Enjoy being yourselves! You and Alan are amazing.