I first "met" Debbie Levy through the pages of her novel-in-verse, This Promise of Change. In her newest book, Photo Ark ABC, Debbie  uses more than five different types of poems to playfully describe animals from Aardvarks to Zebra Finches. The accompanying photographs by National Geographic's Joel Sartore are outstanding, cute, and engaging. Children from ages 5-8 will "get" Photo Ark's message of protecting animals and their environment in a beautiful and fun manner. 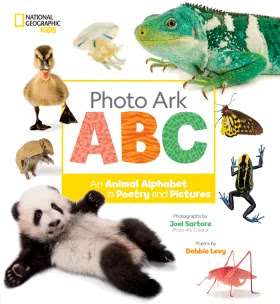 The book opens with an overview of all the animals featured in the book. Here is the first stanza:

Hi, Armadillo,
Greetings! Grizzly Bear!
In a poem you are neighbors
In the wild, you're not a pair.

From there, Debbie takes a unique look at A, for Armadillo. 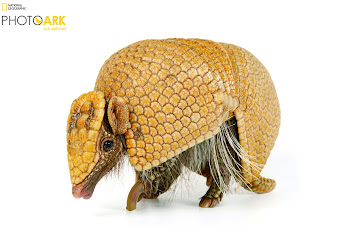 This is the last portion of the poem; unfortunately I can't show you how the words are positioned to highlight the physical features of the animal. But the words dance on the page!

The only mammal with a shell
Can barely see but sure can smell
A sniff will tell if danger's near
And if its time to disappear...
To once again
become a pillow
Stoney, scone-y
Armadillo.

The next two spreads compare bears with butterflies- through the photos and words. I wouldn't have have thought of pairing them together, but think about it... They both feast, sleep, and creep!

Hey, little duckling
What did you do?
What's that drop
I see behind you?
Aw, little mallard
That's part of life too-
It's not just a Duck thing
It's what we all do!

The second stanza of this poem reads,

Neither emerald nor moonstone,
not mineral, but fauna,
This gem has a backbone
This gem is Iguana.

No lungs, no nose, no ears, no eyes
No brain to make a jelly wise.
No tongues, no toes, not even hearts
Nope. Jellyfish don't need those parts.

There once was a Yabby down under
Who thought he could vanquish the thunder
With claws he went THWACK
At each BOOM and each CRACK
But could not tear thunder asunder.

This great STEM book will make a wonderful addition to a little one's library, or to the pre-school through second grade curriculum.

CAROL: How did you come up with the idea for this book?

DEBBIE: I didn’t come up with the idea, the people at National Geographic did! A few years ago they’d published Animal Ark, which paired the amazing photos of Joel Sartore with poetic text by Kwame Alexander. Now the idea was to feature another batch of Joel’s photos (of which there are thousands) in an ABC book—from A for armadillo to Z for zebra (and zebra finch!), with a separate poem for each animal. They wanted the poems to be fun and to encourage young people to care about the animals. I was thrilled to have the opportunity.

CAROL: Were the poems difficult to write?

DEBBIE: The poems really were a joy to write. I wanted to include different types of poetry, as an homage to the diversity of species but also to add texture to the book. So there are rhyming forms and free verse and more formal structures, too. (These are all identified in my author’s note in the back matter.) You ask how difficult the poems were to write; if writing’s not at least a little difficult, I’m not sure it’s any fun! Some were more of a challenge than others, but by learning about the different species and subspecies pictured in the book, playing around with forms and words, thinking about what might bring a smile or spark curiosity in the reader’s mind, and meditating on Joel’s images, I composed the poems from A to Z!

GIVEAWAY
To enter this giveaway, please leave your name and email address in the comments. If you are reluctant to leave your email address, you can email me at cbaldwin6@me.com. If you are educator or librarian (including home educators!) tell me where you work and I'll put your name in twice. Giveaway ends Saturday, January 22 at 6 PM.

Congratulations to Lauris Burns who won the much-in-demand book, AIR by Monica Roe.

I am working on science-based rhyming picture book myself and would love to read this book as mentor text. Nature is my favorite subject to read about, study, and write.

This is a great idea! I'd love to read this book. Thank you, Terri

Thank you Terri and Danielle. Your names start the list!

Hi Carol, my granddaughter is an animal lover, so this would be a perfect book to share with her. Thanks for a great review!
Connie
cps1950(at)gmail(dot)com

What a great interview and fun sounding book! My nature-loving five year old would adore this. :-)

Please leave your name and email address-- you are coming up as "unknown". I'd love to enter you in the giveaway!

Happy to add your name, Connie!

It’s Monica, Carol—I’ve no idea why I came up as unknown!

Thanks, M0nica, for identifying yourself! going forward, just leave your name too so I know it's you. Since you're a home educator, your name goins in twice!

The photos and poems are wonderful! I'd love to win a copy.

Good morning, Carol!
Wow, this picture/poem book looks and sound AMAZING!
Will you PLEASE enter my name for the GiveAway?
Thanks!
Gail Hurlburt

So glad you left a comment for this fabulous book. Your name goes in twice!

Thanks, Hewi. Your grands would love this book!