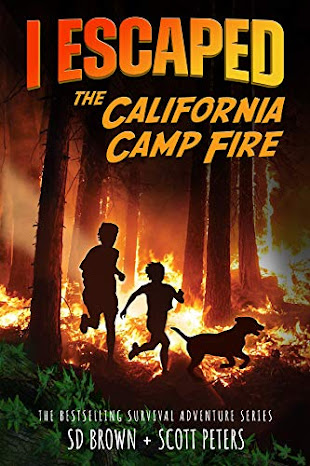 I Escaped the California Camp Fire, by Scott Peters and S.D. Brown, is historical fiction, part of the I Escaped Series that is aimed towards 8–13 year-old readers. However, with its clever descriptions, relatable characters, and pop culture references, it can easily appeal to all ages. For instance, on page 8, the book mentions a character “doing her version of Vanna White and sweeping her hand across the spotless kitchen.”

I Escaped the California Camp Fire is a captivating book that draws you in right from the start. I was so engrossed that I had a hard time putting it down. In the opening scene, the protagonists are left at home alone because their parents are on a trip for twenty-four hours. While their parents are away, chaos breaks out. The siblings, Emma and Troy, are racing against a monstrous fire. Amidst all of this frenzied excitement, an electrical black-out takes place making it harder for them to escape.

The vivid descriptions made the dangers seem life-like and had me clinging to the edge of my seat, rooting for Emma and Troy to make it out alive. For instance, on page 2 the fire is described as accelerating at a rate fast enough to consume “the equivalent of a football field every second.” Further along, the author writes, “It felt like an oven cranked up to broil.” Later, Troy states, “Look at the hill, flames are spilling down it.” This gave me terrifying visual images while creating a phenomenal picture in my mind. I could practically feel the scorching heat right through the pages. And finally, when I read, “The flames hit the ravine and it looked like a movie filmed in Hades” it made me realize how dangerous the California campfire really was.

Troy and Emma were in a couple of tricky situations, but they fought through the smoke and flames managing to survive. It’s truly remarkable how they were able to live through the sixth most likely devastating fire in the U.S. all by themselves.

This book demonstrates how devastating fires can be and the long-lasting impact on people’s lives and the environment. For example, the California Camp Fire destroyed thousands of buildings, and some people are still financially recovering from the fire. It is estimated that the fire cost people 150 million dollars.

For all of the reasons above I would highly recommend this book. Overall, it was thrilling, action-packed and I really enjoyed reading it. While the story itself is fictitious, I learned about a fascinating, albeit scary historical event from reading this book. 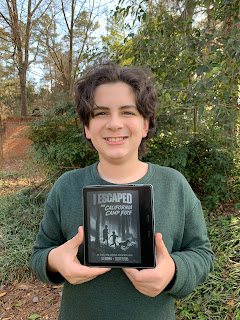 Blake Kurta is 12-years-old and lives in Charlotte, NC. He is homeschooled. In his spare time he enjoys constructing 3D Metal Earth rockets, painting, and pickle ball.
at March 19, 2022

Great review. I'll have to give it a read!

Yes, it was, Joe. Hmmm…. I suspect you are related to the author of this blog post!

I've read a few books set as fire survival stories during the pandemic and enjoy the immediate danger set upon the characters (high stakes makes for exciting reading). Great review of a new book to me.

Thanks for this informative review. The quote gave me such a devastating visual of how swift and damaging the fires are: “the equivalent of a football field every second.”

Thank you, Theresa. maybe some of your students will enjoy this book too.

Thank you, Blake. I appreciate your excellent review of this interesting novel, and I look forward to reading it!

What a wonderful review. I am a huge fan of survivor stories, so this one is going high on my TBR list. Thanks for telling me about it.

Thanks for your great review, Blake. It must be a good story if you couldn't put it down.

Thanks for all of your support.

A great review, Blake, and welcome to Marvelous Middle Grade Monday (MMGM). You brought out the best points in this book and made me want to find a copy today. We had fires close by like this in December and it's a scary experience. I hope you'll keep reading and reviewing.

Thanks for encouraging another new book reviewer, Greg. It means a lot to these brothers to be published online!

Well-written review, Blake! I'm going to look for this one at my library. Great idea, Carol, to feature reviews from young readers: I love hearing their perspective.

Nice review, Blake. You really know how to cut to the chase in a book review. Which is kinda-sorta like the book reports we had to do back in the day.

Thanks Greg, it means a lot to me.

You are right, Sue!

Thanks for the review, Blake - you make the book sound a very exciting read!

thanks for your support, Vainer.

Great review! I just finished a YA novel on forest fires and it's interesting the difference about the approach taken in both novels. This sounds like a thrilling read and I'll probably check it out! Thanks for sharing!

Thanks, Patricia. I'm sure Blake will appreciate your comment.

Thanks for your kind remarks. It means a lot to me.

Great review. I'm a huge fan of survivor stories, and I just ordered a copy of this book. Thanks for sharing your thoughts.

Thanks for this well-written, thoughtful review, Blake. I'm so happy to hear that you enjoyed the book. Best wishes to you.

THANKS, Scott. This was Blake's first review--I hope for many more!

Thanks, Scott, for encouraging Blake. That will mean a lot to him.