A front-seat view of America during the Great Depression, Picturing a Nation by Martin Sandler (Candlewick Press, 2021) presents over one hundred and thirty photographs that give life to our past in a way that appeals to anyone, age notwithstanding . Using photos taken by the Historical Records department of the Farm Security Association, this photographical memoir contains the greatest works of Jack Delano, Dorothea Lange, Marion Post Wolcott, Walker Evans, and many more.

Divided by region, (Midwest, Northeast, South, and West) each of the four sections of Picturing a Nation focus on the people impacted by the Great Depression, not the economics or statistics. Subtitles and text enhance each page, with a caption and perhaps a relevant quote from the photographer besides the photographs. Additionally, a short history of the Farm Security Administration and the people behind it as well as a brief background on the Great Depression introduce the book. These first few pages bring meaning to each of these carefully curated photographs. The only shortcoming of this format is that page numbers have been excluded, making it difficult to revisit favorite photos. 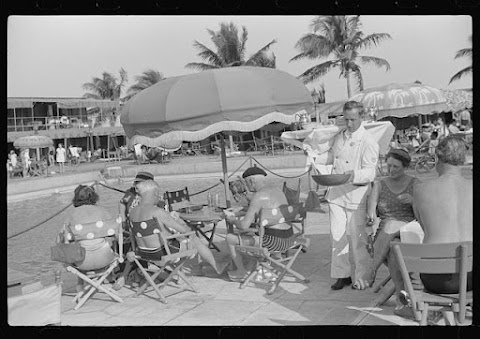 Taken by Marion Post Wolcott, this photo was shot at a poolside in Miami, Florida, and illustrates that a small, privileged population of the nation was not aware of the suffering of their neighbors. Picturing a Nation’s candid approach to life during our worst economic depression makes the reality of this event even harsher. 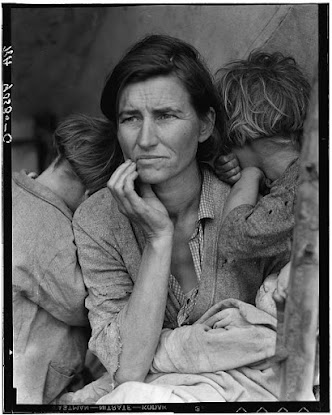 On the other side of the spectrum is this Dorothea Lange photograph, Migrant Mother, which was originally taken for the Historical Section of the FSA and is now widely regarded as the face of the great depression. Migrant Mother represents with unflinching clarity what life was like for the fifteen percent of the U.S. unable to find jobs. 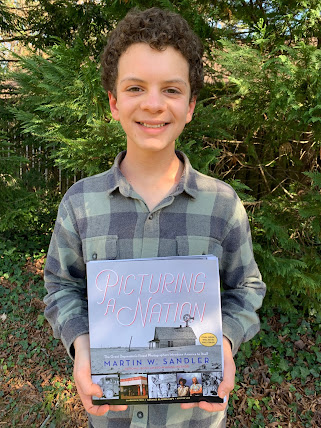 GIVEAWAY (with a caveat)

Leave me a comment by March 30 if you are interested in entering this giveaway. The copy which Elliott read is an ARC and in black and white, and the binding isn't as secure as the final version of the book. As a result, the Introduction's pages are no longer attached to the binding. In addition, the first few pages are out of order and upside down. But, as Elliott said, this is a tremendous pictorial display that chronicles our nation during a difficult time. U.S. addresses only.
at March 23, 2022

Thank you for this review. I'd love this book for my classroom. I remember studying The Great Depression in college. A few years ago, I was on vacation and happened to go into a museum that had a huge Dorothea Lange exhibit. It was wonderful seeing her enlarged photos when I'd only seen them in textbooks before. Did you know she also took a lot of photos of the Japanese in internment camps?

Thanks, Theresa, I didn't know that. This is a great classroom book.

Ellliot is a terrific reviewer! And this sounds like a visually interesting and informative book.

thanks, Jilanne. He is!

Wow! Great review! This book sounds like a must-have. Thanks for sharing!

and thanks for commenting. Marci!

Thanks, Terri. I think Elliott learned a lot-- so have I as I've leafed through the book.

Elliott, thank you for sharing this interesting book with us.

Thank you for your comments! I look forward to seeing who wins the giveaway; this book is an engaging way to learn about the Great Depression.

Thanks Esther, you're in. And Thanks, Elliott, for providing the review.

I bought this for my school library-- so fascinating! Great review.

Great. It belongs in a school library!

Thanks for the great review, Elliott. I've always been interested in the Depression, and pictures tell the story of what people expeirenced so well. Thanks for offering your ARC for a giveaway.

Thanks, Natalie. You're in!

What a wonderful review, Elliott. It looks like an interesting read with great pictures. What an important book for school libraries. I have mostly seen the Depression in movies vs books. My husband was born during the Depression. My in-laws washed, saved and reused plastic bags, never threw anything away but repurposed the item. That was my first glimpse of how much it impacted people -- even as older adults. Thank you for sharing. Will pass on the giveaway.

Thanks for this great review. I just received a copy of this book and can't wait to read it. The depression left such a strong impression on my dad that we grew up with a closet turned into a pantry that he stocked with all kinds of canned good "just in case another depression happens."

Thanks, Alex. That is a very vivid connection to the depression. Sometimes I wonder about my using every little drop of something is related to my parents' going through the same.

Thank you, Patricia. I still wash and reuse plastic bags because my mother did!

Great review--very well thought out and so organized. I would enjoy reading and learning more about this time in our history. The photography is stunning.

Pictures can speak louder than words, especially when looking at the past. The images you shared back that up. Loved your final paragraph as it sets the stage for many more to give this one a go. Thanks for the great review, Elliott. I will have to pass on the giveaway given my stack of books to get through has reached several dozen.

Thank you, Greg, for encouraging Elliott. Danielle, your name goes on the list!

Thank you, Alex and Patricia, for your impactful anecdotes. I also appreciate Greg Pattridge and Danielle's encouragement. Your comments have brightened my day, and I'm glad that you appreciated or could relate to my review.

Elliott is becoming a welcome regular here. Nice review! I loved this book as well. No need for me to be in the drawing. Thanks for the post.