A PENNY'S WORTH: A Picture Book Review, Giveaway, and Mini-Author & Illustrator Interviews 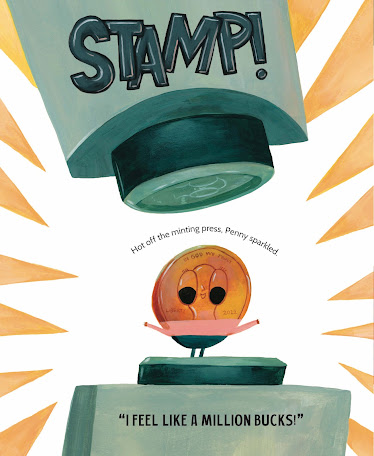 "Hot off the minting press, Penny sparkled." That's the first line of Kimberly Wilson's debut picture book, A PENNY'S WORTH (Page Street Kids, 2022). With engaging illustrations by Mark Hoffman, this STEM story of a pretty copper penny will find a special place in a preschool - second grader's heart.

Penny launches into life ready to be spent. But she soon finds out that while other money appears useful, she is ignored, forgotten, or worse--stuck to a piece of gum. "This is non-cents! she thought."
She sets off on a journey to prove her worth.
First she tries her hand at following Quarter into an arcade slot. CLINK, CLANK, CLUNK Penny is returned. "I wish I measured up, Penny thought."
Next, she tries her hand at buying some penny candy. 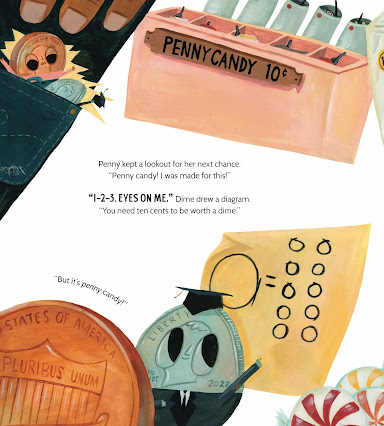 But, as Dime points out, a penny won't buy a lollipop like it used to.
Penny takes a tailspin and goes over the edge when she reads this headline: 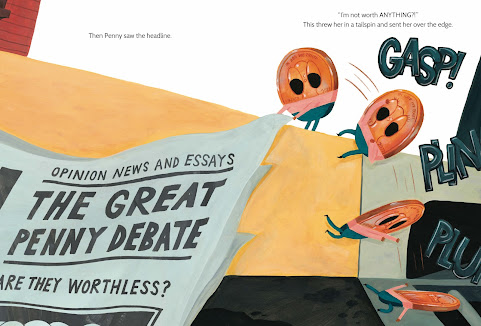 She peers down and imagines life as a sewer cent... 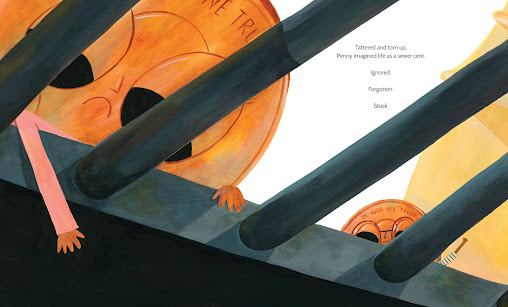 "....Ignored. Forgotten. Stuck." (I assume if this was a novel this would be her "Dark Night of the Soul" moment.)
A friend comes alongside and leads her out of despair. "Heads up," another penny said, "we're good luck when we put our best face forward!"
Penny follows and finds herself by the side of a fountain filled with pennies. A little boy picks her up and she listens to his whispered wish.
"She beamed. He can count on me!" 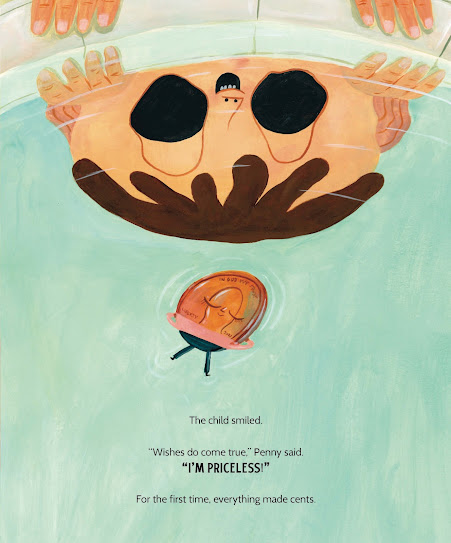 As you can tell, Kimberly is a punny writer (Sorry! I couldn't help it!) and includes world play and puns so that adults will enjoy reading it also. To find out more of Kimberly's "Two Cents on Picking the Perfect Pun," click here for her recent SCBWI-Carolinas post.
AUTHOR & ILLUSTRATOR INTERVIEW
Carol to Kimberly: How did you come up with the idea for A Penny's Worth?
Kimberly: A Penny’s Worth began as a Storystorm 2019 idea. I looked at the coin jug on my kitchen counter and saw something more––a plucky penny on a mission to prove she’s cent-national, despite her face value. Through Penny’s journey, I realized I not only had the opportunity to make readers laugh with countless puns and introduce them to money math, but also to show them the importance of self-worth.
Carol: What was your path to publication?
Kimberly: The writing journey for this book took me to a NJ SCBWI conference in June 2019 where I was asked to revise and resubmit to Page Street Kids. I was thrilled, and after working with them on a few rounds of revisions, they made an offer approximately a year later!
Carol: What did you think of Mark Hoffman's illustrations?
Kimberly: I am a huge fan! When I first saw the character sketches, I was captivated by the colors, dimension, and expressions––and who doesn’t love a penny in pants! When I saw the final art, one of many things I was taken with was the retro feel Mark gave to the arcade and candy shop.
Carol: What's next?
Kimberly: A DOLLAR'S GRAND DREAM (Spring, 2023, Page Street Kids).
****
Carol to Mark: What medium did you use?
Mark: Acrylic.
Carol: What was it like illustrating this book?
Mark: The book was a lot of fun to work on because it had so much going on with each spread. This meant I got to think of the page like a collage of moments. Hopefully that comes across in the reading of it.
Carol: Why did you use green so much in the illustrations?
Mark: I wanted to capture a hint of the oxidized copper.
(Carol to herself: And I thought it was because the book was about money!) 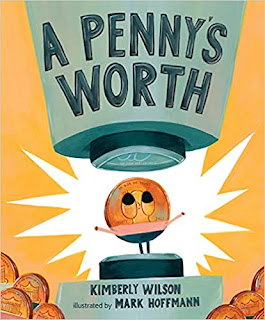 A Penny's Worth comes out April 5! Join Kimberly and Mark for their virtual launch which will be moderated by SCBWI-Carolina's own Ashley Belote. And, if you're in Charlotte, NC, come meet Kimberly at Park Road Books (THE independent bookstore in Charlotte) on April 24 for story time and reading.
GIVEAWAY
To enter this giveaway, just leave me a comment. MAKE SURE YOU LEAVE YOUR EMAIL ADDRESS IF YOU ARE NEW TO MY BLOG! If you already subscribe to my blog, I'll put your name in twice. If you don't already subscribe but decide to follow my blog, I'll add your name for a second chance. Giveaway ends April 7.
Congratulations to Gail Cartee, who edged her way to the front of the crowd last week and won THE VERY OLDEST PEAR TREE.
at April 02, 2022

As a math person who has written educational books on math topics, I love this picture book idea. I enjoy reading and writing with humor and puns so I can't wait to read this book. Thank you for the interviews with the author and illustrator.

This looks like a delightful book. Thank you for sharing it with us. It will be fun to read it and then share it with some young and older readers I know!

Thanks Esther and Danielle, for being faithful blog followers. Your names start the list --twice!

This book is so fun! I thought even an older child could use it to learn about inflation and the wages versus the costs of things that interested kids 75 years ago.

What a brilliant idea for a picture book! (And I still pick up pennies...They seem to turn up in parking lots as the snow melts.)

Thanks Gail and Janet. I agree Gail--it's a book that will appeal to all ages.

I subscribe to this blog via RSS feed, hope I win a copy for my twins!

Thanks, Zach. I hope you win a copy too! (I always want EVERYONE to win!)

A bright shining copper penny was very exciting to have when I was a little girl. It could still buy something and people said “a penny for your thoughts.”

Nice to hear from you, JoLyn. I'm not surprised the book resonated with you!

Such a clever book!! That title! Thanks for sharing!

Marci, Please leave your email address so I can contact you if you win. Thanks.

This is such an amazing book and I love the story behind the story. Congratulations!!!

Thanks, Ashley! Look forward to your enthusiastic introducing tomorrow night!

What a fabulous new book. My grandchildren will like it...and they will even learn from it.
I absolutely love the the pictures and how they pretty much stick to just a couple of colors. Very nice. I'm adding this to our TBR right away.

Thanks, Ravenz Reviews. I found your email and so you're in the giveaway!

What a cute idea for a book. The illustrations are great too. Thanks for the heads up.