REVIEW OF UNICORNS OF THE SECRET STABLE

I'm joined by my granddaughter, Eleanor Edgar, in this review.

It’s been a long time since I’ve read early chapter books. But when my fellow SCBWI-Carolinas friend, Laurie Edwards, reached out to me with the promise of books, how could I say no?

Below you’ll find a review of four of Laurie's newest stories (Books 9-11) in the Unicorn of the Secret Stable series. Each book includes this introduction to the series, so the books can also be read as stand alone books. 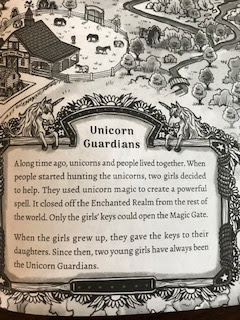 The books are perfect for girl readers who are new to chapter books; they're each around 70 pages. The large font, few words on the page, and occasional illustrations by Jomike Tejido, help readers make the transition from picture books to chapter books.

The stories are an interesting mix of fantasy and reality. The two protagonists, Iris and her younger sister Ruby, received the key to the Magic Gate from their mother, who no longer remembers the unicorns. She insists that her daughters have active imaginations--which is a wonderful theme within all the stories.

The author does a good job of differentiating the "real" world from the fantasy world as the characters must unlock a gate and go into the Enchanted Realm to interact with their unicorns. There's a C.S. Lewis feel to the books as the characters go through this portal into an imaginary world. In the "real" world the girls experience modern-day problems and have typical sibling and friend issues.

Each book ends with three sets of "Think About It" questions that encourage readers to delve more deeply into the story's message. 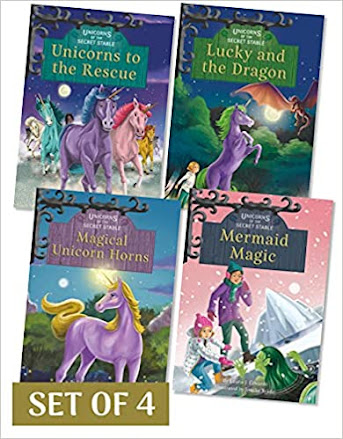 UNICORNS TO THE RESCUE

Carol's thoughts: Ruby and her favorite unicorn, Tempest, is gone! Iris is desperate to find her and asks the flying unicorn, Ember Shadow. to help with the search. After a time of worry and distress, Iris finds Ruby imprisoned in a cave. Iris uses her wits and the unicorns' help to engineer her sister's rescue.
LUCKY AND THE DRAGON
Eleanor’s thoughts: “This story is about a unicorn and a dragon. The unicorn, Lucky, defends the herd of unicorns from a dragon, Spitfire, who flew down and tried to hurt the unicorns.  But he did not hurt him because Lucky scared him by standing on his hind legs and looking like he would fight. In the end they got along well because Spitfire said he was sorry and Lucky forgave him. I loved it!” ❤️❤️❤️
Carol's thoughts: This story had an interesting parallel between the
unicorn story and Ruby's struggles to make a new friend.
MAGICAL UNICORN HORNS
Carol's thoughts: The "real world" problem in this book is a nosy reporter who wants to obtain a unicorn horn.  He says he wants to find out if they have magic healing powers, but the girls don't trust him as he shadows them and tries to get into Magic Moon Stable. They outwit him (of course!) and the end questions reinforce messages of protection and true friendship.
MERMAID MAGIC
Carol's thoughts: Ruby is sad when her best friend leaves for summer vacation. Iris encourages her to keep an open mind about their vacation. When the girls meet two new unicorns, they're surprised at the places their new friends take them. They explore the snowy Northlands and discover--of all things--a mermaid and narwhals.
I wish I had these books when I was a first grader! The interaction of imagination with the characters' "real lives" is clever. I hope many readers stretch their imaginations as they enter into the Enchanted Realm and the adventures that lie there.
Since Eleanor is now enjoying these books, I have three different giveaways for you instead. As promised, the spring issue of Talking Story, is on "How to Empower Disability Through Kid's Lit." Here's another chance to win Monica Roe's book, AIR; A.B. Donahue's book, NO CLUES YOU LOSE; and a picture book illustrated by SCBWI-Carolina's own Vanessa Brantley Newton, MY THREE BEST FRIENDS and ME, ZULAY. Giveaway ends April 16,--Make sure you leave a comment through the email address in the newsletter.
Congratulations to Theresa Milstein who won a copy of No Clues You Lose from my last blog.
at April 13, 2022

These chapter books look great! Thanks for sharing!

These look adorable! My five year old would definitely be a fan. :)

Thanks JOyce, Marci, and Monica. They are cute books for little girls!

Thanks ever so much for the reviews, Carol and Eleanor!

It was our pleasure, Laurie!

These sound like wonderful chapter books for young girls. Thank you, Carol and Eleanor for reviewing them for us!

Thank you for your comment-- please leave your name so I know who to thank for stopping by!

Thank you so much for writing this review, Mrs. Baldwin and Eleanor. I enjoyed seeing both of your opinions on this wonderful book series.

These look awfully cute. Thanks for the heads up. I will pass on all the giveaways. I am just buried in books.