Two Tech Toys and One Book

It has been quite awhile since I have posted about a technology tool that I have found useful. In the last ten days I've used two that I want to share with you.


During a recent class at Central Piedmont Community College on "Crafting Characters that Connect" I brought Joyce Hostetter into the classroom via this wonderful tool, a Microsoft RoundTable camera.


The students enjoyed interacting with Joyce as she answered questions about character development, staying focused as a writer, and receiving critiques.
A week later, I spent time researching for Half-Truths in the Carolina Room at the Charlotte Mecklenburg Public Library. Hours sped by as I looked through the Charlotte News (Charlotte's afternoon paper) and the State of Zion (the weekly newspaper of the African Methodist Episcopal Zion church) from 1950 on this machine: 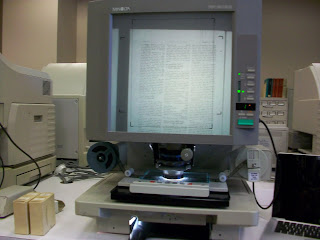 A teenager walked by and asked me what it was. Microfilm machines aren't new technology, but they're helpful for reading old newspapers and magazines to gain an understanding of a time period. Unfortunately, they don't have "search" functions and this type of research feels very similar to sifting through sand to find treasure.


But the real treasure that I found was this book: 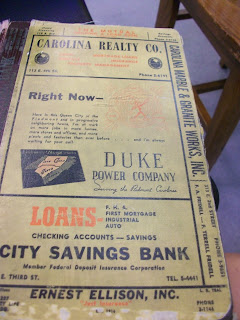 The Charlotte City Directory for 1950 provided such interesting details as the names of the jailer and sheriff  as well as a list of area dentists. I found a listing for the Coca-Cola company that will play a small role in my book. Each page was packed with information. 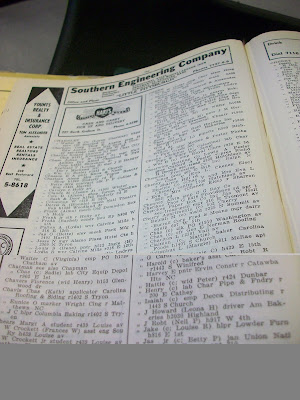 Not only were people listed with their phone numbers, but there were also street listings that included an assortment of information. A small icon of a telephone indicated whether or not an individual had a phone,  a "r" showed that the person lived in the rear of the building, occupations such as maid, cook, lawyer, or company president were listed, and a c with a circle around it stood for "colored."


Technology carries us forward providing many new educational possibilities. But history provides a great many lessons too.

Oh yeah, I love city directories! They give so much detailed info and they verify which businesses were operating at the time of my story.

I also love the laborious old microfilm machine even though I used to be afraid of it.

And me on the screen - that is okay too. Thanks for hosting me. Your class was great!

Yes, I'm still a little afraid that I'll mess up the machine. But the more I use it, the easier I get (like all tech tools, right?)
You realize that your mentoring has gotten me into this mess...right?

Carol, How strange that you would mention microfilm. Just recently, I was thinking of my college life a LONG time ago and how we used microfilm when doing research, and how much tech has changed things!
A very interesting and informative blog. Thank you!
Marsha Hubler
Check my latest blog about doing research for writing at
www.marshahubler.wordpress.com

YEs, technology does bring more information to our fingertips, but somethings aren't available on the internet! Microfilm is still a pretty cool tool! Thanks for visiting my blog, Marsha. I linked to your research blogs on my class wiki.

Very interesting blog post, Carol. Thanks for the pictures. They helped to make it all very clear. You showed technology of yesteryear and today and one interesting old directory. I enjoyed seeing it all.

Thanks, Linda. And I needed new technology to post it all! Hadn't thought of that angle too.

You are amazing. And such a tekky!

Funny, I don;t think of myself as a techie. But it's fun learning and trying out new things!