Congratulations to Connie Saunders for winning THROUGH THE WARDROBE from last week's blog. Here's a tip to win a book. Whenever Connie enters my giveaway, she ALWAYS shares it on social media. This earns her more chances to win a book--and it works!

"This book is for every kid. Whether they pay for their lunch or not."  FREE LUNCH by Rex Ogle. 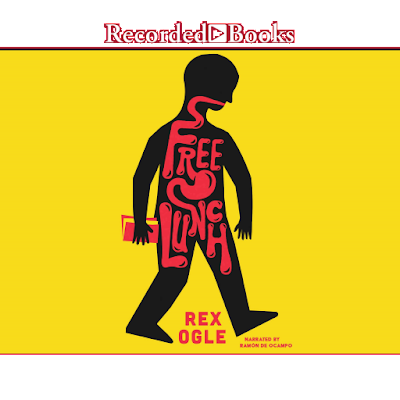 "Why can’t I get what I want at the grocery store?" Rex asks his mother. Unfortunately, he knows the answer.  It’s been like this all his life. He hates seeing all of the chips, candy, and ice cream that other kids eat that he doesn't; he hates watching his mother try to stretch every dollar and use food stamps; he hates his constantly empty stomach; he hates having cashiers looking at him like he might steal something because his clothes come from the thrift store.

Told in first person POV, this nonfiction autobiography is Rex's own story growing up in a dysfunctional family. He's angry that his family--including Sam, his mother's stuttering live-in boyfriend; and Ford, his toddler half-brother that Rex takes care of--are all poor.

And he hates the helplessness and fighting in their home that poverty creates. Rex wants to blame his mother for not working but he also realizes that without a job, "all of the love goes out of Mom." Over and over she tells him how hard it is for her to get a decent job and blames him for being ungrateful.

The ultimate humiliation is when Rex enters middle school and discovers that his mother registered him for the free lunch program. Every day he feels like a beggar while he waits for the lunch lady to check his name off the free lunch checklist.


Ogle doesn't hold back from painting the realistic but ugly picture of his childhood. The family moves frequently as the adults look for jobs. The lack of money leads to tension, arguing, and fighting. His mother gives him a black eye on more than one occasion. Rex's clothes are stashed in cardboard boxes and he sleeps on the floor--along with the cockroaches.

The one bright light in his life is his abuela, his Mexican grandmother. She is his cheerleader. "You are smart and handsome. Life is not always fair," she tells him. "I lived in a one-room house without indoor plumbing and dirt floor with my13 brothers and sisters. We made it work. You will too."

As hungry, poor, and angry Rex is, he tries to control his emotions, to not be rude, and to not hit back. But his own anger makes him feel evil. He has to remind himself that "being poor is not a disease."

In the cauldron of poverty and abuse, Rex experiences problems at school and with his peers. Despite worrying about how he can keep his poverty a secret so that his friends won't turn on him he thinks, "School feels safer than home."

But things get worse. His friends reject him. He wears a monster costume on Halloween and starts worrying that he is a monster-- just like Sam or his mother. His family moves to public housing which is the last straw. He lashes out and tells his mother, "I hate you." She slaps him. Hard. He is constantly on edge wondering when she will strike back him and how could their lives get worse. Would they be homeless? Would they starve? Would he die?

He develops a friendship with Ethan, a boy who he sits with at lunch. Ethan's point-of-view -- that his life isn't as perfect as it seems even though he his parents have lots of money--is eye-opening. "Come on, no one has a perfect life!" Ethan says... "Money isn't everything. Trust me."

Towards the end, his mother gets a good waitressing job and the family takes some steps towards healing. Sam goes out of his way to give Rex an unexpected Christmas gift and the book ends on a hopeful note.

FREE LUNCH tells it like it was for young Rex Ogle. A few readers might object to some crude language. To me, it was a brutally honest book. As Rex says at one point, "I don’t trust the word free. Look what it’s cost me."

The audiobook is narrated by Ramon de Ocampo, who performs all of the voices excellently. I was particularly impressed with how well he showed Sam's stuttering.

In a Facebook exchange, Rex told me this was the hardest book he's ever written--until the one he's writing now which is the sequel. But he's "glad it's helping some kiddos out there."

This is not an easy read; there were times I had to stop listening. I would recommend that middle-grade students read or listen to it with their parents or teacher so they can discuss it together. Although Rex is entering sixth grade in the book, the tough content might indicate it is more for young adults.

If you're interested in adding this book to your home or school library, please leave me a comment by 9 AM on June 26. The winner will receive an audio code and instructions on downloading the book. As always, if you decide to follow my blog or share this on social media, let me know what you do in the comments. PLEASE leave your email address if you are new to my blog. This giveaway is courtesy of Recorded Books.

I started this book at school, and then COVID happened. It was so sad and so good. Please enter me to win tmilstein at gmail

It was definitely a hard book to listen to Theresa. I had to stop several times. Your name starts the list.

It was a really hard book for me to read. I can't imagine listening to the audiobook. Intersting to read your thoughts. Iwill pass on the giveaway. Thanks for the post.

Carol,
This sounds like a book that would benefit all educators. I have a school counselor friend and a social worker friend who work in public schools. If I were to win, I would give this to one of them to put in their school's library. I especially think it would be a great read for beginning teachers. I also posted this on Facebook. Thanks for tackling tough reads and reviewing them. Your posts are a blessing.

Thanks, Carol for sharing this. I would love to win this audio!

Yes, LInda. It would be a FANTASTIC book for new teachers. Eye-opening. You're in twice. ANd Joyce, got your name on the list too!

Sounds like a story I can relate too. Although I never wanted for food, I grew up poor and wore hand-me-downs from kind folks in the community. It had to be difficult for the author to pen.

Thanks for the review.

You will appreciate this book, Sandra. So would your granddaughters.

This is such a powerful and important story for those kids who need to see themselves in a book AND for kids who had no idea that a home life could be like this. Thanks for sharing, Carol.

Thanks, Jolene. You're in!

I just learned that I won the audio version of Free Lunch at your blog giveaway. Hooray! Thank you! I am so excited to be passing it along to a social worker friend who will download the copy ASAP for use at her job.

Thanks so much, Carol. This is a valuable resource.