As many of you know, one of the things I enjoy about blogging is sharing other author's news. This week I am happy to introduce Dorothy Price who endeavored to break into the picture book market for years. I first met Dorothy when I led the Charlotte, NC SCBWI critique group and read this book in its infancy. I am delighted to have Dorothy tell us about her very personal path to publication. 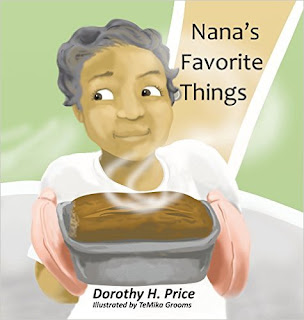 CAROL: What was the genesis of NANA'S FAVORITE THINGS? Was there a particular event in your life that led you to writing about a grandmother with diabetes?

DOROTHY: The story began in 2011 when my 7-year-old daughter, Sanai, helped my mother bake her famous pumpkin and zucchini breads. As the first grandchild, she and my mom formed a strong bond over cooking and baking.
CAROL: How many drafts did you go through before you submitted NANA'S FAVORITE THINGS? What was that process like?

DOROTHY: There were too many drafts to count! I learned that a story isn't as strong as it can be unless you have multiple drafts. I brought the story to my SCBWI critique group and from there, it went through several rounds of edits. After each critique group meeting, I felt like it was getting stronger, but none of the agents I submitted it to offered representation. By the end of 2012, after my last round of submissions, I put it away and moved on to writing something new.

CAROL: Speaking of SCBWI, how has it been a part of your journey to be a published writer?

DOROTHY: I always say I didn't really become a kidlit writer until I joined the SCBWI in 2010. I began writing kidlit in December 2008 after a traumatic experience, but the stories I wrote between 2008-2010 were created before I learned the picture book writing craft. Nancy Krulik is responsible for my joining the SCBWI. It was at her South County Library author visit in October of 2010, amidst a host of children, that I waddled over to her (I was 7 months pregnant with my son) and asked what advice she had for aspiring writers. She immediately said ... "Join the SCBWI!" I am forever grateful to her for that advice. I would love to meet her again and tell her, thank you!

CAROL: I love that story, Dorothy! On another track, do you have an agent?

DOROTHY: Not yet, but I do have an agent who expressed interest in another completed picture book. I submitted to her in September 2015, and she responded in December, but still no contract.

CAROL: How did you find Eifrig Publishing? How many publishers did you query before you found them?

DOROTHY: I only submitted NANA'S FAVORITE THINGS to a few publishers. I found Eifrig on Twitter after following kidlit, picture book, and other literary hastags from authors, agents, and publishers. Those hashtags lead me to Penny Eifrig, the owner of Eifrig Publishing. (Click here for submission information.)

CAROL: Did your editor ask for any changes?

DOROTHY: Yes! I submitted to Penny in the spring of 2013. I didn't hear back from her until October 2013. She had a few suggestions for how to make Sasha's character stronger by having her come up with more ways to help her nana. Of course I brought the story back to my SCBWI critique group for advice, and submitted the revised version back to Penny in December 2013. I heard back from her in January 2014 and she explained that her list was full, but she was still interested in the story. I didn't hear back from her again until April 2014 when she said she wanted to move forward with publishing the book!

CAROL: How long did it take from initial concept to publication?

CAROL: What are your hopes for this book?

DOROTHY: Since this book is based on personal experience, my hope is that it begins to create a dialogue about diabetes in all communities. A number of my close family members have died from diabetes complications, so I have seen firsthand how devastating this disease can be. My mom actually has diabetes, but because of her lifestyle changes, she does not take insulin. She exercises and maintains healthy eating habits which has contributed to her stable health. I would like people to know that diabetes is a preventable disease, if you're willing to make some lifestyle changes.

DOROTHY: My book launches on February 8, 2016. My first book signing is at Park Road Books on February 20 in Charlotte, NC.

Overall, I am extremely grateful for Penny Eifrig and TeMika Grooms who illustrated the book. The journey was long, but well worth it!

"Sasha loves to shoot hoops and ride her bike. Those are her favorite things to do. But she also enjoys her Nana’s yummy treats. One day, Sasha learns her Nana has diabetes and can no longer eat the tasty snacks they have baked together over the years. With quick thinking, Sasha comes up with a clever plan to help her Nana become more active and healthy. Before long, Sasha and Nana realize they both have some new favorite things."

To enter for a chance to win this engaging and informative picture book, please leave a comment by 6 PM on Thursday, January 28. If you're new to this blog, please leave your email address also. Share this on social media (and tell me in the comment) and I'll enter your name twice.
at January 25, 2016

What a touching story and backstory. I'm posting this to Facebook. Dorothy Price, this book is needed! Thanks for believing in it and seeing it through to publication! Carol, thanks for another great interview and promotion of an outstanding book.

Dear Dorothy,
I am so happy that your book got published. Congratulations on persevering.

Dear Carol,
Thanks for sharing another great story of publication!

Congratulations, Dorothy! I was at the critique group when you were working on this, and I know it will be a valuable story for many who have diabetes in their family. Thanks for sharing a debut author's good news once again, Carol!

Congratulations Dorothy! I look forward to sharing this book with my own granddaughter. Carol, I am sharing this post on Twitter.
Thanks for another great author post and giveaway.
Connie
cps1950(at)gmail(dot)com

Thanks Connie, Linda, and Joan, for welcoming Dorothy. Connie, you're in twice!

Thanks, Elena. I'll enter your name for the giveaway. Carol

Carol, thank you for sharing about Dorothy's new book and her journey on the road to publication. Inspiring. PS I called my grandmother, Nana. 😊

Thank you ladies for your support. It means the world to me! And Linda, you were there to hear this story from the beginning! It's come a long way! :-)

Dorothy, so excited for you. I remember speaking with you at the SCBWI conference. You hung in there and never stopped working! Wish I lived closer for your launch. Will plan on seeing you at the next conference.
Sheri Levy

Thank you, Sheri! See you then!

Sounds like a lovely book and one that might just do a lot of good. Thanks for sharing Dorothy's road to publication. Please let someone else win. I am moving over the next couple months and don't need another thing to pack.

I love stories like this! Thanks, Carol, for introducing Dorothy to us! Thanks for sharing your story, Dorothy, and Congratulations on your book! Wishing you continued success.

(I'd love to win, but don't include my name this time, since I've been on a winning streak here and need to give someone else a chance. Thanks, Carol!)

Rosi and Clara-- thanks for leaving comments even though you're not putting your names in. Sheri, your name is in the hat. And Dorothy--it is fun to celebrate fellow writers' successes!!

Tracy, you're in twice!!

It sure is fun, Carol! And thanks to both of you, Rosi and Clara!

thanks, Deborah. You're in!

Carol, thank you for sharing Dorothy's story. Dorothy, I loved reading about your journey. Congratulations on NANA's FAVORITE THINGS!!!

Thanks, Kathleen. I know Dorothy is super excited!

Kathleen, thank you so much!