Kiss of Broken Glass: A Review and a Giveaway

Or to put it simply, if you liked CRAZY, you'll like Kiss of Broken Glass.

When a "friend" finds fifteen-year-old Kenna cutting in the school bathroom and rats on her, Kenna finds herself "Baker Acted" (i.e., involuntarily committed to a psychiatric ward for 72 hours).

The first morning Kenna meets the other teens on the ward and the group therapist, Roger.

I start to fixate on the paper clip stuck to Roger's folder.
The one with all those shiny, sharp possibilities.
I imagine the clip uncurling, transforming,
becoming straight and strong and stiff,
just like an arrow.

A few beads of sweat form on my neck
near the vein that beats faster every time
something really good or really scary is about to happen.

I bet I can swipe the clip when Roger isn't looking,
and I have to bite the inside of my cheek
so nobody sees how excited that idea makes me.

Then I remember what Donya said.
How they can keep me here
even longer than 72 hours
for something as lame as a paper cut.

So I sit on my hands
and try to get a song stuck in my head instead,
and send screaming telepathic messages to Roger
to put that freaking paper clip away
before the click, click, click
shoots a bullet in my brain. (p. 24-25)

From that moment, the reader is immersed in Kenna's inner turmoil about an addiction she jokes about, "It's kind of like a club, I say. Sisters of the Broken Glass," (p. 23) and pretends she can quit at any time.

Kenna's favorite place at school is the bathroom where she can draw and be alone:

It's okay to be myself
in that handicapped stall,
even if being me feels
sort of like a blank piece of paper.

I don't have to come up
with any colorful lies in there,
or force a smile until my cheeks hurt,
or roll up my long cotton sleeves,
and show off my scars,
just to fit in. (p.41)

Cutting is an endorphin riddled high.

The skin tears
and I feel this rush
swirling in my brain
like a waterspout.

And the pain doesn't feel like pain
but more like energy
moving through my body
in waves.

Purging all the broken bits out of me
like a tsunami washing debris to the shore. (p.65)

While Kenna wrestles with guilt, she is also aware that she doesn't have a huge, deep dark secret causing her actions. She realizes that her main motivation is to be accepted by the gang of girls in her school who cut themselves.

She uses her one phone call to call Rennie, the girl who is the head of the gang. Rennie picks up the phone.

And then I hear her.

"This better be good."

Her words are like punches
knocking the breath out of me.
I want her to say:

OMG! Are you okay?
This is sooooo unfair!
Are they going to let you out soon?
Everybody misses you like crazy.

I hear water running and someone giggling
in the background. Then Rennie sighs,
like she's bored with me already.

"Look. The school's on high alert," she says.
"A message went home telling parents to be
on guard for the Top Ten Signs of Self-Harm
and now every mom in Manatee County
is searching for scissors under the bed
and taking inventory of their Band-Aid boxes."

I hear the phone chasing hands
and another voices jumps on the line.

As crushing as that phone call is, it is also an eye-opener for Kenna, as she begins to see the lies she had begun to believe. She also admits to herself,

And I wouldn't say it feels
like a huge first step.
Not in the Mount Everest way
that Skylar said it would.

And just for a second,
a swirl of promise
tickles up inside me.


The book doesn't end syrupy sweet, but it does end with honesty and hope. When her family comes to pick her up Kenna says,

And it's not like I get
all happy ending-ish
and ride off into the sunset
or some crap like that.

But I do feel like I have a choice.
Like a fork in the road or whatever.

I just hope 937 Things to Do Instead are enough.


***************
Madeline Kuderick wrote Kiss of Broken Glass the year following her daughter's involuntary commitment under Florida's Baker Act for cutting. Kenna was in sixth grade when she found herself surrounded by teens who cut themselves and as Madeline wrote in the Author's Note: "She tried it, experimentally at first, but was soon drawn into the strangely addictive allure of the blade."

The book ends with two pages of resources. If you know someone who is struggling with self-harm, this book may be their first step towards hope and help.

I met Madeline at the SCBWI Florida mid-year conference and was excited to have her autograph a copy of her book. I'm offering Kiss of Broken Glass as my first giveaway of 2016 and hope that it'll eventually land in the hands of a teen who needs to know she's not alone. 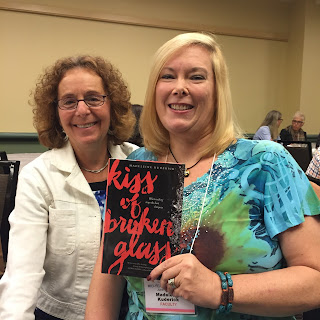 Leave me a comment by noon on January 14th to be entered into this giveaway. If I don't have your email address, make sure you leave it too.

Wow! What a story a in verse. I hope it helps those who need help.

Hey, hey, hey! A great book review by a great friend about a great book of another great friend! Seriously, I'm so glad to read this review of a book that is so relevant in today's society, and so beautifully written. And I'm thrilled that our paths have all crossed in this zig-zaggy writing world! Best writing wishes to both of you!

thanks, Linda. You're in!

I just started reading YA again and this looks like a great read!

The writing is just spectacular. I did love Crazy, which you recommended to me. I found Cut by Patricia McCormick really hooked me as did Cheryl Rainfield's Scars. This is, unfortunately, an illness with much to be examined. Pleas put my name in the drawing. I shouldn't, but I can't help myself. This one sounds too good. Thanks for the post and the chance.

I am, as always, in awe of writers who can take on such tough subjects and create something beautiful, meaningful, and hopeful. Thanks, Carol, for sharing Madeline's book, Kiss of Broken Glass, with us. (Glad you're back. I missed you!)

Thanks for leaving comments, Dorothy and Rosi. I'm glad you entered and happy that my blog started sending out emails again! You're both in. Thanks for being such faithful followers!

Thanks, Clara. I had some moments of anxiety about not getting my blog posts out to my little world of followers!

This book is timely, because one dear young woman in my family is afflicted with this desire to cut. Perhaps this will help her--and her loving parents--to get a clearer picture of just what prompts her to indulge in this self-harming behavior. Thanks!

Carol Ann, your name goes into the hat. And even if you don't win it, I hope you'll get a copy for the young woman. She'll resonate with the words and the story.

It sounds like a powerful, moving, beautifully written book and I can't wait to read it. Thanks for sharing this, Carol, and congratulations to Madeline!

Thanks, Jo. It is all of those things. Your name is in!

I am aware of cutting as a way of coping with pain but not so much as a fad or trend! I do want to win this book. So please enter me in the drawing!

Thanks, Joyce, you're in!

Powerful for sure. So glad tough topics are being discussed in books!

Such a moving and compelling novel. KISS OF BROKEN GLASS will put a spotlight on an issue that has been in the dark too long.