SEEKING FREEDOM: The Untold Story of Fortress Monroe and the Ending of Slavery in America- A Nonfiction Picture Book Review and Giveaway

I'm starting off the new year by joining a blog tour for a new book by award-winning Selene Castrovilla, SEEKING FREEDOM (Calkins Creek, 2022). The expressive watercolor illustrations are by award-winning artistrator, E.B. Lewis. 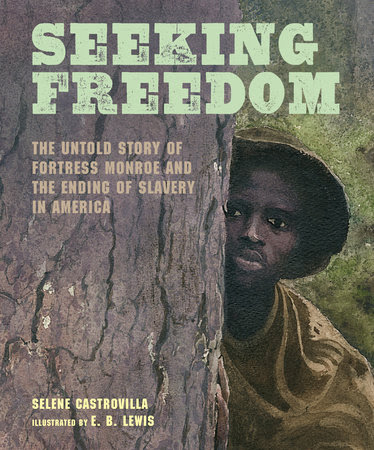 Although most of this informational picture book for 7-10 year-olds is presented in a journal format, the book opens with a quote from President Abraham Lincoln's First Inaugural Address on March 6, 1981:

I have no purpose, directly or indirectly, to interfere with the institution of slavery in the States where it exists. I believe I have no lawful right to do so, and I have no inclination to do so.

The next page explains how Lincoln was unable to convince the remaining Southern states (seven had already left the United States) to stay. War broke out on April 2, 1861. Five days later, Virginia abandoned the country. Fearful of being separated from their families and forced into hard labor, "The enslaved people...would do anything to be free." 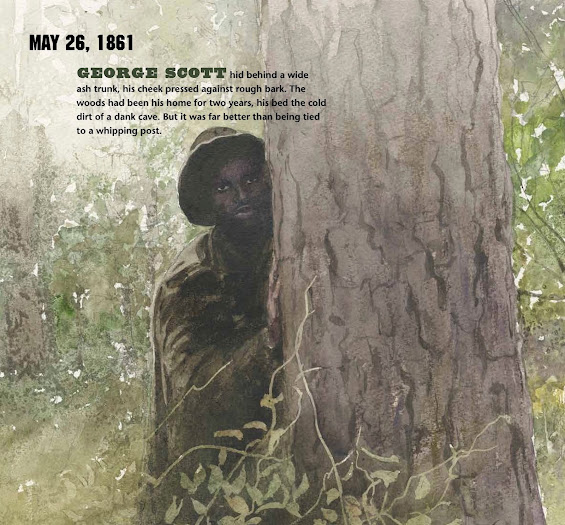 Scott knew the forest and swamps--but he didn't know what was going on the town of Hampton. He overheard field hands talking about how three Negroes had escaped to a Union fortress nearby--and hadn't been returned. Could it be? Were the Union soldiers inside Fortress Monroe friends to Negroes? 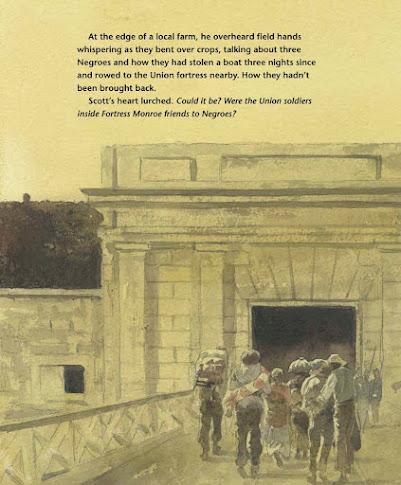 Scott watched as eight Negroes headed inside. He waited. But they didn't come out. Was it true? Were these people now among friends?

Despite his fears, he snuck in with another group of Negroes and waited for an interview with the commander of Fortress Monroe--Major General Benjamin Franklin Butler.

By the time Scott spoke with Butler, the major was frustrated. He had interviewed many Negros but hadn't obtained the information he needed: Where were the Confederates stationed?  The major was also in a difficult position. He was holding every Negro who came to him as contraband of war--"property used for warlike purposes against the government of the United States."

When Major Butler spoke with George Scott he realized he'd found the man he was looking for--someone who could track down the Confederates. Even after finding out that his plan to use Negros as spies was approved, Butler was still worried. Could the fortress remain secure against enemy attack? He prayed for Scott's safety.
George Scott wandered for eight days looking for the Confederates. He prayed that the Lord would lead him. Just then, he saw thousands of Confederate soldiers outside a church. His prayers had been answered.
Scott raced back to the fort with the news he had gleaned--the rebels were preparing to cut off all supplies. 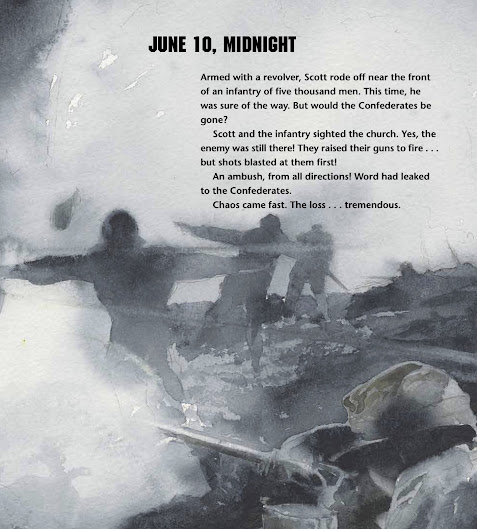 Butler's men had not died in vain. The confederates had fled; the threat to the fortress was over. But how could Butler reward Scott? When Scott asked for freedom, Butler put his legal skills to work.

Butler implored the President and Congress:

These human beings must be given the free enjoyment of life, liberty, and the pursuit of happiness. 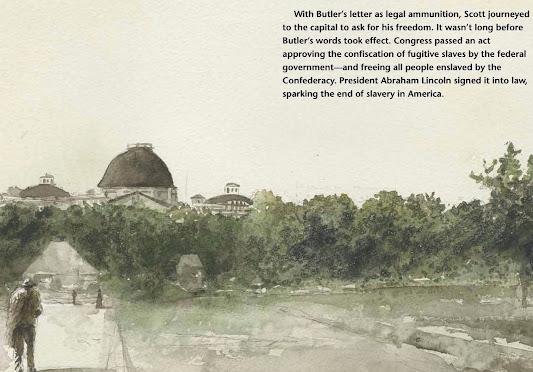 Seeking Freedom includes eight pages of back matter; that's an exceptional amount of pages! But the sections on the Aftermath (including references to the Confiscation Act of 1862 and the Emancipation Proclamation), the Contrabands, Benjamin Butler's Legacy, George Scott, and Fort Monroe in Hampton, Virginia, add a depth of information to this informational picture book that will be appreciated by older students as well as adults. By the way, the last spread is a picture of President Obama signing a proclamation establishing the Fort Monroe National Monument.
Interestingly, there are no known images of George Scott. William Headly shared Scott's story. He escaped enslavement and became a contraband in North Carolina. His cloak is an old cotton bag.
For a view behind the scenes of how Selene came to write this story, see her post on Nerdy Book Club.
Here's a YouTube video of Selene talking to her editor, Carolyn Yoder, about writing picture books which bring alive history.

To enter this giveaway, please leave me a comment by 6PM on January 8th. U.S. postal addresses only. If you decide to follow my blog I'll put your name in for a second chance.Please include your name and email address if you are new to my blog. If you are hesitant to leave your email address, you can reach me directly by clicking here.

Congratulations to Gail Cartee who won The Dirt Book from last week's blog.

I will learn so much from this book. I enjoy learning about history, especially about people who I've never read about before but displayed so much bravery/courage to overcome seemingly impossible obstacles.

You would love this book, Danielle!

Thanks for including the interview between Selene Castrovilla, and Carolyn Yoder. It made me want to read Selene's other books.

Thank you, Lois. I'm sure Selene would be happy to hear that!

Dear Carol,
It hurts to think of all the hardship and pain the slaves went through. Do not enter my name in the drawing.
Thanks for giving us food in books for thought!

Carol, thank you so much, for featuring Selene's book! I won't enter since I have a copy. But congrats to the lucky winner! And congrats to you, Selene!

Thank you Joan & Joyce. It is a thought-provoking book.

I love Selene's passion for history and people. She does bring it to life in a way text books can't. I also love, Selene, as one of our Long Island authors and mentors in SCBWI and LICWI.

Thank you, Debbie. How cool that you know Selene personally!

Thank you Carol, for your lovely and thoughtful review! And thanks also to everyone who commented. It’s fantastic to have my words connect. A big hug to Joyce and Debbie, love you both!

I am so looking forward to reading Selene's new book. 8 pages of backmatter! That is incredible. Thanks for your review.