"I don't know but I may succeed in governing the nation, but I do believe I shall fail in ruling my own household." Abraham Lincoln
Author Beth Anderson uses that quote to draw readers into the life of Abraham Lincoln's boisterous son, Tad. You'll see why that quote is a fitting preface to another great picture book published by Calkins Creek. 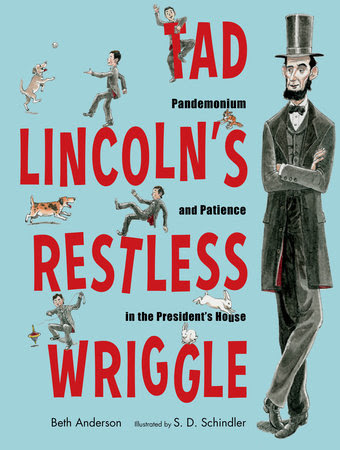 Thomas Lincoln wriggled from the moment he was born.

Like a tadpole, thought Abraham, and he called his son "Tad."

So did the wriggle.

In that simple manner we meet Tad.

Since he was born with an opening in the roof of his mouth, Tad's words were hard to understand. Although he had difficulty communicating clearly, his energy was quite obvious.

Tad careened through the East Room in his chariot, scattering shrieking ladies not corners. "Get out of my way!"

The staff huffed. Children should not be seen--and certainly not heard!

The same was true in the classroom:
Tad ran through the house, yard, and stables, tore through his father's important meetings, and even went to a soldier's camp.

Unlike today when presidents are closely guarded, Abraham Lincoln walked Washington's streets accompanied by his son. Tad learned how to comfort wounded soldiers and listened as his father chatted with storekeepers and war volunteers.

Visitors poured into the White House requesting time with the President. Lincoln didn't turn anyone away. 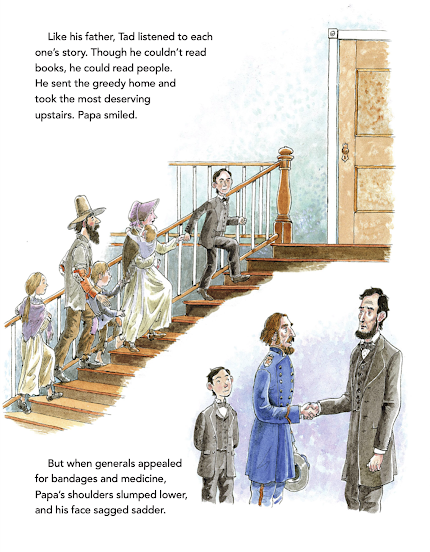 President Lincoln watched his young son's compassion for soldiers, homeless men, stray dogs and kids, and even for the Christmas turkey (who had become one of his pets). Despite his difficulty with language, Tad managed to convince his papa to rescue the turkey from being served as dinner.

When Tad received more books as Christmas presents than his father would have time to read to him, he decided to share them with injured soldiers. He filled a big box with books and goodies and delivered them to the hospital.

Although he couldn't write, "his message was clear as he filled the very big box... 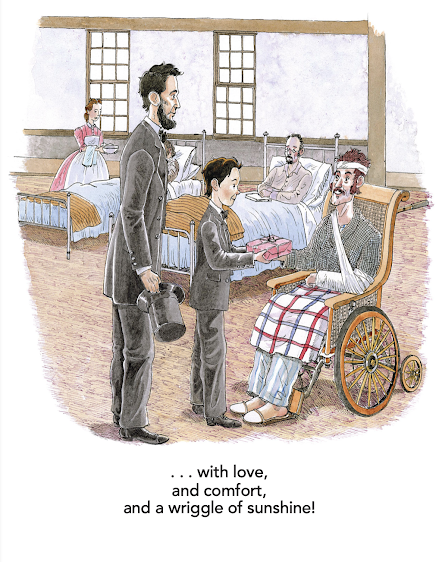 S.D. Schindler's illustrations are magnificent and highlight the story in a superb manner.

Beth Anderson shares an interesting assortment of information in her Author's Note. She began researching the first presidential turkey pardon and became entranced with the close father-son relationship between President Lincoln and his fourth son, Tad. Readers will learn about how Tad's partial cleft palate would be surgically repaired today. Personally, I was intrigued by Beth's bibliography. Her primary sources include several books written in the 19th century as well as those published in the first part of the 20th century.

CAROL: You started to write a book about pardoning the Thanksgiving turkey and that concept changed as you got to know Tad better. Can you explain how that happened?

BETH: The turkey pardon story was a tender bit of father and son with some humor that resulted in the national tradition, but…I wasn’t finding a special heart angle to make the story resonate and matter in a special way. As I learned more about the antics of Tad Lincoln, how his mother referred to him as her “troublesome sunshine," his executive mansion adventures, his disabilities, rejection by others, and his joyful heart, I knew there was so much more to this little human than met the eye. As a teacher who has experienced the discovery of unexpected talents, depth, and humor beneath challenging behavior, I wanted to know more about this complicated child and showcase the contradictions he seemed to embody. Because we’re all complicated, right?

CAROL: Your bibliography is fascinating. Can you speak about your research process and how you found those primary sources?

BETH: Once I start digging in, I follow the trail of breadcrumbs from sources in bibliographies and search out the various names I encounter. It’s fortunate there are so many resources about Lincoln and so many accounts left by those who spent time with the Lincoln family. Most of those sources are people who were on the staff or frequently there covering the President. Tad never failed to make an impression of some sort, so he is often mentioned. A few of the officials loved him and doted on him, like Stanton who gave him a Union uniform. Tad often accompanied his father on outings, so journalists often noted incidents with Tad. There are Tad anecdotes sprinkled through writings from Lincoln’s secretaries, the boys’ baby sitter, Mary’s dressmaker, and more. Once you find who was with the family in the President’s House, you can search out those, and most are referenced in other books about Lincoln.

BETH: Scope is always an issue with an historical picture book. I like to take a short piece of time if possible so I can really delve into character. As I gathered the stories about Tad, and looked at how they fell on a timeline, I could see that during the year 1863 he transformed under the loving guidance of his father. Once I saw that, I dug for more from 1863, looking for the pieces of the puzzle, choosing the most meaningful, to make my heart thread sing. That was the year after Willie’s death (Tad’s brother), so both were grieving and they needed each other more than ever. Their relationship was intense and vital, humorous and joyful, tender and nurturing. 1863 also allowed me to focus on the relationship and all they brought to each other without having to bring in Willie’s death or the assassination. And at the end of 1863, Christmas, I had the climax moment with the turkey, and I found the perfect incident to use as the ending to tie that heart thread tightly and let it resonate.

CAROL: How have kids reacted to the book?

BETH: Kids have really loved the book! They totally understand the WRIGGLE! And some of the historical details are great surprises for them. I haven’t been able to experience their reactions in person due to the release during the pandemic, but the feedback I’ve gotten virtually has been wonderful!

Leave a comment (along with your name and email address if you are new to my blog) to enter the giveaway. If you follow my blog, I'll enter your name twice. Become a NEW follower and you'll also get a second chance. Giveaway ends May 2. Continental U.S. addresses only. If you're uncomfortable leaving your email address, please email me.
at April 28, 2022

I really like this book as well. I can see why kids are fascinated by it. Thanks for the interesting interview with Beth Anderson. I will pass on the giveaway since I already have a copy. Thanks for the post.

Awesome! I follow your blog via RSS feed.
Think my twins would love this book!

Thanks Hewi and Zach. I think all these boys would enjoy Tad!

I love this story, and how it’s based on this one component of the father-son relationship of a very famous father. My dad was the minister of a big church in a small southern town and I was afraid to wiggle in church with everyone watching!

Thank you, Melissa, for sharing that anecdote. Your name is in!

I knew nothing about Tad and his relationship with his father, and I'll be reading this book to learn more. Great interview--I especially loved learning how the book's direction evolved as she did her research.

I personally love reading anything Lincoln and I have some students that love history so this would be a wonderful addition.
Polly Hile

Thanks Polly, Carol, and Tammy.

This blog is great! I will look for this book and share it. Thanks so much for writing about these new works.
Annie

Thanks, Annie. I'd love to add your name to the giveaway list but I need your email address to do that.

Thanks for all the lovely comments! Tad's story just grabbed my heart. I hope it helps all of us see past the challenges to find the goodness in others.

Thanks Rosi and Beth for your comments. Beth--it's been lovely to host you!

This sounds like a wonderful window into a caring father-son relationship.

It is, Lois! Thanks for commenting.

I can't wait to read this book. Lincoln is my favorite president and I love learning new facts about his personal life.

I knew you'd like this book, Danielle. Even though I didn't know Lincoln was your favorite president!

My grandchildren love history and so do I. This book sounds like it's right down our alley.

You would love it, Gail!

I’ve been hearing wonderful things about this book! How fun to see it here! Great interview! Great work, Beth!

And now you have a chance to win it, Marci!

This looks like a great book that the whole family will enjoy!!

I think so, Trish!